For the strip of Whitehall Street nestled between Castleberry Hill and Mechanicsville just southwest of Downtown, the future is easy to predict. Redevelopment.

But redevelopment into what and for whom? A skyscraper-crowned mega-project freshly announced for the strip’s Downtown end is one kind of answer. Another future, however, might lie in the past.

A tactic called adaptive reuse is increasingly popular in the historic preservation world and is already familiar to Atlantans in the form of factory lofts and Ponce City Market. Partly preserving, partly transforming older buildings into new forms and uses is the idea. An adaptive use makeover on Whitehall is the focus of “Mechanicsville 2030,” an exhibit about Georgia Tech architecture students’ projects. 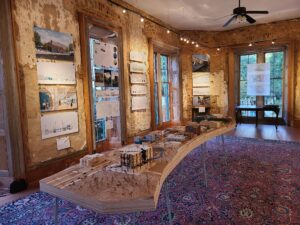 A model of the Georgia Tech student projects for “Mechanicsville 2030” on display within the Atlanta Preservation Center’s L.P. Grant mansion (Photo by John Ruch)

“The fundamental question that we’re grappling with here … is how do architects or planners or anyone stave off the negative effects of gentrification?” said Ryan Roark, the teaching fellow who led the studio projects. In neighborhoods where disinvestment now may flip into displacement, she says that adaptive reuse “keeps the scale and slows the pace of change.” And most importantly, the students’ version involved getting input from local “stakeholders” — residents, business operators and civic associations. (In that vein, the exhibit also will have an overview presentation at a local Halloween block party.)

You can see the vision — including a scale model of the remade street — for yourself through Nov. 17 at the Atlanta Preservation Center’s headquarters in Grant Park’s L.P. Grant mansion. Housing the exhibit within Atlanta’s oldest surviving house is a move intended to underscore that connection between old and new.

“I think adaptive reuse as a whole is going to be more and more pronounced in historic preservation,” says David Yoakley Mitchell, APC’s executive director. “You’re going to see a lot of [planners asking], ‘How do we take this older fabric and make it supportive of today’s needs?’”

For Whitehall Street in particular, he says, “this is really an opportunity to explore the role of stewardship and to understand it more in a visual way as opposed to simply academic — that [redevelopment is] not simply numbers on a sheet of paper that work or don’t work.” 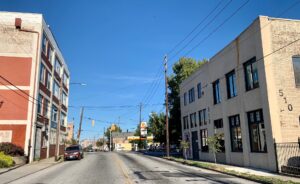 Whitehall Street near the McDaniel Street intersection as it appears today. (Photo by Kelly Jordan)

Whitehall is one of Atlanta’s oldest streets; part of it was later rebranded into a name you may have heard — Peachtree. The old industrial railroad-facing section between Northside Drive and Ted Turner Drive has aged into a neighborhood as eclectic and quirky as anywhere in this ever-surprising city. There’s a stable for carriage-ride horses and a factory that makes garden statuary and busts of everyone from Einstein to Darth Vader. There’s a DMV, a nightclub, a church, a dance studio, a former post office. There’s even some existing adaptive reuse: the Century Lofts in a former car dealership and warehouse.

There’s also a ton of vacant lots and empty buildings, including a few ruins consisting mostly of just exterior walls.

Developers are already taking notice, as news in just the past week showed. An LLC called Urbantec is pitching that mega-project for a partly polluted site locally known as Artisan Yards, with futuristic plans described in a recent Atlanta Business Chronicle story that tossed around terms like “digital infrastructure” and “technologically unapologetic.” At 515 Whitehall, another developer just proposed replacing a vacant lot with middle-income-affordable apartments with a green roof.

The Georgia Tech students, in their studios this spring and summer, had a lot more creative leeway, including freedom from parking requirements, but also more community-minded strictures. Roark has an eclectic background — she trained in cancer biology and literary translation before gear-shifting into architecture — and brings a similar comparative approach to the Whitehall project, where she was intrigued by the possibilities of such sites as the near-ruins. 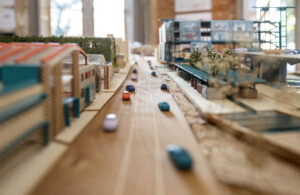 A close-up of the Whitehall Street scale model as seen in an class-commissioned photo by Mike Koenig.

Roark had each student team design a pair of projects, one an adaptive reuse and one a new construction, so they saw the “blurry line” between the new and the old. Some of the concepts were relatively straightforward, with housing and green roofs abounding. One vision transforms and expands the church into a community center, senior housing and street-front basketball court.

Other ideas border on the whimsical, like a tiny-homes factory whose workers can live in affordable micro-housing above it. And to make up for all the lost parking, Roark whipped up a garage with a public swimming pool beneath its pillars and glass boxes in its sides to hold locally relevant artworks and artifacts.

No one is likely to build such things, and that’s not the point. The real meaning is in the scale model of the street front, where the gaps are filled at a human scale and the new opportunities are created with the notion of including, rather than replacing, the locals. It also reflects some of the new trends in historic preservation, like the environmental aspect of not tossing an entire building into a landfill and burning energy to build anew. “I’m not an eco-warrior,” says Roark, but views the original building as material itself for construction. 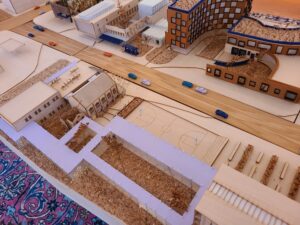 A detail of the church reuse as shown in the model. (Photo by John Ruch)

So far, the exhibit has attracted a few hundred people, including developer teams specializing in adaptive reuse.

Mitchell says that in a city rethinking its zoning codes, poised to vote in a new mayor, and undergoing such massive redevelopment as Centennial Yards, “the role of preservation is more important now than ever.” He says class projects like this one, displayed in an easily accessible place, can spark creative discussions about the role of Atlanta’s history rather than preservationists’ traditional “finger-wagging.”

“This project is kind of a nudge in the ribs to say, ‘Remember,’” Mitchell says.

Roark describes adaptive reuse as a way of remaking a community by making the community a key ingredient.

To see the exhibit at the APC, check the schedule of free tickets on Eventbrite. You can also check out an online summary.