In the Heart of It All: Midtown Program Invigorates Local Arts Economy, Street Life

Lillian Blades and Dr. Bojana Ginn, two Midtown Alliance Heart of the Arts residents, both have studio spaces inside the historic Crum and Forster building.

Take a walk down West Peachtree Street today, and you might notice that the number of public artworks visible is multiplying nearly as fast as new towers along the corridor. This is due in part to Midtown’s six artists in residence, who have officially moved their practices to new studios in Midtown and are busy creating new work here. .

These artists are part of Midtown Alliance’s Heart of the Arts program, a multi-phase initiative launched last December with seven temporary storefront activations. Our goal with the first phase was to bring color and energy to Midtown’s street level in the midst of a pandemic and a cold winter, when it was sorely needed.

We were encouraged to see that these activations were well received by the public, the arts community and Midtown property owners, who enthusiastically and graciously partnered with us to host these installations in their storefronts. Emboldened by this success, we took a big step and expanded the Heart of the Arts program with Midtown Alliance’s first ever studio residencies. 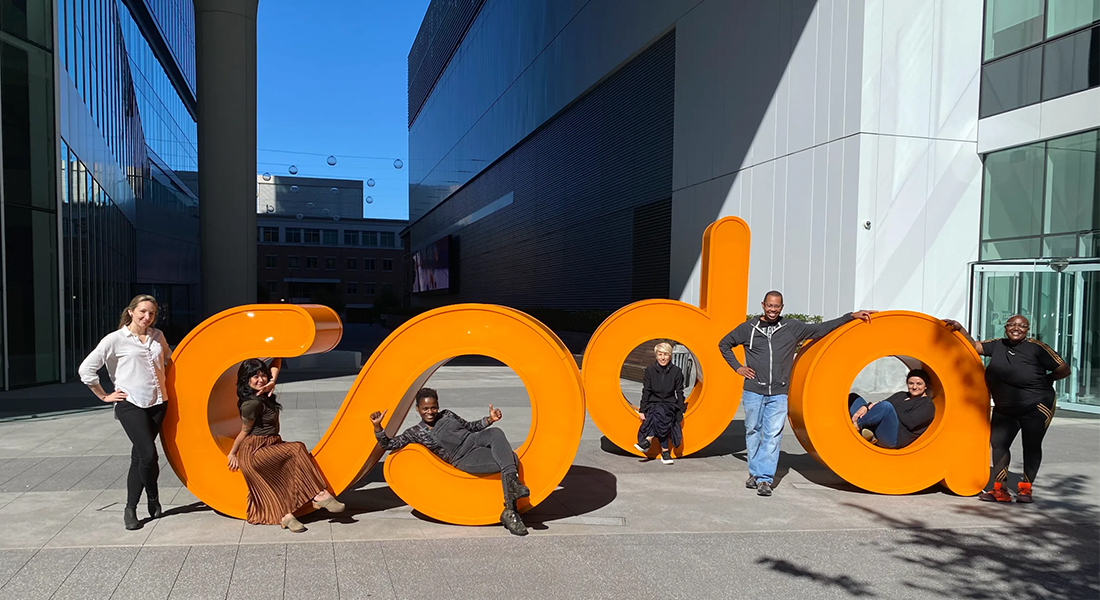 Six artists were chosen this summer to be part of our first cohort of artists in residence: George F. Baker III, Jamaal Barber, Lillian Blades, Dr. Bojana Ginn, Patricia Hernandez and Jasmine Nicole Williams. All of the artists are now settled in at their respective studios at Dewberry Group’s Peachtree Pointe, Databank, Portman Holdings’ Crum and Forster building on the Coda campus, and the Atlanta History Center Midtown Campus.

Each of them is already generating public facing artwork, which is incredible to see. Ahead of a major corporate announcement that turned out to be Cisco’s expansion at Coda, we worked with Portman to install some of the residents’ work inside their building’s common areas. A large mixed-media assemblage by Lillian now hangs in the windows fronting West Peachtree, where it will catch the morning light and filter bright colors through the lobby for the next few months.

Portman also commissioned new displays of work by Dr. Ginn, whose installations merge the science of wellness and technology with art; and Patricia, whose paintings portray her Latinx culture and Indigenous ancestry in ways that seek to bring people together. On the corner of West Peachtree and Armistead, Jamaal has several of his works on view in the windows of his studio. Similarly, Jasmine and George have animated the windows of their studios with bold, eye-catching original work.

It’s always exciting to see new public art in Midtown, but what’s special about this program is these residents are creating work that will often be displayed within eyesight of their studio. The Heart of the Arts program adds to the variety of opportunities by which Midtown Alliance can work with property owners to activate the street level and community facing spaces.

By partnering with property owners to dedicate physical workspace for artists, we’re offering opportunities that go beyond providing a wall to hang their art. We want them to build firm foundations, make supportive connections and become a part of the Midtown community.

And that’s exactly what they’re doing. Jamaal is now recording his podcast Studio Noize, launched in 2018, inside his studio at Databank, and recently hosted photographer Shoccara Marcus. Shoccara was previously the artist in residence at Cousins Properties’ Promenade building, whose program actually helped inform Midtown Alliance’s decision to launch a district-wide residency program. Hearing these two creative entrepreneurs with similar ties to Midtown was a wonderfully serendipitous moment.

Everyone is invited to get to know these artists and their work and to engage with them throughout their tenure in Midtown. We hosted our first public event, a studio crawl and exhibition, on October 2 during ELEVATE Atl, an event produced by the City’s Office of Cultural Affairs. Mark your calendars for December 4 through 6 for our next open studio event, and stay tuned for more details throughout the coming weeks, including future exhibitions and art sales.

We’ll also be looking to recruit property partners for the next wave of residencies soon. So, if you have vacant or underperforming space in Midtown available and you’re interested in learning more about our program, please send us an email.