By Maria Saporta and Douglas Sams
Published in the Atlanta Business Chronicle on Jan. 9, 2015

As demolition of Doraville’s 165-acre General Motors plant revs up, a picture is emerging of a proposed “city within a city” on the Atlanta Perimeter with transit, towers, plazas and parks.

With potentially up to 10 million square feet of mixed-use development over the next decade or more, it will be one of the most closely watched projects in Atlanta’s history. 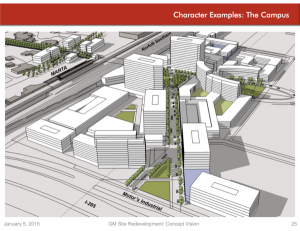 A conceptual rendering of a redeveloped GM-Doraville site (Special: the Integral Group)

Since the 1940s, the plant has stood at what’s now the convergence of Interstate 285 and Peachtree Industrial Boulevard near Buford Highway.

It began demolition about two months ago and will now pick up speed with a formal demolition ceremony scheduled Jan. 9.

The developers have yet to pick a name for the project.

It comes as the economy continues to improve, with more hiring and wage growth predicted this year for metro Atlanta. The new master plan is flexible enough to allow market demand to determine which phases and infrastructure improvements come first.

The plan calls for at least six districts connected to a central transit station, where some towers could rise up to 20 stories.

Along I-285, “the Campus” district offers the kind of access and visibility on an interstate that could lure the next big corporate relocation to Atlanta.

“The Commons” district would emphasize public spaces, such as parks and squares, walkable streets, bike paths and trails. Up to 40 percent of the project is dedicated to public spaces.

“The Yards” could retain pieces of the GM plant — built in the 1940s and operated until its closure in 2008 — for the sake of history. Those funky industrial buildings might also lure creative companies, including startups, that typically want space that links to the past and offers a sense of authenticity, a trend playing out in historic downtowns across the nation.

The spine of the GM redevelopment is the “Park Avenue” corridor.

It would run underneath the railroad tracks and the Doraville MARTA Station, potentially linking the project to Buford Highway and downtown Doraville.

“Every one of our designs is unique,” Stanton Eckstut, principal of Perkins Eastman, said about the firm’s diverse portfolio of projects.

But, he added, “We put a lot of emphasis on public spaces.”

The portfolio includes Wharf Waterfront in Washington, D.C., the largest project in the city’s modern history. It would bring the nation’s capitol the water’s edge, Eckstut said.

At Target Field Station in Minneapolis, Perkins Eastman designed a multimodal transit hub next to a historic warehouse district and Target Field, home of the Minnesota Twins. The project is touted as the Grand Central Station of the Twin Cities. It might also offer a glimpse of how transit will play a role in the GM project. “Our approach to transit is as a great public place,” Eckstut said.

The idea reflects the GM redevelopment’s biggest potential impact — connecting dozens of cities along the Atlanta Perimeter whether by transit lines, bike lanes or trail systems.

If successful, it would transform a section of the Atlanta Perimeter and the communities around it, which for years have been passed over for trophy office projects and creative mixed-use developments.

The central Perimeter has several MARTA train stations that have helped lure corporate relocations. Sandy Springs will become home to the new headquarters of of Mercedes Benz-USA and Dunwoody recently won the campus for State Farm Insurance Co.

Over the past year, Perry has told regional leaders the GM project could help unite the region, both geographically and politically.

Green streets – a possible view of the redevelopment of GM Doraville

“If you let the physical boundaries limit, constrain or define your thinking, you get sub-optimal thinking,” Perry told Atlanta Business Chronicle in the Jan. 6 interview.

The project, though a possible game-changer, will also face difficult hurdles.

That includes hammering out agreements between MARTA and the railroad operator Norfolk Southern, which has rail lines running through the GM site. At issue is whether Norfolk Southern will allow access through a lease or property transfer to create a pedestrian bridge, allowing residents from across the region to use the former GM site to connect by rail to existing job centers in Buckhead, Midtown and downtown.

They would also easily link to Hartsfield-Jackson Atlanta International Airport.

Another challenge is public and private funding to develop the project. This year Perry and the development team will address the infrastructure needs such as road, water, and sewer improvements.

One complex but critical piece of the development is the engineering work necessary to create Park Avenue. It will be costly to run the road at least 300 feet underneath the Norfolk Southern and MARTA rail lines. The development team could seek Doraville Tax Allocation District funding. Perry may also attempt to secure funding from the state legislature.

“I think there is a plan that could evolve where development could start as early as this year,” Perry said. “Obviously infrastructure investment can be funded in lots of ways.”

Previous Article
‘American Sniper’ – Clint Eastwood directs one of the best movies of 2014
Next Article
Leprosy, Not Just a Biblical Problem