In the 1880s, a dreamy question created the east Atlanta neighborhood of Inman Park: “What if… the streetcar connected downtown with a posh suburb?” 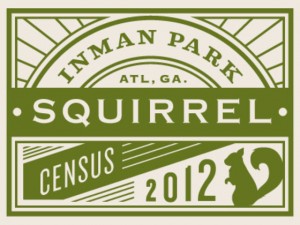 Today, a funky obsession has connected neighbors there: “What if all the squirrels came down from the trees and attacked us in an apocalyptic nightmare?”

From the imagination of local writer Jamie Allen came the acorn that grew into the Inman Park Squirrel Census. From this nutty (to some) idea unfolded a modern fable, a tale of harnessing curiosity and technology to transform how we see our surroundings.

Grounding their wildlife watch is some hard cash: through the social media incubator Kickstarter, the squirrel census recently raised $8,000 to form an LLC and print and sell vintage-style posters of where the squirrels are (part of the poster sales benefit Atlanta Wild Animal Rescue Effort).

Among 18,109 projects funded through $320 million from 2.24 million donors in 177 countries, the squirrel census was chosen Tuesday as one of Kickstarter’s Best of 2012. “Turns out there are even more squirrels than we thought,” the site notes.

“Why count squirrels? Everyone asks that question, and it’s a really good question,” says Allen, a 44-year-old writer who immerses himself in his subject matter.

“The long story is that [in summer 2011] I was working on a short story from a dog’s point of view about the day squirrels attacked us. A zombie squirrel apocalyptic thing. 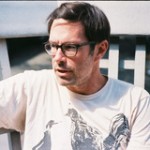 “After writing the story, I thought of how to tell a story through infographics that were online and dynamic, that readers could move and click through – an experiment.

“I needed to get some realism – how many squirrels are there? I called around, and no one knew. It was unsatisfying and strange. Given that this is a disease-carrying animal, you’d think we would have a general count that was semi-accurate.”

Obsession is often the fuel for an idea to become real. It drove Samuel Inman and Joel Hurt to finance and develop Atlanta’s first “garden suburb.”

The squirrel-possessed Allen started talking it up with his friends. (He partially blames his dog Sophie, who is obsessed with catching one).

Opinions of the species varied, from tree rats with bushy tails, to cute little furry buddies,  to vermin best served flat on asphalt.

“You can learn a lot about a person when you introduce the idea of a squirrel census,” Allen says. “One reaction is, ‘Why in the world would you do that?’ Another person will get it right away and absolutely want in.”

Count Stewart Haddock among the latter: “It surprised me by how some people think it is a totally ridiculous idea to count squirrels. It seems a reasonable thing to me.”

The chance for analysis drew Josh O’Connor, who lives in nearby Poncey Highland. 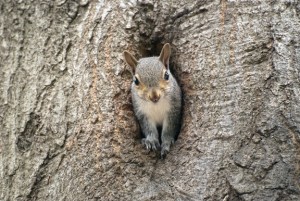 “Since I work in the conservation field — U.S. Fish and Wildlife Service — I was interested in using some scientific method in coming up with the population,” O’Connor says. “It sounded like a fun project and I would be able to get outside and geek out over some new data sets.”

From academia came Italian epidemiologist Donal Bisanzio, who is preparing a scientific paper on the Eastern gray squirrel (Sciurus carolinensis) as markers for West Nile virus. He fine-tuned the wildlife counting formula.

Other folks joined the community art and storytelling experiment to consider and find answers to what was pitched as one of life’s infinite questions.

“It’s been fascinating exploring the realm between scientific/mathematic data and storytelling,” Laura Straub says. “A few things surprised me. First, the number of squirrels in Inman Park. Second, how many Inman Park residents seem to really hate squirrels. Third, the fact that to handle a squirrel in the city you have to have a permit.” 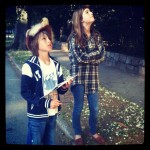 How do you count squirrels?

As detailed on their website, the volunteer squirrel counters set out with clipboards and peeled eyes on April Fools Day 2012, each looking for bushy-tailed rodents in 151 discrete quadrants of the .59 square mile that is Inman Park.

Over several weeks, multiple counts were made during the most active periods of mid-morning and late afternoon/early evening. Estimated squirrel abundance: 861.

They took notes of numbers and behavior.

“The squirrels here don’t seem to care about anything except goofing off!” one census taker exclaimed. 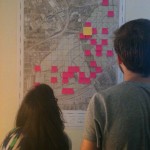 Where the squirrels are in Inman Park.

“The newly added dog park really changed the lives of the squirrels here,” said one counter. “A once vast, fruitful area for acorns is now populated with predators taking poops.”

The census team decided not to worry about double counting squirrels. A bigger issue was accounting for those hidden in nests, trees and attics.

More important than the number of squirrels was telling their story – and using that story to connect Inman Park neighbors.

“The census is not just about squirrel population, it’s about getting out in your neighborhood and viewing it with your neighbors in a whole new light,” O’Connor says.

“If more neighborhoods would participate in projects like this, a better sense of community would be developed. It kind of gives you that nudge you need to talk to your neighbors, even if it’s about something as crazy as the squirrels in their attic.”

The project moved from treetop to desktop and laptop via a team of volunteer writers, designers and a web programmer/artist.

Turning a whimsical question into numbers and drawings involved tapping their trunk line of collective creativity and working together to tell the story in a simple, powerful, attractive way. 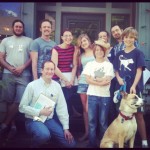 Squirrel census takers in Inman Park say the project has helped them appreciate the ordinary sights of daily life. “They are survivors,” says Jamie Allen. “They hunt for food all day and hope not to get run over or snapped out of a tree by a hawk. When you see them from that vantage, squirrels have tons of stories to tell.”

The census project “changed me,” Allen says. “As a writer, I am a control freak and just want to tell the story I want to tell. This [squirrel census] is the complete opposite. It’s the collective story. None of us are directors of anything. When people come up with amazing ideas, we all say, ‘Yeah, absolutely….”

Graphic artisans collaborate to produce the viral memes so many of us forward across social media. These are the fun and funny images that help us stay connected and lighten and enlighten our daily life. They offer humor by presenting an everyday sight, like a squirrel, in a surprising new way. 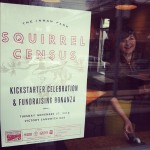 In November, the Inman Park Squirrel Census celebrated at the Victory Cafe raising almost $9,000 through Kickstarter for the printing of vintage posters.

Memes end up jumping like squirrels, from text to email to post to Tumblr. Squirrel even sounds like SQL, the programming language that helps manage data.

With a sizable donation from MailChimp, a Web-based e-mail marketing company in Atlanta, the census takers and mapmakers are putting their digital data into old-fashioned 38×51-inch map prints with a retro design by Nat Slaughter.

Thus one guy’s quirky synapse leap has ended up linking nature and numbers, certainty and randomness, neighbor and stranger,  modern and traditional.

Regardless of how many are around us, Allen has found in the ubiquitous lawn pest to be a provocateur, resourceful and inspiring.

Squirrels “are survivors,” he adds. “They hunt for food all day and hope not to get run over or snapped out of a tree by a hawk. When you see them from that vantage, squirrels have tons of stories to tell.”