Image from "A is for Ancestors: My Black College ABCs" Credit: Dr. Erica Stoval White

The book’s purpose is to introduce a new generation of children (and some adults) to the possibilities that Historically Black Colleges and Universities can provide.

A new children’s book, “A is for Ancestors: My Black College ABCs”, uses an interactive approach to teach young children about Historically Black Colleges and Universities (HBCUs). Written by psychologist and former college professor Dr. Erica Stoval White, the book gives children ages four through eight a glimpse into the importance of  HBCUs.

“As an educator, when you want something to stick with somebody, you have to make it personal,” White said. 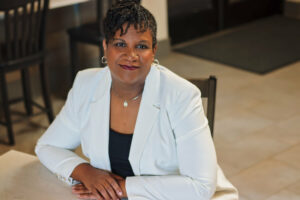 Inspired by a Christmas book gifted to her older daughter when she was a toddler, White tells SaportaReport that the rhyme scheme of the story was an opportunity for her to teach her baby about something near and dear to her heart.

A graduate of an HBCU herself, White said the subject matter and format were a great fit. “I just had to read it over and over again,” she said, “ I thought, I love Spelman, and I love HBCUs. So I would love to create an avenue to educate her about HBCUs early in life.”

A is for ancestors on whose shoulders we stand.

A third-generation graduate, HBCUs are a significant aspect of White’s life. The Spelman alumna, White said that The Atlanta University Center (AUC) has been influential in her adult life.

“The AUC has been at the center of so much change not only in Atlanta, but I think across the world in terms of setting the pace and trends and things like that.”

White continued, “people say their kids don’t learn about [HBCUs] until later in life, especially if you don’t live near them. They just don’t know about them. So I thought here’s a great way to introduce and to have some conversation about it.”

White uses vibrant pictures and creative rhymes to showcase the 101 remaining HBCUs and explains to children what they can anticipate when they attend an HBCU in the future. 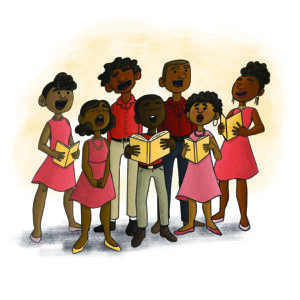 Image from “A is for Ancestors: My Black College ABCs”
Credit: Dr. Erica Stoval White

B is for books. They help our knowledge expand.

“Those questions,” said White, “are what makes it personal for kids where they can say ‘oh yes! I’ve done [such and such]’ and that sticks with them. That also allows adults to communicate and share about their life.”

It was also paramount for White to create a reader’s guide for parents and teachers to help older children explore the history and value of an HBCU education.

Representation was also crucial for White. She wanted to make sure that the male-to-female images were executed evenly throughout the book. She also asked the illustrator to draw a yellow honor cord on the boy’s cap and gown when approving the cover image.

Her reason for this addition was to “have an image of what success looks like when you graduate. You can graduate with honors. So there was a lot of intentionalities to have an impact.”

White says now is a great time to teach kids about HBCUs.

“What we know is that HBCUs aren’t just for Black folks. I think a lot of people now have come to see the value of education.”

She continued, “in our post-George Floyd world, I think there has been an awakening in some who probably thought they were ‘woke’ before that who now ‘oh wait I didn’t even know there’s this whole thing.’” 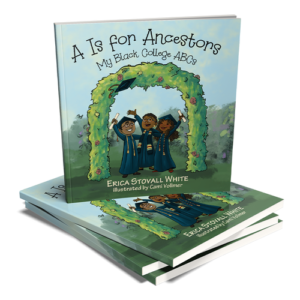 A stack of the book “A is for Ancestors: My Black College ABCs.” available in hardcover and paperback.
Credit: Dr. Erica Stoval White

White wants to make sure that every child learns about HBCUs and has a way for adults who do not have children to pay it forward also.

The “A is for Ambassador” program allows readers to donate a copy of the book to a child, library, classroom or entire school.

“You probably know an elementary school that has some little kids who could use a book,” said White, “or maybe has a library that could use some books so I have a program where people can donate books to schools.”

“A is for Ancestors: My Black College ABCs” on sale at Amazon or White’s website.