Women continue to face challenges as political conflicts and the global pandemic have eroded some of the progress gained in the past decade.

The International Women’s Forum brought Atlanta leaders together Thursday afternoon to provide an update on the “Global Status of Women” in a three-hour program at the Georgia-Pacific Auditorium with a focus on the challenges related to Afghan refugees who came to Atlanta after the Taliban took control of the country last August. It was IWF’s third annual International Women’s Day program.

“In the last two years, we have lost a lot of ground,” Nunn said about the global state of women, but she added there has been incremental progress over the last decade. Ten years ago, one out of every four girls got married by the age of 18. Today, the percentage of child brides has decreased to one in five girls. Nunn said this shows progress, but there was still a lot of room for improvement. 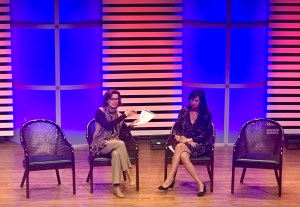 Paige Alexander, president and CEO of the Carter Center, began her role during the pandemic — returning to her hometown of Atlanta after 35 years of serving in multiple international posts.

Alexander said Atlanta has several “strong women” in key roles, mentioning Jill Savitt, president and CEO of the National Center for Civil and Human Rights, among others.

“Atlanta today is a little different than the Atlanta I left in 1984,” Alexander said. “What brought us here is a sense of belonging.”

The Carter Center and CARE work to improve the lives of women and girls around the world as a way to combat poverty by offering them more economic opportunities.

But the global pandemic has hindered some of those improvements.

“Our gains are very fragile,” Alexander said. “Fewer women were employed in 2021.”

Plus, society’s needs are changing. Nunn said the modern-day CARE package would probably include a smartphone rather than the traditional food or supplies provided decades ago. Women need to have “equal access to technology,” she said.

Both Nunn and Alexander said that given the number of international nonprofits in Atlanta, the city can solidify its global standing through greater cooperation.

“We have this opportunity in Atlanta to be the center of the global health universe,” Alexander said. “This is a really important time for us.”

“We really are a global city,” Nunn said, adding that it’s a selling point for Atlanta in recruiting young people. “This is a place where you can change the world.”