On Saturday, March 26, the Islamic Speakers Bureau (ISB) Atlanta will host its annual gala to spotlight influential Muslims in Georgia. This year is extra special because the organization is also celebrating its 20th anniversary with the Atlanta community.

The Gala will reinforce the organization’s larger mission of creating a world where everyone values and appreciates one another.

This year’s theme is 100 Influential Georgia Muslims, which builds off those who were previously highlighted during the 2014 Gala. This year, 43 Georgia Muslims who are making positive strides for their communities will be added to the list. Honorees range from all walks of life, including community activists, tech experts, health professionals and business leaders.

“One of our supporters really recently described ISB Atlanta as a convener of communities,” said Nabile Safdar, Chair of ISB Atlanta’s board of directors. “It’s one of the most diverse galas that you’ll be able to go to. The idea is to show folks inside of our community, ‘Hey, you may not realize you have all these rock stars walking amongst you.’” 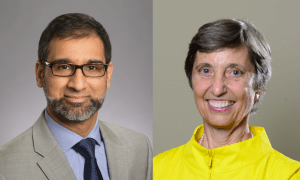 Attendees can expect a night of good food, connecting with neighbors and powerful conversations.

“We will showcase Islamic leaders and incredible presenters who are civic and community leaders,” said Ann Cramer, ISB Atlanta’s senior consultant who is an active member at St. Luke’s Episcopal Church. “Not only is it festive, folks come in the most gorgeous outfits that make your heart and eyes go pop.”

ISB Atlanta’s 20 Under 20 will also join in on the festivities to represent members of the younger generation who are blossoming community leaders. The Gala is a way to celebrate changemakers, while also breaking down social barriers and stigmas surrounding the Islamic community. 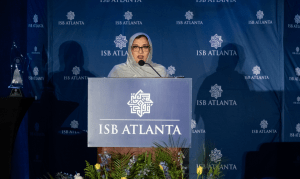 ISB Atlanta was started by Executive Director Soumaya Khalifa in August of 2001, just weeks before 9/11. It then became even more critical to correct some Americans’ misconceptions toward the Muslim community.

Cramer, who has been involved since the organization’s inception, said, “After 9/11 in 2001, we had to do something to show how amazing our colleagues who were Muslim are, who are such amazing people and making extraordinary contributions.”

And some of those prejudices continue today. Safdar describes being Muslim as an “instantly politicized identity.”

He gives an example from his social media feed.

“I’ve noticed on my social media, there are some national corporations who are doing routine social media marketing,” Safdar said. “I noticed that people sometimes like and comment, but if there is a woman wearing a hijab in the picture, the comments go into the thousands.”

He continued, “I’d love to report to you that the comments are all incredibly supportive of that image, but that’s just not the case. There are a lot of comments that immediately questioned why this image was used in an American context, but meanwhile, it’s just a woman who’s going shopping at a grocery store.”

For those reasons and “maybe an abundance of caution,” as Safdar puts it, the exact location of the Gala is only disclosed to those who register for the event.

The organization has grown tremendously in the past 20 years — beginning as a speakers bureau and now serving as something much larger — and its future looks bright.

“Twenty years is a great milestone. It shows the staying power of the organization,” Safdar said. “The organization has almost outgrown its name, but that’s the name that people know, and we’re keeping it how it is.”

Over the next 20 years, Safdar envisions continuing to grow ISB Atlanta while also engaging folks from all facets of the community.

“Atlanta has always been a great city for community building and organizing and building bridges,” he said. “I think [now] is a great opportunity for our corporations to really start to make an investment. That includes partnering with nonprofits, faith communities and local governments to put their resources where their mouth is. It’s not just about money. It’s about time, paying attention and listening.”