It’s July 4, 1966 — when a cursor was a potty mouth and Spaghetti Junction was a hip, now-and-wow Italian eatery in Decatur

A stack of physical newspapers. Remember those? (Image via Unsplash.)

To prepare ourselves for yet another 4th of July celebration in our fine city, let’s take a stroll down memory lane and hit up the Way Back Machine for insights into how we celebrated our patriotic holiday in 1966. In many ways, 1966 was a pivotal year in Atlanta history, and as a Mercer University history major, I’m a big fan of pivotal years.

In Governor Carl Sanders and Mayor Ivan Allen Jr., the state of Georgia and Atlanta were blessed with the exact right leaders at the exact right moment in time. Messrs. Allen and Sanders shared the same goal — to make certain Atlanta was regarded as not only the capital city of Georgia but also the entire “New South.” 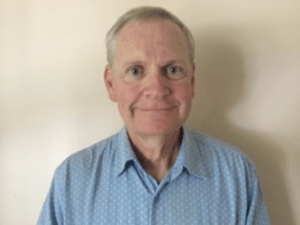 Bo Hiers is a semi-retired marketing officer in the reinsurance industry.

For that to happen, Allen and Sanders knew Atlanta and Georgia needed vastly improved race relations, a top-notch international airport and professional sports teams. The dynamic duo knocked it out of the park in all three categories. Had they not, we might have spent the past 56 years cheering on the Birmingham Braves and Falcons, and driving two hours and change west on I-20 to grab a non-stop to Los Angeles or London.

Many platitudes have been written through the years about Ivan Allen Jr. and Carl Sanders, so let’s focus on a few random, fun facts about each great man (thank you New Georgia Encyclopedia!) And no way we’ll let the fun stop there! Let’s also take a quick look at the combined July 4th edition of The Atlanta Journal and The Atlanta Constitution (thank you Newspaperaarchives.com!) to check out the fun stuff — the sports page, TV and movie listings, the want ads, plus a bonus dose of tough love from Ann Landers.

I’m telling you — this is good, clean fun! 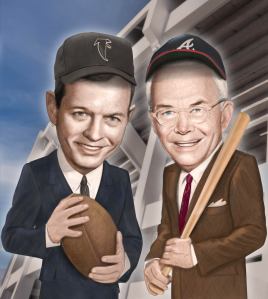 Sports Page — the Braves, Falcons, The Firecracker 400 and a hanging ‘Dimwit’

The very first thing my 12-year-old self did in 1966 with the Atlanta Constitution was find the sports page. Now that I’m well into my 60s, I would like to report at least a modicum of maturity over the decades, but guess what? The very first thing I do when I open the paper in 2022 is…find the sports page! And the first thing I check during the summer is the baseball standing. The 1966 National League standing looked nothing like today’s standing for the simple reason there were no divisions in 1966. We were still a few years away from divisions in ’66. Instead, there was simply the National League and the American League.

A quick look at the National League standings revealed the Braves were a whopping 14 games behind the league-leading Giants, with the Pirates, Phillies and Dodgers giving chase. Thanks to Sandy Koufax, the weak-hitting Dodgers would ultimately claim the NL pennant. But by the time they played their first World Series game, the Dodgers had nothing left in the tank from all that chasing and were swept by the Orioles. 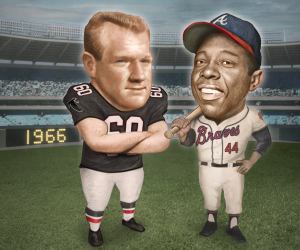 The ’66 Braves were loaded with offensive firepower with the likes of Henry Aaron, Rico Carty, Joe Torre and Felipe Alou. Unfortunately, the pitching was mostly so-so, and the Braves were far from a complete team. For more complete teams, check out the 1995 and 2021 Atlanta Braves!

The front page of the July Fourth sports page had this screaming headline: A ‘Grand Day’ For Cloninger, followed by the subtitle Tony Uncorks 2 Grand Slams!  The Braves pitcher went nuts on July 3. Not only did Cloninger whack two grand slams, he threw in an RBI single as well. If you’re keeping track, that’s 9 RBIs in one day! But that’s not all, he also pitched a complete game (remember those?) in a 17-3 beatdown of the Giants. Have yourself a day, Tony Cloninger!

The freshly-minted Atlanta Falcons also dominated the sports pages. The Falcons’ training camp in Black Rock Mountain, N.C., was well underway. Among others, the Falcons were pinning their hopes on Tommy Nobis, a supremely talented All-America linebacker from the University of Texas, and Ernie Wheelwright, a top-notch running back who was joining the team from the New York Giants. Alas, things didn’t pan out, and the Falcons went 3-11 in 1966.

Back to baseball news! Cincinnati Reds fans were hopping mad at its owner, Bill DeWitt, for losing his mind and trading away future Hall of Famer Frank Robinson to the Orioles. Exactly how mad were the fans? So mad they hung DeWitt in effigy in downtown Cincy with the word “Dimwit” written across the chest. That’s plenty mad!

In other sports news, Lee Roy Yarbrough was on the pole for the Firecracker 400 in Daytona after leading the pack with a top qualifying speed of 178.660 mph. The race was to begin at 10:00 a.m. For the record, Yarbrough didn’t do all that well in the actual race, finishing 24th. Any idea who won? Sam McQuagg, that’s who!

Wait! Don’t even think about leaving the sports page yet — not before we check in on the baseball stats! Rico Carty was hitting a torrid .326, second-best in the league. Carty was in tall cotton with names like Willie Stargell, Joe Morgan, and Roberto Clemente also near the top. Surprise! Hank Aaron was leading the NL in homers, with 25. Torre wasn’t too far behind Aaron, tied at 19 homers with some guy named Willie Mays.

The best of the rest — Fireworks, Dear Ann, Want Ads, plus your TV and movie options

Any time you open a newspaper from a different era, you’ll be enlightened to not only the heavy news of the day but also the culture of the times. The July 4th, 1966 combined edition of the Atlanta Constitution and Journal is no exception. It’s all there. Ominous news from Vietnam and local politics — Bo Galloway was launching his bid for governor — dominated the news pages. But we’re sticking to the fun stuff, remember?

There were far fewer options for fireworks than we’ll have this July 4th, but keep in mind Atlanta’s 1966 metro population was roughly one million compared to today’s roughly six million. The main downtown attraction for fireworks was actually the rooftop of the National Bank of Georgia (the NBG building). The primary suburban options were — you guessed right — Lenox Square Mall and Stone Mountain. At Lenox, you had the added musical bonus of The Atlanta Band. Music was to begin at 8:15, followed by fireworks at 9:15. Kaboom!

If fireworks weren’t your jam, you had your pick of a variety of good flicks to choose from. Even though ’66 was a fairly lame year for movies in terms of runaway blockbusters, the July Fourth options offered everything from screwball comedies like The Russians Are Coming, The Russians Are Coming at Lenox (the Rocking Chair Theatre!) arguably a Top 10 comedy of all time in A Shot in the Dark with Peter Sellers at Plaza Theatre, a sprawling romantic classic in Dr. Zhivago was featured downtown at the Loews Grand, and Nevada Smith, a more than decent western with Steve McQueen was showing at The Fox. True story: After watching an old Steve McQueen movie with his family, Yogi Berra said, “McQueen looked really good in that movie. He must have made it before he died.”

Given there were only three television stations in Atlanta in ’66 — that’s not a made-up story — the television options for that Monday night were surprisingly good. Choices on Channel 2 included “The Popeye Club” with Officer Don for cartoons and fun (watch out for the dreaded Ooey Gooey Bag!) “Huntley and Brinkley” for the national news, and “The Tonight Show” with Johnny Carson for laughs. Channel 5 offered “The Outer Limits” for scares, “Petticoat Junction” for laughs and “The Red Skelton Show,” an actual variety show (what’s a variety show?) Not to be outdone, Channel 11 offered a war drama, a military comedy, and a first-rate thriller with “Combat,” “F Troop” and “The Fugitive.” Just know that if you wanted to channel surf, you would need to get out of your chair and manually change the channel.

The Want Ads were the place to go to find just about everything in 1966, including jobs, cars and a hip place to live. And before you lose your mind over the super low prices, do keep in mind the median annual salary in Atlanta in 1966 was $7,400. If you were looking for an apartment, Peachtree Gardens near Oglethorpe University offered a three-bedroom for $109.50. Best of all, it included a swimming pool! If you were in the market for a home, a three-bedroom, two-bath home with a private fenced yard was available on LaVista Ct. for $32,500.

How about a new car? Nalley Chevrolet on Stewart Avenue claimed to be practically giving away cars! A new ’66 Impala for $2,203?! This can’t be real! Not to be beaten, Hub Ford on Peachtree had brand new Mustangs available for as low as $2,218 and new Galaxie 500s for $2,289. Personally, I would have gone with the chick-magnet Mustang, but as a rising 7th grader, I’d have to be content with my red J.C. Higgins bicycle and skateboard equipped with really loud, spark-inducing metal wheels.

Hold on! You’ll need a job to pay for your new ride and a place to live, and there were plenty to choose from in the Want Ads. Southern Bell had multiple openings. Clerks and telephone operators earned a starting weekly salary of $320. In addition, high school graduates between 18 to 26 could apply at the Southern Bell office in Ivy Street for a position in the “dynamic communications field.” I’ll mention two more: Emory University was seeking a Police Patrolman, but you better not have a police record or military obligation, and you must be in the 23- to 35-year age range. IBM was looking for technicians. New hires even scored a car and your own territory.

How about some tough love from Ann Landers for Mrs. Anonymous, a newlywed who asked if it was OK if she divorced her husband because an accident left him impotent? I’m paraphrasing here, just know that Miss Ann’s basic message went something like this: “Oh hell no. Remember that whole “in sickness and in health” part of your marriage vows? Well, this is a sickness, so adopt a couple of kids and get over yourself.”

For those as privileged as myself, July 1966 was not a bad place to hang out — even if you did have to rise up from the sofa to change the channel. But hey! Just think of how happy your 2022 Apple Watch activity tracker would be with the 1966 version of yourself. All those extra steps to and from the lowboy console TV would actually count for more than just a different television show.

Best of all, no one would have ever asked “Where did you put the dad gum remote control?” Now that’s music to my ears.