It’s time for Atlanta, Fulton and DeKalb to retake control of their own destinies

During the transportation sales tax campaign, Mayor Kasim Reed was fond of saying that Atlanta has always been on the right side of history.

And then he would list any number of milestones in Atlanta’s history that catapulted the whole region into a global sphere — a major airport, a stadium that attracted the Atlanta Braves and the Atlanta Falcons to town; a rail transit system and the Olympic Games to name a few.

And all those investments fed off each other. Atlanta never would have gotten the Olympic Games had it not been for Hartsfield-Jackson International Airport or the MARTA rail and bus system.

What Reed did not say is that just about every major initiative in metro Atlanta originated from the region’s core. It was the City of Atlanta — often joined by Fulton and DeKalb counties that lifted the region to a higher plateau.

The regional transportation sales tax was a rare opportunity for the 10-county region to invest in metro Atlanta’s future. And the tax went down in flames — 62 percent to 38 percent in the 10-county area — failing in all 10 counties.

But a preliminary precinct-by-precinct analysis of the vote by the Atlanta Regional Commission shows a slightly different story. (See map on the right, and click on it to make it larger). 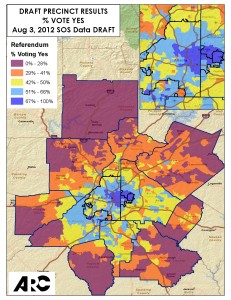 Areas in dark blue passed the regional sales tax by at least 67 percent; and areas in lighter blue supported tax by between 51 to 66 percent. The breakout box shows how people voted inside the perimeter. (Draft precinct results compiled by the Atlanta Regional Commission).

In the City of Atlanta, the tax passed by 60 percent to 40 percent. Not only that, the map shows that the area inside I-285 generally favored the tax while support declined in concentric circles surrounding the core.

There’s a lesson in these results. The core of the region continues to be willing to invest in its transit and transportation infrastructure.

That is over and above the penny sales tax that the City of Atlanta, Fulton and DeKalb counties have been investing in MARTA for more than 40 years.

The relationship between the City of Atlanta and the rest of region has had its ups and downs over the years. Over the past 15 years, leaders in the Atlanta region have worked tirelessly for the good of all.

Two stellar examples come to mind — the unanimous agreement for a regional transit plan known as “Concept 3,” and the ability of the 21 members of the Regional Atlanta Transportation Roundtable to agree on a list of 157 projects with about half being invested in transit and half in roads.

But the referendum was a rude awakening that people voting in the July 31 primary did not have a similar regional view.

For the City of Atlanta, it might be time to take a page out of former Mayor Shirley Franklin’s playbook.

When she was elected mayor, Franklin pledged to be a regional player — spending a great deal of time in her first two years in office building relationships with colleagues throughout the 10-county metro area.

Then in August of 2004, Franklin shifted her focus from the region to the city.

“I’ve spent a lot of time working on the region,” Franklin said at the time. “It’s time I could spend building Atlanta.”

She expressed her frustration by questioning whether the region was going to “just muddle around on this transportation plan.”

Franklin even acknowledged her shift in a 2004 talk to the Atlanta Rotary Club.

“Atlanta is going to be so clean, so safe and so wonderful that people are going to want to live here,” Franklin said. “I’ve shifted in the last six months. I’m planning to make Atlanta so great that the people who have a choice are going to live in the city.”

It’s eerie to revisit Franklin’s ruminations while we’re in this post-mortem of the transportation tax.

Eight years ago, her “to do list” is virtually identical to our current “to do list” — the multimodal station, the BeltLine, the Peachtree Streetcar, a civil rights museum, affordable housing, parks, the homeless, jobs, MARTA, schools, air quality, the arts and the hospitality industry.

Unlike many other parts of the region, the city has welcomed greater density with affordable housing built along public transit lines creating healthy walkable communities.

As Mayor Reed decides how to proceed after Tuesday’s election, he could find himself at the same place where Franklin was in 2004 — looking for ways to control the city’s destiny — with or without the rest of the region.