J. Mack Robinson celebrated as a giving man with humility and integrity

The memorial service celebrating the life of J. Mack Robinson on Friday captured the essence of the man — someone who succeeded in several lines of business but never let that success change his humble, self-effacing nature.

Ambassador Edward Elson, his friend for nearly 50 years, described Robinson as a “quintessential American hero” who could have emerged from a “Jimmy Stewart movie from the 1930s.” 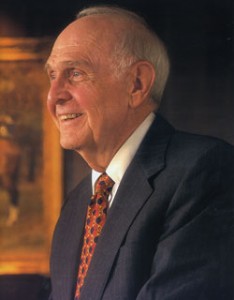 “He was at home anywhere,” said Elson, adding that he would mingle among presidents and princes as well as corporate moguls. “Yet Mack never seemed to understand how he got there. He never could fully appreciate his own genius. He was always so surprised by his own success.”

Elson recounted a little known story of when Robinson attended a gathering at a Parisian opera house to celebrate the life of fashion designer — Yves Saint Laurent. Robinson was sitting alone and unknown to glitterati around him.

At one moment the house lights went dark and  a spotlight shined on one person — J. Mack Robinson. Yves Saint Laurent then told the audience that it was Robinson who had initiated his career — a statement that stunned both the Parisian audience and Robinson alike.

Elson went on to say that Robinson “was successful but never arrogant; a business genius but never self-important; he was pious yet earthly; his joy was in being able to help others.”

Robinson lived the words — to whom much is given, much is required.

“On the balance sheet, Mack left us a rich man — no in currency, but more importantly in his deeds,” Elson said. “We surely will never know of all the good deeds he performed.”

His grandson ended his talk by calling his grandfather his “personal Valentine.”

David Sapp, who retired as senior pastor of the Second Ponce de Leon Baptist Church a couple of years ago, said it is unusual for someone to be both successful in business without giving up his inherent goodness. A major daily newspaper described Robinson as a “tycoon” in the headline, but Sapp said that did not describe Robinson.

“He was a humble man,” said Sapp, who recalled when he first introduced himself to Robinson when he became the church’s pastor in 1999.

Whenever Sapp tried to call him Mr. Robinson, he got the same answer: “I’m just Mack.”

“He found significance more in what he gave than in what he made,” Sapp said mentioned Robinson’s gift to Georgia State University’s business school as well as the church’s capital campaign.

Sapp also talked about Robinson’s love for his wife of 54 years — Nita.

“Nita met Mack after he was already successful and renowned,” Sapp said, adding that Nita described their encounter the following way. “He got interested in me because I didn’t know who he was, and I didn’t fall all over him.”

Then Sapp added: “Well Nita, he made a fantastic choice.”

The first time I interviewed Robinson was when he and Nita had been named Philanthropists of the Year in 1994.

It was Robinson who first helped me appreciate that being a serious philanthropist was actually a difficult job.

We were sitting in his office, and he took out a three-inch thick, three-ring notebook filled with letters from people asking him from donations to their different charities.

Over the years, we had many interviews and off-the-record lunches — about the future of Wachovia Bank (that didn’t quite turn out the way he would have wanted it to), about state and national politics, about Georgia State University as well as the future of the news media.

The last time we had lunch at the Peachtree Golf Club he was rather down about how his investment in Wachovia had turned out — at one time he had been the largest individual shareholder in Wachovia and much of his wealth had been tied up in the bank.

But when the bank’s stock took a nose dive, Robinson was looking back over his business life with a melancholy longing of how he could have created his own banking empire when he owned 22 banks in the Atlanta region.

In the past couple of years, Robinson was afflicted with Alzheimer’s — which was hard for all of us who knew what a sharp mind he had enjoyed throughout most of his life. But the sweetness of his character was always with him.

When the family received friends at the High Museum of Art after the service on Friday afternoon, Nita told me a story that described Robinson‘s generous nature.

That was Robinson until the very end. A man who knew that the more you give, the wealthier you become.