James Quincey set to become chairman at Coca-Cola: ‘It’s another step in a process’ 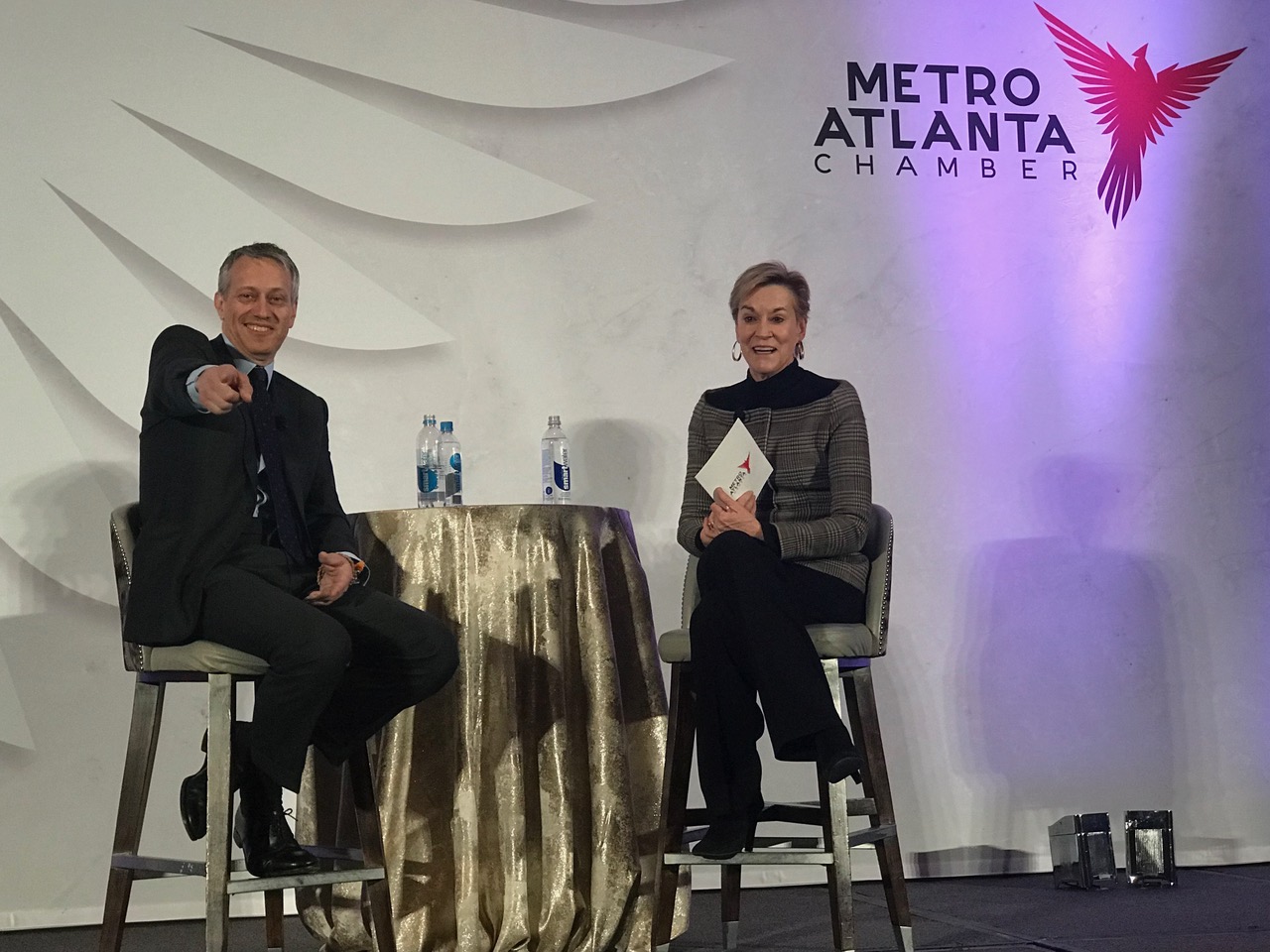 At the annual meeting of the Coca-Cola Co. in Atlanta on April 24, James Quincey will assume the role of chairman in addition to being CEO – consolidating his leadership of the beverage company.

Quincey is a different kind of leader than several of predecessors – one who prefers wearing jeans to three-piece suits and one who invites his employees to take risks, knowing that not all will succeed.

“I’m guilty of being more casually dressed than some of my predecessors,” Quincey said in a telephone interview on April 9.

“Apart from my own personal preference, each employee needs to feel they come to work ready to give their best. It’s also part and parcel of continuing to push the culture to being increasingly focused on the external world and open to change and new ideas,” he added. “In a way, it’s the symbolism that matters, rather than the dress itself.”

Quincey is succeeding Muhtar Kent, who served as Coca-Cola’s (NYSE: KO) CEO from 2008 to 2017 and who will step down as chairman at the 2019 annual meeting. Former U.S. Sen. Sam Nunn (D-Georgia) also will stepping down as the company’s lead director after serving on the board since 1997. 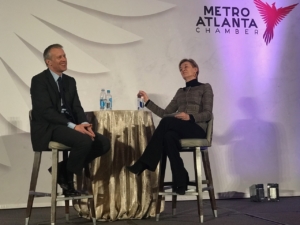 James Quincey, CEO of the Coca-Cola Co., in a conversation with Hala Moddelmog, CEO of the Metro Atlanta Chamber (Photo by Maria Saporta)

“It’s a great compliment they want me to lead the board and be the 14th chairman of the company and take over for Muhtar,” Quincey said. “It’s another step in a process that’s been well-signaled and telegraphed.”

Both Kent and Nunn described this transition as one of the smoothest in the company’s recent history.

“Each leader needs to be chosen for the time period of the enterprise,” Quincey said. “I know the board spent a lot of time, obviously led by Muhtar and Sam, thinking about what leadership is necessary for the next stage of growth in The Coca-Cola Company. Part of choosing me was that I represented the changing of the baton to another generation and to another style that’s needed for where the business needs to be taken to.”

Coca-Cola has been shifting from a company focused on its flagship brand – Coke – to one with a multiplying portfolio of beverages – often tailor-made for local markets around the world. The goal is to ensure Coca-Cola is a growth company rather than a stagnant one.

Taking risks is part of the equation.

“Whether we succeed or indeed fail, we should see that as an opportunity to say, ‘What did we learn?’ Now if you keep making the same mistake over and over again, I’m probably not going to be too impressed,” Quincey said. “The question is, are we learning and finding our way ultimately to build better leadership positions for our brands?”

Quincey called it “a tricky balance” to run a global enterprise that is locally nimble and able to meet consumer needs in a myriad of markets.

“That’s the puzzle of being in multiple categories all across the world and being able to flex between global and local,” he said. “Continuing to get that right will be a key part of succeeding into the future.”

Meanwhile, the core brand of Coke is holding its own as the company introduces variations on the theme – from Coke Zero to infusing it with coffee. Quincey said it’s part of the company’s journey to continue making Coke relevant.

Quincey is proud Coke had its best retail sales year in 2018, growing globally by 6 percent on top 4 percent growth the year before and 2 percent in 2016.

“So Coke has momentum at the retail level, and I think that’s because it’s continued to be updated and made relevant for people,” he said. While it will be hard for the company to succeed if the Coke brand is not doing well, “it won’t be sufficient to deliver the growth story that we all want. So we need to be able to do both. We need to be able to keep Coke relevant and vibrant across all its barriers, and yet still expand the portfolio.” 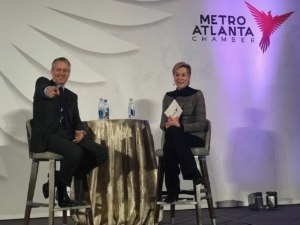 James Quincey, CEO of the Coca-Cola Co., in a conversation with Hala Moddelmog, CEO of the Metro Atlanta Chamber (Photo by Maria Saporta)

Quincey also is particularly focused on the company’s environmental strategy. The company already has met its goal to return all the water it uses back to the environment. It has a longer ways to go in the recycling of its plastic bottles.

“Here’s a resource that has intrinsic value. Why is it being wasted? Why is it going to the landfill or even worse, it gets into the ocean?” Quincey asked. “It’s a matter of collective will. The manufacturers, the retailers and the local governments are to put in place the schemes. There are a good number of places in the world where this is being successfully achieved.”

Coca-Cola announced its “World Without Waste” objective more than a year ago to make all its packaging recyclable. “We’re almost there,” he said. “But we need to make sure that by 2030, we’re getting a bottle or a can back for every one we sell.”

Over the years, Coca-Cola has been one of the top corporate citizens in Atlanta – something Quincey pledges to continue.

“The company has had a very intimate relationship with the city of Atlanta and the state of Georgia,” he said. “We will continue to support Atlanta in many ways. Our global foundation reached $1 billion dollars in giving over the last number of years. Almost $200 million of that went to Atlanta.”

Quincey currently is co-chairing the capital campaign for the Atlanta Police Foundation along with Atlanta Mayor Keisha Bottoms. He also serves on the Atlanta Committee for Progress, a high-level group of executives and civic leaders who serve as advisors for the mayor. The company also has numerous executives involved in civic initiatives.

“Yes, we’re doing it for community reasons, but also in the end, the company needs a vibrant city to be its base.” Quincey said. “If we want to employ thousands of people in a location, it’s certainly going to be a lot better and we’re going to get better, more motivated people if the place that they’re living in is attractive, [has] good public safety, good public education, good public infrastructure, good public policy, and there’s a community feel for the well-off and the not-so-well-off.”

When asked about particular city and state policies, Quincey said the company generally prefers to provide its views in private.

With the planned relocation of SunTrust Banks Inc.’s (NYSE” STI) headquarters to Charlotte, N.C., following its merger with BB&T Corp., there has been concern about Coca-Cola’s ability to remain an independent Atlanta-owned company.

Quincey said it all comes down to running a successful company.

“The better we do in the business, the easier it is to generate the funds to do all the other things we want to do,” he said. “A vibrant and successful company is good for everyone, whether it’s the shareholders, the employees, the city, the community…”

Quincey said the company had a good year in 2018, and it is headed for another strong year in 2019. Its net revenue, however, will be impacted by the foreign exchange rate.

“But fundamentally, the business continues to grow and expand and get healthier, and that’s what will take us into the future,” Quincey said.

When it comes to his work life, Quincey said he spends a good proportion of his time in Atlanta. But he also spends a great deal of time traveling internationally.

“This is a business that has less than a quarter of our profits come from the United States,” he said. “There’s a lot of leadership that needs to be done in Atlanta with the board, the stakeholders.”

Quincey, who is from Britain, became particularly passionate when asked about Brexit and the future of the United Kingdom’s relationship with Europe.

Given that Parliament has been unable to get a majority for any course of action, Quincey said it might be inevitable that there is second referendum on a path that would garner more than 50 percent of the vote. Quincey’s fear is that the country will remain polarized no matter the outcome.

“It’s a divided country,” Quincey said. “Reconciling it, bringing that back together in some direction, is going to be very difficult, and so I think it’s a symptom of a larger kind of geopolitical question that’s out there. I mean, the United Kingdom is not the only place where you’ve got a struggle over identity between essentially nationalists or independentists versus collectivism.”

Quincey said companies can play a role in providing places where their employees can share divergent ideas – giving each other a chance to listen and connect.

Quincey said that having “a greater degree of openness, but with some connectivity and empathy, is very important in this day and age.”

The company is not a passive bystander, he said. The company exists for its shareholders, but also its stakeholders.

“We have always seen that the company needs to generate wealth in the broadest sense for what stands for a wide number of stakeholders, including the community, and the values that we stand by,” Quincey said. “That’s an important North Star in how we will approach things.”