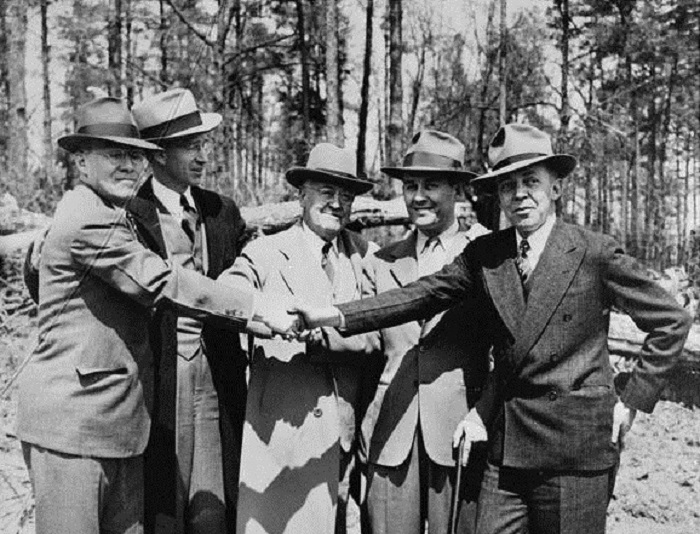 This week, guest columnist THOMAS A. SCOTT, professor emeritus of history at Kennesaw State University, tells the story of a business leader who paved the way for the significance of the Atlanta region’s business and industry sectors. 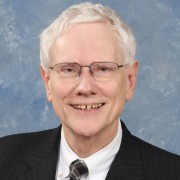 By Thomas A. Scott

It’s not fashionable today to praise the moderates of the World War II and postwar era. They didn’t demonstrate the courage or moral leadership of the heroes of the civil rights revolution. But they deserve credit for standing up to the Talmadges of Georgia politics and bringing about real economic and social change. One of those moderate leaders, James V. Carmichael, is largely forgotten today, but he once was as prominent as Robert Woodruff or Ivan Allen or any of the corporate/political leaders of the time. 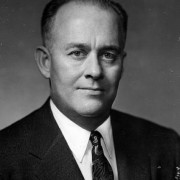 Politically, he is best remembered as a contender for the governorship in 1946, when he was the candidate of those wanting to continue the progressive reforms of Governor Ellis Arnall. In the Democratic primary, Carmichael tallied more than 313,000 ballots, running far ahead of the demagogical ex-governor Eugene Talmadge. Unfortunately, Carmichael lost the election because of a system then in place in Georgia (now unconstitutional) in which a candidate needed to win a plurality of county-unit votes. Each county received a certain number of county-unit votes based on a formula that favored sparsely populated rural counties over heavily populated urban counties. Talmadge won the majority of rural south Georgia counties and ended up with 242 county-unit votes to Carmichael’s 146.

Carmichael’s greatest accomplishment was in his role of general manager of the Bell Aircraft, or Bell Bomber, plant in Marietta during World War II. Company founder and president Larry Bell had learned to respect Carmichael’s talents, first as plant attorney, then as assistant general manager, and finally in 1944, as general manager. By that time Bell Bomber employed 28,000 workers, making it one of the largest corporations in the South. Carmichael demonstrated excellent business skills, showing an ability to put the right people in top management positions. Under his leadership the plant met its production goals, while maintaining an outstanding safety record. 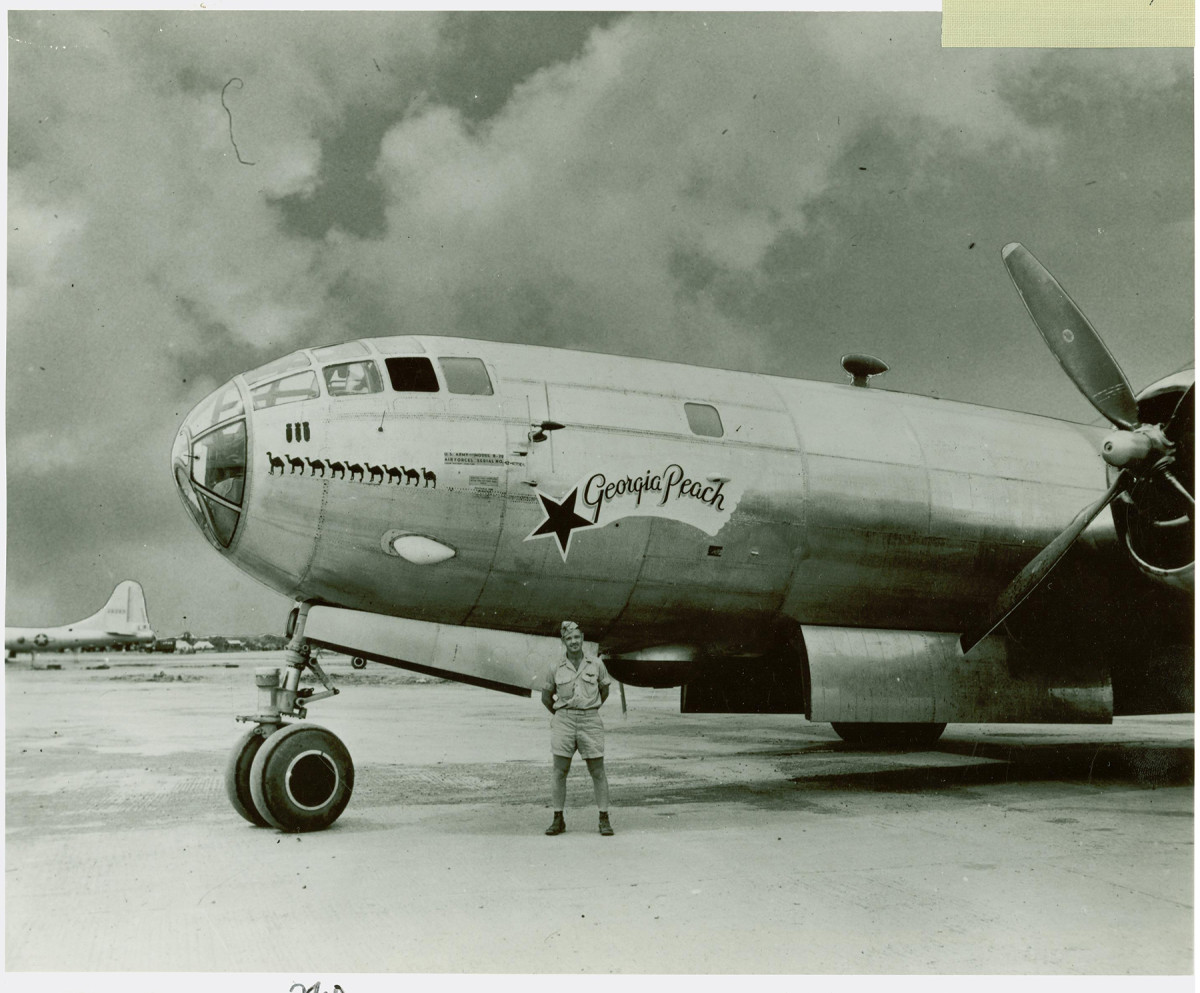 The “Georgia Peach,” a B-29 bomber built at Bell in Marietta, flown by Major Jack Millar over Japan. Photo: Kennesaw State University Archives

Born on October 2, 1910, Carmichael was in his early thirties when he ran Bell Bomber. More remarkable than his youth was the fact that he had overcome a major disability. As a teenager, an automobile struck him while he was dashing across the Dixie Highway near his parents’ store in the Log Cabin community. The car dragged him more than 100 yards, almost completely severing his spine. He spent his sixteenth birthday clinging to life in what today is Crawford Long Hospital and would suffer intense pain forever after. Eventually, he recovered enough to walk with the aid of crutches by shuffling his feet, but generally he got around in a wheelchair. Like Franklin Roosevelt, Carmichael inspires because he refused to let his disability hold him back.

After the Bell Bomber plant closed, Carmichael assumed the presidency of Scripto, Inc. Under his leadership the company expanded overseas and became the largest manufacturer of writing instruments in the world. In 1951 when the Air Force asked Lockheed to come to Marietta, the California giant persuaded Carmichael to take a leave of absence from Scripto to reopen the aircraft plant. His successor as general manager, Dan Haughton, gave Carmichael credit for conducting a successful B-29 modification program, planning for B-47 production, and preparing the way for the C-130 Hercules project. 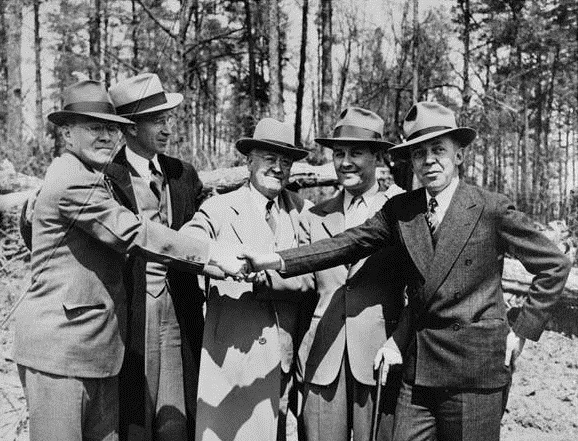 In 1952 Carmichael returned to the pen company but continued to serve on the Lockheed board of directors. For several years in the mid-1950s Robert Woodruff attempted to recruit him as his replacement at the helm of Coca-Cola. Regrettably, Carmichael declined, explaining that his ailing back prevented him from running such a large company any longer.

In addition to his business and political achievements, Carmichael is remembered for his extensive record of public service. He was the first head of the Atlanta Arts Alliance, a trustee of Emory University, and a member of the Board of Regents of the University System of Georgia. He died on November 28, 1972, at the still-young age of 62.

Carmichael’s 1950 commencement address at Emory University perhaps best articulates the progressive creed that governed his life. Sensing that the South had sometimes been its own worst enemy, he expressed disdain for those who clung to the Confederate past and failed to address the problems of the present. He argued that “too many of our people want to keep on living on who they are and where they came from.”

Instead, he suggested that the only criterion “of individual worth is what a person is doing and where he is going.” He viewed government as a potentially positive force in bringing economic development to an impoverished region. There were limits to his progressivism, but in the context of the times, he was on the side of those who championed reform and helped to build a more prosperous New Georgia.

Thomas A. Scott is professor emeritus of history at Kennesaw State University. He is the author of three books, including Cornerstones of Georgia History and Cobb County, Georgia, and the Origins of the Suburban South: A 20th-Century History.

Previous Article
Professionals in the Housing Industry Have Plenty to Be Thankful For
Next Article
By the shortest of straws, Democrats win the week in the South