This year is the first in-person celebration since the pandemic began in 2020. (Photo courtesy of JapanFest, Inc.)

Next weekend — Sept. 17 and 18 — marks the 35th anniversary of the annual JapanFest, one of the largest celebrations of Japanese culture in the Southeast. The two-day festival in Duluth will feature a wide range of activities, performances and food that highlights Japanese culture and lifestyle.

The weekend event is hosted at Gas South Convention Center at 6400 Sugarloaf Parkway, and the team expects to see around 20,000 visitors. The festivities are organized by JapanFest, Inc., the Japan-America Society of Georgia and the Japanese Chamber of Commerce of Georgia.

JapanFest was founded in 1981 as a series of events hosted by the Consulate-General of Japan in Atlanta. The festival became an annual event in 1996 and JapanFest, Inc. was designated as a nonprofit the following year. The event has continued to grow over the years and, before the pandemic, attracted around 26,000 attendees. 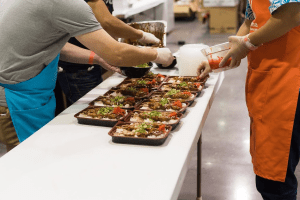 The freshly made Japanese food is a major draw for visitors. (Photo courtesy of JapanFest, Inc.)

The weekend’s lineup likely has something for everyone, whether you’re a foodie, anime fan or lover of the arts. Those looking to get involved in the action can check out activities like the MomoCon cosplay contest, the anime village and scavenger hunt.

“Georgia is big [into] anime and cosplay with things like MomoCon and DragonCon,” Event Manager Kazuko Lillie said. “I think people are looking for somewhere to wear their cosplay because you can’t go to the shopping mall dressed that way but you can come to JapanFest. Visitors enjoy that.” 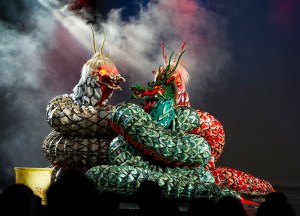 Folks wanting to sit back and enjoy the show can check out performances like the choreographed fight from Samurai Sword Soul, live readings from storyteller Motoko and the Iwami Kagura serpent performance that brings mythologies to life.

The freshly prepared food is also a big attraction, according to Lillie, with some favorites being sushi, ramen and Japanese pancakes called okonomiyaki.

This is the first in-person festival since the pandemic began in 2020. JapanFest was held virtually that year, and the subsequent festival was canceled two weeks before the event due to the Delta variant. The two-year hiatus has left the team and attendees alike anxiously anticipating this year’s event, which as of now, seems to be going according to plan.

In addition to having a good time, Lillie and the team hope that visitors use the festival as a chance to learn more about Japanese culture and try something new to them.

“Our mission is introducing our culture to the U.S. Some people think Japanese people still wear the kimono or are ninjas or samurai but it’s not that,” Lillie said. “[With the festival,] we can show little pieces of our culture. I think we can share the experience and I want [visitors] to think ‘I want to go to Japan one day.’ We hope everyone enjoys the Japanese performances, food and shopping this weekend.”

If you want to learn more about the 35th JapanFest or buy tickets, click here.