Jay Smith was at his desk, absorbing bad news about his father, when a boss defined his Moment 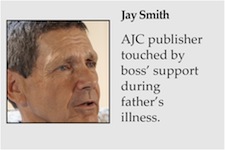 While Jay Smith, retired president of Cox Newspapers, Inc., was in his early twenties working as a reporter for the Dayton (Ohio) Daily News, he drove 50 miles south to his hometown of Cincinnati one weekend to visit his family. His trip home took a turn for the worse when he heard the devastating news that his father had been diagnosed with terminal malignant lung cancer.

The following Monday, Jay sat alone at his desk at the newspaper office back in Dayton when suddenly he felt the presence of someone standing behind him. That presence unexpectedly belonged to Chuck Glover, the paper’s general manager. Jay’s wife, Susan, who also happened to work in sales at the paper, had informed Chuck of her father-in-law’s health condition.

“In his own very quiet, very sincere way, Chuck leaned over and said to me: ‘Jay, whatever you need to do, take care of it. Your job will be here,’” Jay recalled in our accompanying HD Moments video.

Chuck took time out of his busy schedule to show Jay compassion and let him know that despite the troubles that would come along with his father’s illness and cause a disruption in his work, Jay would always have a stable position at the paper. Consequently, Jay was able to properly take care of his father during his last years of life battling lung cancer without missing a deadline – all the while knowing he had a job and a supportive, caring boss.

At that Moment Chuck made a lasting impression on Jay and left him with two important lessons that he carried far into his roles in the newspaper business. First, he learned that rank and status are not the most important things to gain in a career.
“It taught me that while money and title matter, what matters more than anything else in the workplace is someone who knows you, someone who cares about you, someone who is really willing to put himself out there on your behalf,” Jay said.

Jay, who earned a bachelor’s degree from Ohio State University and a master’s degree from the University of Dayton, also vowed to treat co-workers in the same fashion as Chuck, should he ever find one of them in a comparable situation. “The second lesson I learned was that if the opportunity ever presented itself, and it did, I needed to behave in precisely the same way toward my colleagues,” he said.

“I was fortunate to have other offers from other newspaper companies and I don’t think I entertained a single one of them for more than 30 seconds,” Jay recalled. “I felt this loyalty to Chuck. More particularly I felt it to Cox and the newspapers it ran. And that was a product of what Chuck did that kept me with one company for 37 years, and left me feeling really good about that company.”

Jay started in the newspaper business at age 17 at the Cincinnati Post and Times-Star. He joined Cox as a reporter in Dayton and eventually worked his way up to retire as president of Cox Newspapers in 2008. In between those roles, he served as the publisher for the Dayton Daily News, the Austin American-Statesman and also as publisher for six years of the Atlanta Journal-Constitution. He also was chair of the Newspaper Association of America and served on the board of the Associated Press.

Long active with the Northside Youth Organization as a baseball coach, Jay now writes a column titled “Dugout Doings” for the youth sports club and is also vice chair of the Chastain Park Conservancy, for which he is leading a fundraiser to build a new playground in the park.

Looking back over his career, Jay continually returns to that one Moment in the Dayton newsroom.

“It’s a lesson, a Moment, that will be ingrained in me forever,” Jay said.