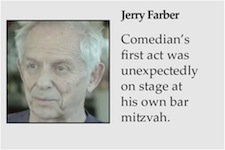 Most people wouldn’t subject themselves to ridicule on their birthday – but then again, Jerry Farber and other professional comedians aren’t like most people. The veteran Atlanta entertainer and nightclub owner will celebrate his 75th birthday and career as a comedian with a traditional comic roast this Saturday night, March 2 at his Buckhead club.

Had it not been for Jerry’s Moment 62 years ago – when a terrible band and even more terrible comedian were losing the attention of 300 guests at his own bar mitzvah – Jerry may never have become “Atlanta’s Stud Muffin of Mirth” and “The Cowboy of Comedy.”

Jerry was 13 years old and enjoying his celebration at a country club in his hometown of Greensboro, North Carolina, when the 300 guests began to grumble about the entertainment. “Turned out to be great food, a terrible band, and an even worse comedian,” Jerry remembered in our accompanying two-minute Moments video.

Jerry’s mother, remembering watching her son deliver jokes to his toys when he was younger, grabbed him during the party and implored him to take control of the stage that night. She shoved Jerry up to the microphone, urging him to thank his guests and hosts and perhaps tell a few jokes.

Looking out over the bored crowd, he suddenly saw his uncle who had flown in from Miami for the bar mitzvah and told a Henny Youngman joke he adapted for the occasion.

“My uncle flew up from Miami,” Jerry started. “He told the airline baggage desk: ‘I want this piece of luggage to go to Greensboro, North Carolina, this to go to Baltimore, and this to go to L.A.’ And the woman at Eastern Airlines at the time said, ‘No, we can’t do that.’ And my uncle Bernie said, ‘Why? You did it twice last week.’ ”

The crowd erupted in laughter. It was a feeling of elation Jerry had never felt before.

“I acted nervous but I wasn’t,” Jerry said. “I was more comfortable on stage than off stage.”

Jerry performed for 20 minutes, amusing his party guests as if they were a crowd that had come just to see his comedy set. Many performers will report that they are more comfortable on stage – under the lights and in front of the crowd – than they are in small conversational and casual encounters. Jerry discovered that was how it was for him. At that Moment, he knew he had found something he loved to do.

“I loved the sound of laugher – particularly adult laughter,” he said. “And they laughed.”

Jerry’s career didn’t take off as a comedian after his performance at his bar mitzvah, but he would refer back to that Moment in the future.

“It was the most lucid Moment I had,” he said. “Most children weren’t thinking about what they were going to do – but I knew then.”

A year or two after graduating from the University of North Carolina in Chapel Hill and working in his father’s business, Jerry became serious about pursuing his career as a comedian. This time, however, his parents were not amused.

“They really resisted,” he said. “They said, ‘Oh no, Jerry, that was your bar mitzvah then, everybody loved you then. You think you’re going to do this? No, Danny Kaye can do it, Milton Berle can do it – but you’re not them.’”

But Jerry believed in the power of laughter and he had a desire to contribute to the world in a way that only laughter could contribute.

“I forget who said it, but they talked about how laughter is what separates humans from all the other wonderful life forms,” he said. “I truly believe that if somehow we could put it (comedy) in the air all over the world, at 8:30 all over the world, and people could laugh because it is such an engaging way to share with strangers … it would save the world.”

At 75, Jerry may not be able to distribute laughter quite on that worldwide scale, but he has made it his work at a succession of nightclubs in Atlanta and around the country in whichever room he enters.

In 2011, he opened Jerry Farber’s Side Door adjacent to the Landmark Diner on Roswell, Powers Ferry and Habersham roads – years after his days of owning a club by the same name on Pharr Road in the 1980s. The club at the Landmark Diner has enveloped a persona much like Jerry’s first club as it provides a venue for young comedians and musicians alike to perform for a crowd. Jerry serves as emcee.

The club isn’t just a venue for performers, it’s also a venue that provides an experience for the crowd that gathers together, Jerry says. “People that look like they have been quite honestly frozen when they walk in will erupt in laughter and it’s rewarding,” he said.

Jerry Farber’s 75th birthday roast this coming Saturday will be rewarding not only for the local charities the proceeds will benefit, but also for the healthy benefits of laughter – even at his expense.

“I find quite often – and I’m humbled, when people laugh – it’s rewarding.” Recalling his bar mitzvah 62 years ago, Jerry says that is still “my most lucid Moment. I knew then, performing, seeing strangers, the coalescence, was beautiful – and still is.”

There are a few seats left to Saturday’s benefit at Jerry Farber’s Side Door. A second show on March 9 is also planned. If you would like to attend, please call 404.414.6667. 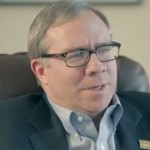 Next week in Moments: Raymond King

Next week in Moments: Raymond King, President and CEO of ZooAtlanta, on the Moment a doctor’s diagnosis prompted a career change.