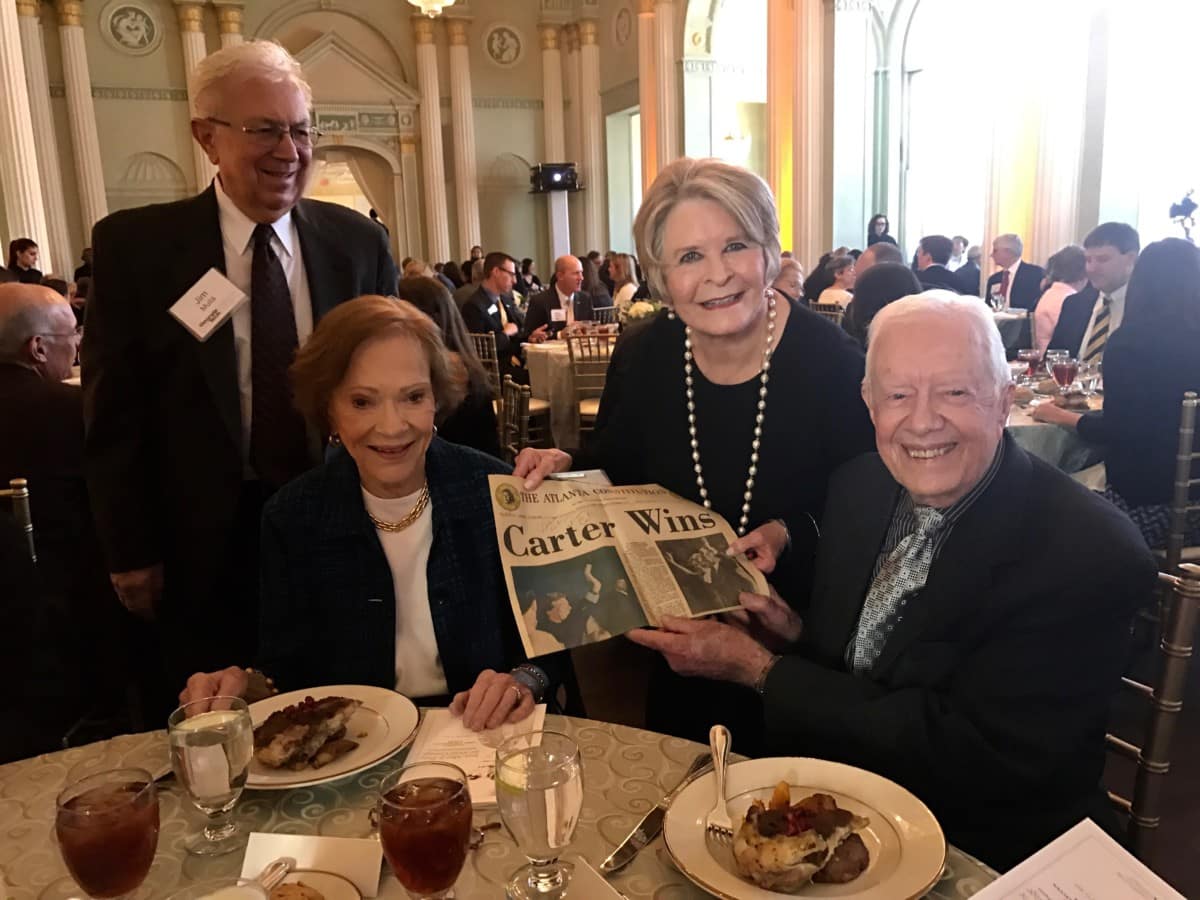 It was the first time in its five–year history that the Allen Prize has been given to a couple rather than an individual. 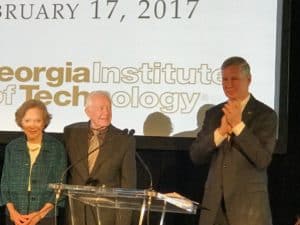 For former President Jimmy Carter, the award luncheon at the Atlanta Biltmore was like coming home.

Carter attended his sophomore year at Georgia Tech before entering the Naval Academy. He returned to give a commencement address, when he was awarded an honorary doctorate’s degree, Carter said, explaining that usually they are not given to former Tech students – unless they had been president.

“It is a pleasure to be associated in any way with Ivan Allen Jr.,” Carter said upon receiving the award. “His son (Ivan Allen III) helped start the Carter Center.”

Then Carter got personal – remembering when he and Rosalynn were married in 1946.
“The first night that Rosalynn and I spent together was here at the Biltmore,” Carter said. “That was 70-and-a-half years ago. The next day we had a head-on collision.” 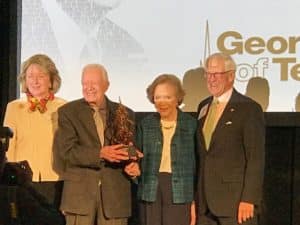 Tricia Allen, Jimmy and Rosalynn Carter and Inman Allen pose for a picture after the luncheon (Photo by Maria Saporta)

Carter said he was recently asked why Georgia had ended up being more accepting of integration during the 1960s than its neighboring Southern states.

He credited the spirit of Ivan Allen Jr. and newspaper columnists Ralph McGill and Gene Patterson. “It was mandatory that the rest of the state go along with them,” Carter said, adding that he always had a great admiration of the former Atlanta mayor and his family.

“We had one more thing in common,” he said. “We both ran against (segregationist) Lester Maddox – when I was running for governor and when Ivan was running for mayor,” Carter said. “In every respect, my heart is with Georgia Tech and with Ivan Allen. This award has a special meaning for me.”

Rosalynn Carter also paid tribute to Ivan Allen upon accepting the prize. She said she admired Allen from afar when she was living in south Georgia in the early days of the civil rights.

“Ivan Allen was a beacon of light for Jimmy and me, and for so much of the country,” Rosalynn Carter said, adding that he provided a moral compass for Atlanta and Georgia. 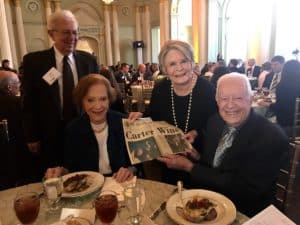 Jim and Linda Mullå show Rosalynn and Jimmy Carter the front page of the Atlanta Constitution from Nov. 3, 1976 with the headline: “Carter Wins” (Photo by Maria Saporta)

A special moment during Friday’s lunch was when Linda Mullå, Ivan Allen’s executive assistant from the days he was mayor and later when he returned to run the Ivan Allen Companies, brought out the front page of the Atlanta Constitution of Nov. 3, 1976.

Linda Mulla was able to get the former president to autograph the newspaper.

Another connection between the Carters and the Allens is Tricia Allen, the wife of Inman Allen, the former mayor’s second oldest son.

“She was my first employee,” Carter gladly stated when they all posed to get their picture taken.

The Ivan Allen Jr. Prize was made possible by a $2 million endowment from the Hilda and Wilbur Glenn Family Foundation. The prize recognizes people who have demonstrated leadership to improve the human condition despite personal risks and challenges. Prize winners receive $100,000 with their award.

It just so happened that Carters received the prize on the 70th birthday of Thomas K. Glenn II, president of the Glenn Foundation and the inspiration behind establishing the prize.