John Portman donates $2.5 million to Georgia Tech; agrees reluctantly to have dean’s chair named after him

Atlanta architect John Portman has always had a soft spot in his heart for Georgia Tech — the institution where he received his architectural degree in 1950.

Going back several years, Portman let it be known that he would be interested in supporting Georgia Tech’s College of Architecture in a significant way financially.

What about supporting a chair for the dean of the College of Architecture, Georgia Tech officials proposed.

Portman agreed, but he did not really want any recognition for his $2.5 million gift, according to Mickey Steinberg, a senior advisor and long-time colleague of John Portman. 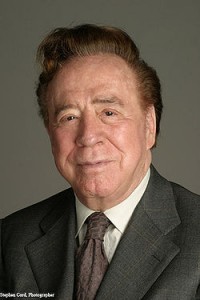 But college officials and Steinberg finally convinced Portman that the dean’s chair should be named after him — for the good of the school. Steinberg said that having Portman’s name on the dean’s chair would give the institution added credibility given that he is one of the most notable, if not the most famous alumnus, of Georgia Tech’s College of Architecture,

“He was reluctant to let them do that  but they finally convinced him,” Steinberg said Monday. “His first goal was to strengthen the school.”

Georgia Tech has just announced a $2.5 million gift to endow the dean’s chair and name it in John Portman’s honor. According to the university, the chair will enhance the college’s ability to attract and retain the very best academic leaders. By the way, Portman received an honorary doctorate degree from the college in 2012.

“Atlanta is my town,” Portman said in a release. “Georgia Tech is a jewel in Atlanta’s crown, and the College of Architecture played a pivotal role in the shaping of my life. I am honored to partner with the institution that means so much to me, while it aims to ensure generations of aspiring architects have a world-class educational foundation on which to build their dreams, contribute to the field, and improve the lives of people everywhere.”

Dean Steven P. French will be the first to hold the chair.

“The Portman Dean’s Chair is transformative,” French said in the release. “It is absolutely indispensable to reaching our strategic goals, but it also serves as an inspirational legacy to generations of architects in the Georgia Tech community.”

French, a professor of city and regional planning, served as associate dean for research within the College from 2009 to 2013.

Both he and his predecessor, Alan Balfour, whose five-year tenure was marked by innovation and leadership in implementing structural changes, have been committed to connecting with alumni and enlisting their support in advancing the College of Architecture.

“John is very devoted to Georgia Tech,” Steinberg said. “Georgia Tech is really where he got his start.”

Portman also has created and financially supported the Portman Prize for Architecture — a cash award given to a student whose work has been reviewed by top professionals and awarded the top prize in the competition.

John Portman is chairman of the Portman Companies – affiliated architecture, development, financing and management companies – all headquartered in Atlanta.  Since the founding of his firm in 1953, he has been a pioneer in architecture, introducing the very concept of the architect as developer. Over the course of more than 60 years, The Portman Companies have developed and/or designed more than 50 million square feet of space globally, spanning the segments of mixed-use, hospitality, office, residential, exhibition and higher education.

Portman’s impact has been felt around the world, but no city benefited more from his vision than Atlanta, whose downtown he revolutionized over a span of 50 years, beginning in the 1960s. The 14-block Peachtree Center complex features many of his landmark projects, including the Atlanta Merchandise Mart (now AmericasMart, the world’s largest single wholesale marketplace), the Atlanta Marriott Marquis, The Westin Peachtree Plaza, and the Hyatt Regency Atlanta, with its “first-of-its-kind” 22-story atrium. From the opening of that groundbreaking hotel in 1967, he made architectural history and won international acclaim.

He received the Exceptional Achievement Award from Georgia Tech in 1986 and an honorary Ph.D. in 2012. In addition, he has been recognized throughout his career with prestigious industry awards such as a lifetime achievement award from the Council on Tall Buildings and Urban Habitat in 2009, the Silver Medal Award in 1981 from the Atlanta Chapter of the American Institute of Architects (AIA) for innovative design, and an AIA Medal in 1978 from the national AIA organization for innovations in hotel design.

John Portman helped shape the second half of the 20th century as an artist, an architect, a developer, and an entrepreneur. Notable projects outside of his home town of Atlanta include Embarcadero Center in San Francisco, Shanghai Center and Tomorrow Square in Shanghai, and Yintai Centre in Beijing.  He once famously said, “To create space that enhances the quality of life is architecture’s greatest gift to the community it serves.”  He now will have a positive influence on the contributions of generations of young architects to come.

By the way, one of John Portman’s professors at Georgia Tech, was my father, Ike Saporta. Portman called him — Ike “Why” Saporta, because Papa was always asking “Why?”