Portman, overcome with emotion several time during his acceptance talk, spoke about how his family has always been there for him — “especially Jan, my wife of 69 years.”

After thanking his professional family and friends, he thanked every one for showing up at the dinner, attended by nearly 1,000 people.

“It’s a most humbling experience to be honored in  one’s own back yard,” said Portman, who has reached international acclaim as an architect, developer, painter, sculptor and Renaissance man. “People who know me would gulp for me to say humbling, especially here at the Hyatt, which was the first hotel I designed. We didn’t know any better.” 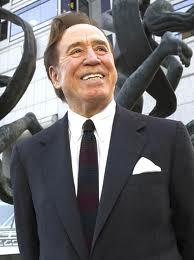 Portman, who will turn 89 on Dec. 4, continues to work on all cylinders on his architectural, development and creative projects.

“I hope to God I’ve got a few extra chapters to write,” Portman said.

During his acceptance talk, Portman spoke of his love of Atlanta, his concern about the impact technology is having on our lives and his philosophy of life.

When he began his transformation of downtown Atlanta in the early 1960s — that now extends over 17 blocks along the Peachtree ridge and stretching from the Downtown Connector on the east to Centennial Olympic Park on the west — Portman said the goal was “to take Atlanta to a new dimension.”

But for him, it was always about people.

“We think a lot about technology, which is really dividing us, not bring us together, but isolating us. It concerns me,” said Portman about people who constantly are looking down at that their phones rather than interacting with each other. “We want to be at the cutting edge. It’s only a tool. Technology is here to serve us rather than for us to serve it. We are relating by email. Aren’t we missing an awful lot as human beings?”

By holding the dinner at the Hyatt was especially fitting. Portman was so determined to build a hotel with an indoor atrium that he wouldn’t take no for an answer. Hotel brands turned him down. Lenders turned him down. But finally a family with a motel chain in Chicago — the Pritzkers — took a chance, and the Hyatt brand,  the trend-setting Portman design and Atlanta took off.

“This hotel was a personal historic moment for us,” Portman said. “It was not just another development. It was a game changer — born out of Atlanta’s aspiration to become a world-class, international city. It was, and still is, a modern icon. It was more than just an icon. It was a human space and experience — it would enhance life by caressing the human heart by making it indigenous to Atlanta.”

He recalled the grand-opening of the Hyatt in 1967, when the hotel was embraced by the world and brought international recognition to Atlanta.

Portman grew up three blocks from the Hyatt during the 1920s and 1930s, remembering the suffering of the Great Depression, a memory he has carried with him throughout his life. He never would have imagined that one day he would be honored in this way in Atlanta.

“This is my town. It always will be,” Portman said. “There’s a special spirit that resides in the heart that also beats in my heart — the heart of Atlanta. I have been blessed to be able to play in the world’s greatest sandbox — Atlanta.”

As customary for the Four Pillar tributes, honored friends and associates talk about the honorees four traits — quality, responsibility, vision and integrity.

Professor Mohsen Mosstafavi, dean of the Harvard Graduate School of Design, spoke about the impact Portman has had on the profession internationally.

City Council President Ceasar Mitchell spoke about a chance encounter he had with Portman 20 years ago when he had to serve a two-inch thick legal summons at the architect’s home at dusk expecting to be chased by dogs or worse. Instead Portman could not have been nicer to the total stranger, an act of kindness that has stayed with Mitchell forever.

Longtime friend Charlie Loudermilk Sr. talked about how they have lunch together nearly every week. “We think we solve a lot of problems, but nobody is listening to us,” said Loudermilk, who received the Four Pillar Award two years ago. “We’re too old.”

And then another one of Portman’s dear friends, former Atlanta Mayor Andrew Young, spoke of how the idea of the hotel atrium came to be.

Before the Hyatt was built, Portman actually designed a senior citizens home with an indoor atrium — the Antoine Graves Senior Housing High Rise — so that when older people had to give up their homes with porches, they could create a porch-like environment with an indoor atrium. The high rise was torn down in 2010.

As Young said, for Portman, it was always about the human experience. Going to Portman’s home is always an obstacle course for Young because he’s scare he’s going to fall into some pool of water. “He’s trying to take the whole world and bring it inside,” Young said.

For Young, the elevators in the Hyatt Regency lobby resembled a symbolic “stairway to heaven,” Young said. “You see a work of art — a man who believed he could make something out of nothing.”

Previous Article
Proud day for future pipefitter: She was graduated and hugged her son
Next Article
Atlanta Partners for Education Project for a Day … Making A Difference