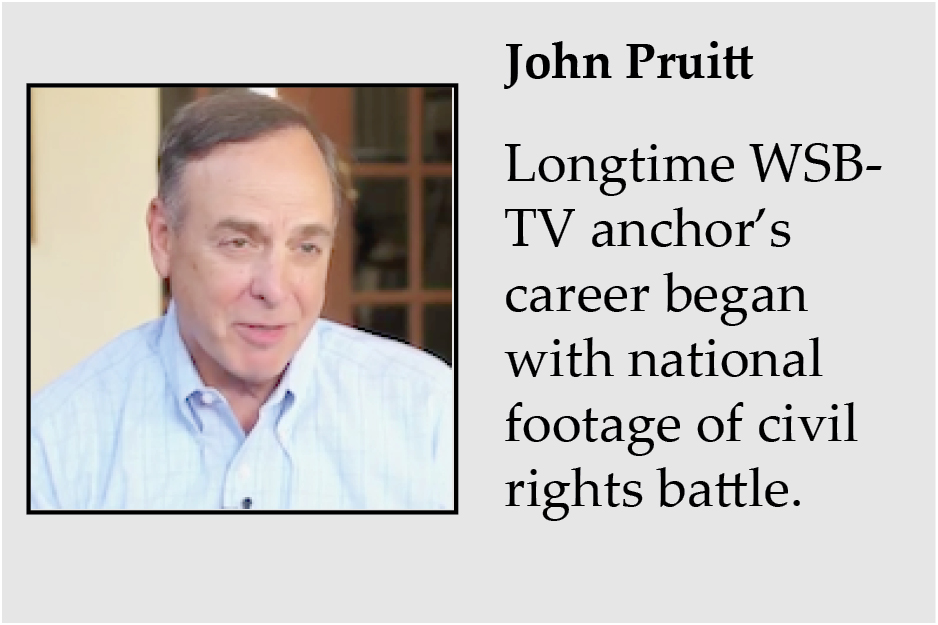 As a longtime news anchor on Atlanta’s top-rated television stations, John Pruitt narrated and often embodied the tumultuous events that punctuated our last half-century. Renowned for his calming voice and steady delivery, his journalistic career was sparked amidst the fire of the overarching battle of our region.

Two days after President Lyndon Johnson signed the 1964 Civil Rights Act into law, a 22-year-old John Pruitt reported for duty on a holiday Saturday, finishing up his first week as a brand new “flunky” at WSB-TV in Atlanta. Working on July 4, John was assigned to carry video equipment to help cover a segregationist rally at Lakewood high school stadium where Mississippi Gov. Ross Barnett would fire up a hot-blooded crowd in the middle of a sad summer of Southern dissent.

Thirteen days earlier, three civil rights volunteers working in Mississippi to help register voters were kidnapped, killed and buried in an earthen dam. Their bodies would be found on August 4. Two days later, on July 6, John Lewis would lead 50 blacks to attempt to register to vote in Selma, Alabama. Instead they were arrested.

So on this hot summer day in Atlanta as John stood next to his colleague, Dave Riggs, who had just set up the unwieldy camera equipment to record the governor’s remarks, four young African-American men wandered into the rally, sparking an outbreak of violence in the stands. Dave handed his portable camera to John, quickly showed him how to press the button to record on film and pushed him in the direction of the battle and into his own Moment of journalistic fate.

Fearing he was witnessing a murder, John aimed the camera toward the middle of the brawl and captured the very first video footage he ever recorded in his young life. He captured vivid images of the four young men being beaten with fists and folding metal chairs. Trying to calm the crowd, the governor started singing the Star-Spangled Banner, providing an ironic soundtrack to the skirmish:

Oh, say does that star-spangled banner yet wave,
O’er the land of the free and the home of the brave.

Soon police pushed away the attackers and pulled the four men to safety. Fortunately, they recovered from their injuries and no one died.

Meanwhile, John and Dave hurried back to the station and turned in John’s film. After the footage was developed in the darkroom, it was selected to appear on that evening’s NBC national newscast, marring the country’s celebration of freedom with unsettling footage of its continued denial to many of our citizens.

“I realized that, as appalled and horrified as I was by watching this scene of violence, I was also exhilarated by the fact that my camera, with me operating it, had been the instrument of bringing the scenes of this horror to people around the nation and the world,” John said in our Moments interview. “And it was scenes such as this as we all know that hastened the civil rights movement in the South, pricking the conscious of so many people to change the existing situation. At the end of the day, I knew I found a career I could love and I’ve never looked back.”

A few weeks before the fight, the recent Davidson College graduate had returned to his hometown looking for a job. Having been yearbook sports editor at Druid Hills High School and a writer on his college paper, John stopped by the AJC to see if he could land a job in newspapers, but there were no openings. His interviewer suggested he apply at WSB-TV. John was hired to run errands for the newsroom, but when his first week’s work aired on the national news, his path for success was set.

He interrupted his reporting career to serve two years in the U.S. Army at Fort Gordon and in South Korea. He spent 13 years at WSB, then 16 years at WXIA-TV before returning to the market’s top station in 1994. He served as news anchor for a total of 43 years, winning 12 Emmy Awards, including Best Male Anchor and Best Documentary.

As we set up our video equipment in his home recently to record his Moment, John feigned surprise: “What … No teleprompter? No make-up?” He was surrounded by shelves of history books he now has more time to read as well as photos of his wife Andrea and their two married daughters – one of whom worked for a while as a TV producer. John’s familiar voice was rich and soothing – same as it ever was. He still appears on WSB, hosting and reporting for “Georgia’s Hidden Treasures,” an occasional profile of lesser-known travel destinations, as well as providing occasional political analysis.

During his 46-year career, John reported on so many memorable events (Martin Luther King Jr.‘s funeral, Jimmy Carter’s elections as governor and president and the Atlanta’s Centennial Olympics to name just a few) that his retirement in December 2010 – and this coming July’s retirement of his longtime partner Monica Kaufman Pearson – will diminish much-needed institutional knowledge and professional grace from Atlanta’s airwaves.

Next week in Moments: A humorous Moment with advertising and environmental website guru Joel Babbit.