One connection, 20 years, 30 million tons of food for the hungry.

John Smoltz couldn’t remember the full name of the guy he met on a golf practice range in the early 1990s, who set him on a course to help Atlanta feed its hungry.

“Scott, and I don’t remember his last name!” he said, looking down with a scowl you might remember not so long ago when Smoltz was on the mound for the Atlanta Braves. “I do know it was almost like, weird, because I didn’t know him that well and I had so many of these causes thrown at me. I didn’t have anything like cancer that affected my family, and I wanted to get behind something that would make a great difference.”

Today, Atlantans connect Smoltz with great pitching – the Baseball Hall of Fame seems a sure bet – and his support of the Atlanta Community Food Bank. It’s doubtful that any professional athlete in any team sport has done so much for so long for a local charity. Smoltz volunteered early in a career that kept him almost 20 years in the same city. His celebrity and connections helped boost the food bank’s distribution stats to 30 million tons of food each year through 38 counties.

The last name that Smoltz forgot turned out to belong to a powerful story, of a connection made in two sports besides baseball. Two men, who had first met 800 miles north of Atlanta, happened to cross paths in Gwinnett County. Readers of the bestseller “The Tipping Point,” will recognize this story as a prime example of how an idea can infect people like a virus, if that idea is carried by highly-connected people.

The power of the right introduction at the right time is a critical business lesson, in sports and in life.

“Scott Malaney was on the Atlanta’s Table Advisory Board in its early years,” Johnson said, referring to 1990 – 1994.

“Atlanta’s Table is our project that was launched in 1987 to collect and distribute excess prepared and perishable foods from the hospitality and food service industry. At the time, Scott was the chief administrator at Northside Hospital…. which became one of our first hospitals to donate excess food from their cafeteria and main kitchen area on a weekly basis. We haven’t been in touch since he left town to serve another hospital somewhere out of state.”

Ah, but Google has been in touch with Scott Malaney, who called a few hours after my email regarding Smoltz.

“John’s from Lansing, and I’m a Michigan State Spartan,” Malaney said. “In high school, he was as well-known as a basketball player as a baseball player. It was the same time that Earvin ‘Magic’ Johnson was coming up, along with other great players.”

For fun, Malaney and a friend (Tim McClelland, now a major league umpire) refereed high school games – and called fouls on Smoltz, for one. The memory of Smoltz stuck with Malaney because his mind is a Rolodex of interconnecting faces.

After playing for the Michigan State golf team and graduating, Malaney went into hospital administration. While serving as Northside’s chief operating officer for six years, he kept his scratch golf game going at St. Ives Country Club in Duluth.

“All kinds of athletes played there – Tony Casillas, Steve Bartkowski, Billy Joe Tolliver of the Falcons, their coach June Jones. The course was their sanctuary off the field,” Malaney said. “If you were ready to play, they’d take you along as just another guy playing golf.

“When I saw John show up on the range, I remembered refereeing his high school basketball game and told him that. He said his kids had been born at Northside. So we went out to play together too.”

The year was 1991. Smoltz was a youngster on a Braves team climbing in their division from worst to first. At Northside, Malaney was also trying to turn things around. 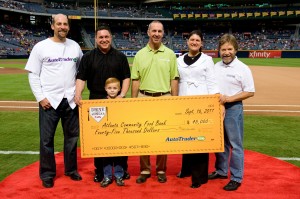 Pitching legend John Smoltz, with representatives from AutoTrader.com and Georgia Best Chevy dealerships present a check in the amount of $45,000 to the Atlanta Community Food Bank (ACFB). These funds were raised as part of the ‘Drive Away Hunger’ campaign, which also collected more than 16,000 pounds of food over the past four weeks for community members in need. (Special)

“Food is such a big deal at a hospital, because you have to feed three distinct populations,” he said. “If you have 450 beds, you’ve got about 300 patient meals, and 2000 more meals for employees and visitors. It’s a lot of food, and sometimes there’s just too much.

“I thought it was crazy to throw good food out, even though the state regulates that you can’t save it. It never occurred to me, until the food bank, that you can give it away.”

Just before the All Star break that July, Malaney met with the head of Atlanta’s Table in a very bleak area of Atlanta. They needed a public figure to raise awareness of the need for food.

While many organizations were asking him for help, the thought of people going hungry had been haunting Smoltz. As a Detroit Tigers draft pick, he had volunteered for a food bank telethon in Michigan. He called it a “light bulb moment.”

“That was the first time I was aware that this was going on, and I couldn’t believe people around me were going hungry,” he said.

“That was back when I was a wild young right-hander. Now 20 years later, I’ve gone to galas for the food bank, I’ve helped by cooking for 2,000 people… I mean, how easy is it for me to say something about this, and let my celebrity add value to a cause where there’s still so much need?”

Like Malaney, Smoltz valued efficiency – both as a pitcher and a charity pitch man. He liked how the food bank could turn a dollar into $7 worth of food and grocery services for the community.

Smoltz’s promotions changed with his role on the Braves, from “Strike Out Hunger” (donating his cash for every strikeout) to “Close Out Hunger.” 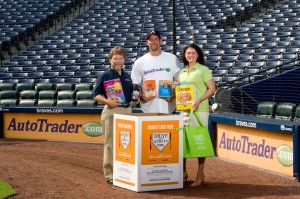 He just helped AutoTrader.com unveil “Drive Away Hunger,” where fans who test-drive Chevrolets and bring cans of food to Chevy dealerships earn free Braves tickets and enter a sweepstakes. To inspire cash donations, Smoltz is offering a $20,000 matching grant this month.

Meanwhile, Malaney had moved on to run hospitals in the Midwest and is now president and CEO of the Blanchard Valley Health System in Findlay, Ohio. He tracked Smoltz’ baseball career from afar, unaware of how much his recruit was doing for the food bank.

“I just remember John telling me he wanted to do something that would make a difference, that wouldn’t have anything necessarily to do with sports,” Malaney said. “He has a heart for something besides himself. For me, that was the obvious connection between him and what the food bank needed. Sometimes you connect a person with an organization, and that seed really grows. I’m pleased it has.”

In 2000 came the publication of Malcolm Gladwell’s “The Tipping Point: How Little Things Can Make a Big Difference.” Malaney recognized himself as a “connector,” the book’s term for people who operate as the hub of a human network, who collected friends way before Facebook started.

“For people who aren’t like this, connecting can be embarrassing and suck them dry,” Malaney said. “People like me get a real charge out of it.”

Likewise, Smoltz connects the hunger message to his fans. Now that he’s 44, retired and in the broadcast booth, he’s intent on coaching for the hunger cause.

“People assume that hunger is taken care of, and that’s the danger – treating it lightly,” he said. “This is a constant effort to say, ‘Instead of letting those cans on your shelf go to waste, give them to a place that can maximize their use.’ People need that reminder and motivation. “

Smoltz’s PR engine has helped the food bank respond to the growing hunger issue in Atlanta, a need fed by the dismal economy. Each week, nearly 60,000 people receive emergency food.

Just in the last year, the tonnage of food distributed has increased 34 percent – representing a total increase of 62 percent from two years ago, said food bank spokesperson Angie Clawson.

Yes, there’s been an increase in government commodities – a source that is expected to shrink – but no food is warehoused for more than six weeks. People need basic sustenance now more than ever, and they need more than what’s available.

In the impoverished areas around Turner Field, “It’s worse now,” said Chad Hale, executive director and founder of the Georgia Avenue Community Ministry. He runs five food networks, each with 50 families who split 25 tons of food each year. Another 100 families are on a waiting list.

Perhaps one of Smoltz’s fans will step up to fill that need. Needs get met through connections, after all.

Once upon a time, a young ballplayer needed someone to help, and from one simple introduction, look at the strong ripples that keep on coming.