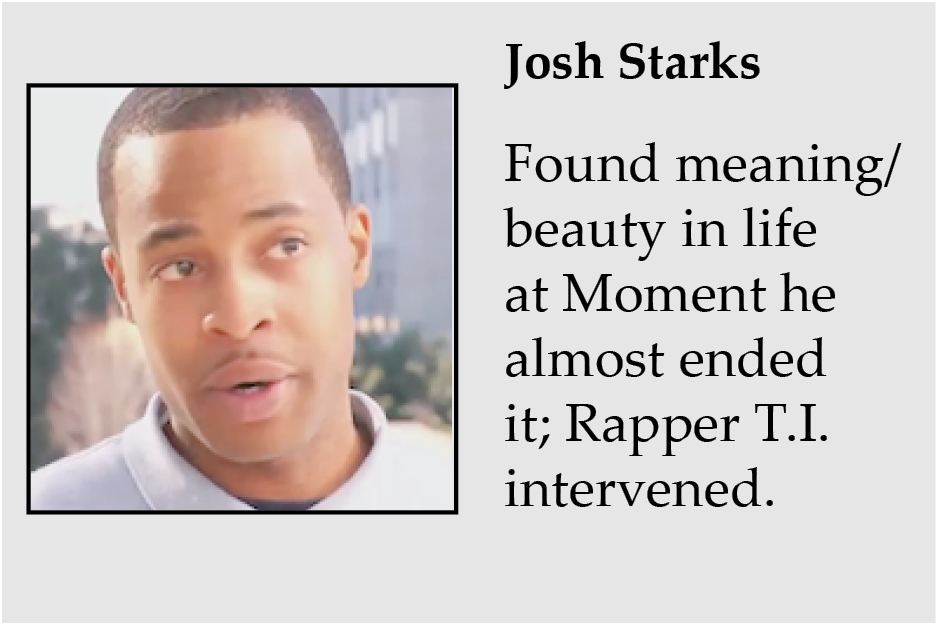 The economic downturn has been tough on millions of Americans and 24-year-old Atlantan Josh Starks was just one of the recession’s many casualties. By the afternoon of October 13, 2010, Josh said he had “pretty much lost everything that I worked hard for in life. You name it I lost it, or had to get rid of it to pay a bill or because I couldn’t find any work.”

When he woke up that Wednesday morning, Josh didn’t plan on that being his last day on the planet and he certainly didn’t plan to be on that night’s TV news, eventually attracting headlines around the world. All he knew as that day developed was that he had hit “a breaking point.” His car repossessed, Josh started walking to Midtown Atlanta, where he found himself standing along the edge of the roof of a Colony Square office building, looking 22 stories down on the corner of Peachtree and 15th streets.

As he lifted his gaze from the traffic, he looked east towards Stone Mountain and his perspective – literally and figuratively – began to change. “That kind of made me pause,” he said. With the sun warming his face, he began to look out at “God’s Creation … you see all the trees, you see the sky, it was a sunny day.”

After reflecting on Mother Nature, Josh’s thoughts next turned to his own mother. “Do I really want to do this to her?,” he recounted later. “She’ll be devastated if her only son and youngest child killed himself.”

As he hosted this internal debate, a man going up to work on the roof opened a door and spotted Josh on the wall and asked him what he was doing there. Employees in other Midtown office buildings who had called police to the scene, gathered on street corners while officers re-routed MARTA buses and the early stages of rush hour traffic.

Ryan Cameron, an Emmy-award-winning afternoon radio host on V-103-FM, was broadcasting his show live 15 floors below in the same Colony Square building that was becoming the center of this unfolding drama. Having lost a close friend recently, Ryan grew concerned and broke the story on the air of one of Atlanta’s top stations, whose format is a blend of R&B, soul and hip-hop.

Miles away, Atlanta music rapper Clifford Harris, better know by his stage name “T.I.,” was driving from his home to a video shoot when he heard Ryan talk about the trouble atop his office building. T.I. changed direction, driving to Colony Square to see if he could help in some way. Upon arrival, police turned down his first idea to go to the roof and talk with Josh. He next offered to record a video on his cell phone and send it to an officer on the roof. Surrounded by officers on the roof and news trucks and onlookers below, Josh thought police were making up the story when they offered to show him the video from T.I., who was asking Josh to come down to talk with him.

T.I., as it turned out, was facing his own troubles. He was two months from releasing his seventh studio album and two days away from appearing before a judge to answer charges involving drugs and a previous weapons charge. News reports on following days questioned whether this entire episode at Colony Square was arranged by T.I. as a publicity stunt. It wasn’t. T.I. told reporters, “The fact of the matter is that God put me in a position to help, and I can’t take any credit for that.”

Before authorities led Josh away for observation and questioning, T.I. talked to the stunned young man for a few minutes, telling him that everyone has troubles, but that he shouldn’t give up on life – that things will get better.

Six days later, Ryan invited T.I. and Josh back to the V-103 studio to talk about their meeting amidst the media crush the week prior. T.I. apologized for his own recent mistakes as “unacceptable and inexcusable,” reminding Josh that, “You got to be present to be blessed.” Josh told the radio audience, “God definitely let me know that I cannot give up.”

As it turns out, Ryan Cameron wasn’t in it for publicity either, sharing on the show that “I lost my best friend to this situation where they left behind a lot of people who are still hurting to this day.”  He told Josh his “mental health was the most important thing to me,” offering publicly to be a “life coach” to Josh. True to his word, Ryan still mentors Josh, who now has a job at Publix. Ryan also has had a foundation that over the past 10 years has, among other things, adopted youths in the Bankhead community, the same part of town where T.I. grew up.

A few weeks after the incident, Josh called me, saying he had been asked to speak to a suicide prevention rally in Piedmont Park and he wondered if he could hire me to help with his speech. He had found my name in a google search of PR firms. I immediately met him for coffee at Starbucks and volunteered to help him with the speech and in any other way I could. He’s an extremely likable young man, open about his earlier troubles and his desire to now right his ship. I’ve hired him several times for odd jobs around my firm and he was our guest to the Atlanta PR Interfaith Prayer Breakfast a few weeks later. I introduced him to others who may know of a full-time job with social media. I wish I had one to offer him.

“Now I can say I’m glad I didn’t go through with it,” Josh told me as we looked again at the top of Colony Square more than a year after he had looked out at God’s Creation and decided to keep going. “I’ve learned everything is not about monetary gains, or things that you accumulate in life, because you can get all that. It’s about not wanting to hurt others because that’s a very selfish act of wanting to commit suicide.”

SaportaReport is re-running Season One of Moments for your enjoyment. This column originally published in January 2012.

Next week in Moments: Chris White, who leads a men’s ministry today after a Moment in Corporate America altered his perception and his path.