By Maria Saporta
As published in the Atlanta Business Chronicle on April 15, 2016

When Jamie Dimon, CEO of JPMorgan Chase & Co., came to Atlanta April 8 to speak to members of the Metro Atlanta Chamber, he was on familiar turf.

There was a time when Dimon, who had been ousted by CitiGroup CEO Sandy Weill, considered moving to Atlanta to become CEO of The Home Depot Inc.

During the courtship that lasted about six months, Dimon stayed at Blank’s home four or five times while he was weighing his career opportunities.

“He came really close to saying yes,” Blank told Atlanta Business Chronicle during an interview after Dimon’s conversation with Hala Moddelmog, president and CEO of the Metro Atlanta Chamber. “He was my choice. Bernie (Marcus) and Ken Langone supported it,” Blank said, referring to Home Depot’s two other co-founders. [The company ultimately hired Robert Nardelli.]

In an interview after his talk, Dimon, now one of the nation’s rock-star CEOs, spoke about how he almost moved to Atlanta. “They called me out of the blue,” said Dimon, who was asked by a friend if he had ever shopped at a Home Depot. No he had not, he said, but he quickly remedied that.

“I had dinner with Bernie and Arthur,” Dimon said, telling them, “I’m not a shopper, a retailer or a merchant.”

But that was not a concern for Blank and Marcus, who told him that they were looking for someone with similar values.

“I loved their guys, loved the company,” said Dimon, who enjoyed getting to know Atlanta during his stays at Blank’s home. “I did some house-shopping in Atlanta. I love the wrap-around porches. It came down to I have spent my whole life in financial services.” 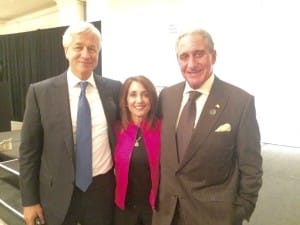 Bank One also was courting Dimon at the same time as Home Depot was making its overtures. “They weren’t in a rush because Arthur was there [as CEO],” Dimon said. “I really decided between those two. We have been friends ever since.”

Blank’s version of the story was similar. “Jamie had 17 years invested in banking and financial services, and he felt that was something he couldn’t leave behind. Jamie and I have maintained a close relationship.”

It’s so close, in fact, that JPMorgan Chase is helping with a lot of the financing for the new Atlanta Falcons stadium and maybe Atlanta United FC’s soccer training facility, Blank said. When asked how much money Blank is borrowing from JP Morgan, he said “It’s significant.”

While Dimon never moved to Atlanta, JPMorgan Chase did.

Back in 2007, JPMorgan Chase opened its commercial bank in Atlanta, which is led by David Balos. At the time, Chase bought a bank that had about 50 branches. Today, the bank has 83 branches and more than 200 ATMs.

JPMorgan has had a presence in Atlanta for more than 15 years, and JPMorgan Chase recently moved into new offices at the Monarch Tower. In all, the financial services company serves more than 1.3 million consumers in Georgia and more than 60,000 small businesses.

When asked about how he views Atlanta, Dimon said it is “definitely an ascending city.” He said Georgia is one of five states in the country that will account for most of the population growth in the foreseeable future.

“Atlanta is an up-and-coming city with universities and a diversified economy,” Dimon said. “It has a good business climate. You have a brand.”

He also described Atlanta as being more cohesive than New York.

But Dimon also was quick to give his views of today’s national climate.

“What goes on today in society is everyone is against each other,” Dimon said. “You need businesses at the table as well as governments and nonprofits.”

That partly explains JPMorgan Chase’s partnership with the Brookings Institution on the Global Cities Initiative. Atlanta was one of the first eight cities selected to join an exchange network of metro areas.

Now the financial institution is focusing its efforts on “New Skills at Work,” a five-year, $250 million global workforce initiative that supports best-in-class training to create career opportunities in the private sector.

A close friend of Dimon is Jeffrey Immelt, CEO of General Electric. They were in the same class at the Harvard Business School.

When asked about how GE and Immelt viewed Atlanta after the company’s 2015 search for a new corporate headquarters (GE chose to move to Boston), Dimon ticked off a list of what factors they most likely studied: Transportation. Education. Schools. Housing. Arts. Traffic. Public transportation.

“They did a complete review,” Dimon said. “I think Atlanta did quite well.”

Another Harvard classmate was Marilyn Davis, chief of staff to the president at Clark-Atlanta University. Dimon gave her a shout-out at the sold-out Metro Chamber luncheon at the St. Regis hotel, and later Davis told bank officials that Dimon had not changed one bit since they were in school together.

Even Jenner Wood, corporate executive vice president of SunTrust Banks Inc. who also is the 2016 chairman of the Metro Atlanta Chamber, was impressed by Dimon’s comments.

“I think he’s marvelous, and I think he’s a dynamic leader for the industry,” Wood said. “He’s a terrific individual.”

Dimon shared a couple of his apolitical comments from the lunch:

“Some people grow into the job and some people swell into a job,” Dimon said referring to people who let their egos get away from them.

“Treat people the same throughout the company,” Dimon said, adding that the CEO’s behavior is always being watched.

If there is a parting of the ways with a long-time executive, Dimon said it is important to thank that person for the work he or she did. “You have never seen me remove a leader and say something bad,” he said.

When asked about millennials, Dimon said that his generation was into long hair, granola and clean air.

“They are interested in the world,” he said. “There are differences, and the differences are technology. Millennials don’t want a bank account until they have a job, and then they want direct deposit.”

When asked about his legacy, Dimon, in colorful language, basically said he hopes he will be missed when he’s gone.