She also over-ruled the objections filed by Clark-Atlanta University, which had argued that Morris Brown College did not have the right to sell most of the property.

The ruling is a major step that will take Morris Brown College out of bankruptcy, and one that could pave the way for the redevelopment of more than 30 acres of land along Martin Luther King Jr. Drive that is a few blocks west of the new Atlanta Falcons football stadium.

After the ruling, the City of Atlanta issued the following the statement applauding Judge Ellis-Monro’s ruling:

Morris Brown College filed for bankruptcy in August 2012 with about $30 million in debt. Since that time, the college has entered in several aborted negotiations to sell its property. Finally, earlier this year, it hired the real estate firm of Jones Lang LaSalle (JLL) to market the property. 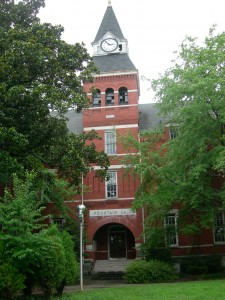 The “highest and best” bid that was submitted came from a joint bid made by the City of Atlanta’s economic development arm — Invest Atlanta, and Friendship Baptist Church. Under that proposed sale, Morris Brown would be able to continue to a couple of historic properties on the 37-acre land holding to continue operating as an institution for higher learning.

But Clark Atlanta University filed a legal objection to the sale. About 17 acres of that property used to belong to Clark Atlanta, and the land was transferred to Morris Brown with one condition. It the property were to ever cease being used for educational purposes, the ownership would revert back to Clark Atlanta.

Judge Ellis-Monro did not dispute that Clark Atlanta holds the reversionary rights to that land.

But she said that all the parties involved — specifically Morris Brown and the City of Atlanta — acknowledge that Clark Atlanta holds those reversionary rights.

“The purchaser is clearly aware of this issue,” the judge said. “The Court realizes that it can only sell what it has interest to sell.”

She cited several cases where properties have been sold by quit claim deeds that contain all the restrictions that existed before the sale. She did not agree with the arguments presented by Clark-Atlanta’s attorneys that the reversionary rights would be triggered by the sale of the land to the City of Atlanta.

She did acknowledge that Clark-Atlanta might seek to get greater clarification of its property rights from the state court, where the matter would best be resolved.

Judge Ellis-Monro, however, said the sale would help Morris Brown College move forward as it works its way out of Chapter 11 bankruptcy.

”The current sale is in the debtor’s best interest,” she said, adding that now Morris Brown College could seek accreditation, which it lost in 2003. “With accreditation, the debtor would be able to increase its student body, which has been about 30 students.”

Judge Ellis-Monro said the sale was key to getting Morris Brown out of bankruptcy, and while she was over-ruling Clark-Atlanta’s objections, she said she was not making a finding of fact on whether the university had an interest in the property.

“The debtor can sell whatever interests it has subject to further litigation between the debtor and CAU,” she said.

But she did stipulate that the proposed sale order must state that the Court was not ruling on the issue of reversionary rights. She said she would need to review the wording in the sale order before giving her final approval.