With guts and WordPress, Judi Knight reinvents herself and others 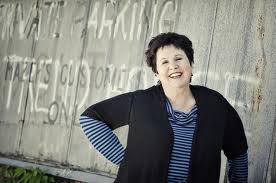 Atlanta property owners were falling into quick defaults over what she saw as “crazy loans.” Her loft conversions stopped “flying off the shelves.” She had to get out of the real estate business before the bubble burst.

“I felt like we were playing musical chairs and I wanted to make sure I had a seat when the music stopped playing,” said Knight, who holds a PhD in psychology and had been CEO of a medical records software company. “I didn’t want to get stuck with all these properties.”

On top of that, she’d gotten a divorce and had even let her license to practice psychology in the state of Georgia lapse, something her friends had urged her to maintain for job security. “I knew I wanted a different life,” Knight said. “It was like Cortez burning the ships. I didn’t want something to fall back on but I didn’t know what I wanted.”

That was eight years ago. Today, Knight is a website designer and one leader of an army without generals or privates trying to reinvent new careers for themselves from the ashes of what they lost or surrendered.

Knight turned herself, almost by chance, into a guru of WordPress, popular free software used to launch websites (including the Saporta Report). There are currently 63 million WordPress websites up and running across the Internet according to WordPress.com.

A tool that helped her unload her real estate properties has now become her livelihood, and her expertise is supporting people who are transforming themselves, too. Diane Kaufman’s hotel job was eliminated in 2006 and she was given the option of moving to Washington, D.C. or accepting a buyout package. She took the buyout, launched Mermaid Cottages, a vacation beach cottage rental service, and Knight helped with the website. 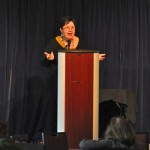 Judi Knight spoke at WordCamp Atlanta 2013, a recent sold-out conference devoted to WordPress, a free software used by many entrepreneurs to start and maintain their own websites. (Photo Credit: Frank Niemeir)

The local appetite for this knowledge is strong: When Knight and other volunteer organizers announced WordCamp Atlanta 2013, a two-day conference at the Loudermilk Center held earlier this month, the 450 tickets were sold out within two weeks. Attendees drove in from South Carolina, Tennessee, North Carolina and all over Georgia.

Similar to the way that TurboTax made it easy for almost anyone to file taxes, WordPress allows people with no web training to put up their own blog or website. Though WordPress is open source—anyone can use it for free—Knight and other entrepreneurs make a living helping people customize and optimize their websites.

Their clients are often a lot like Knight: people starting over, who need an economical profile on the web that they can keep up by themselves. As these business owners craft an online identity for their service or product, they confront how much they are changing, too.

Yoga instructor Isvari Verre turned to Knight for business advice and a new website when she set out to start her own studio. Verre said Knight immediately recognized that was she terrified about the step she was about to take, and gave her a pin.

“It said “(Expletive) fear,” Verre said. “She put it out there. Then it was down to business.”

At 59, Knight does not fit the stereotype of a basement-dwelling cybersavant. She planted her old dog tongue firmly in cheek and named her company “New Tricks,” because if she could teach herself website design, anyone can learn it. Her dog is also part of her business story.

She taught herself WordPress in 2005, initially not as a career move, but to list the remaining properties she needed to get rid of online. She had designed her previous website but updating it was difficult.

She also kept a web page for her dog on the pet social networking site, Dogster, One day when Knight Googled her own name, her dog’s site listed at No.1. Her business showed up at the bottom of the fourth page of the search results.

A variety of Internet specialists that she consulted explained that Dogster was a blog, which can outperform other websites, in part because blogs tend to be more frequently updated and that moves them higher in search engine results. 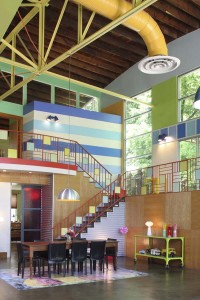 Judi Knight operates her company New Tricks out of her home in Inman Park, which is also Urban Oasis Bed & Breakfast. The new economy has forced Knight and others to create new identities and ways of making a living, and her business now caters to reinventors. (Credit: Urban Oasis)

Knight discovered WordPress and taught herself the content management system. Later, when faced with trickier problems, such as how to upload pages directly to and from the Internet, Knight taught herself how to do that as well, instead of languishing on a waiting list for help from a professional.

“I had a lot of time on my hands and a lot of (real estate) inventory to move,” she said. Much of that time was in coffee shops, when people would overhear her talking about web design and WordPress and ask her for her card. “I’d say, ‘no I don’t actually have a business.’ And that kept happening,” she said.

In 2009, Knight said she asked two web developers on her prospects of starting a successful web design company.

“I got two definite ‘no’s,’” Knight said. “’We’re laying people off,’ they told me. ‘People don’t want to spend money in this economy.’”

Dejected, Knight was at a turning point. She decided to “trust in my gut” that there were enough people who would need to change direction in the Great Recession.

Today, she is remarried and based in Inman Park, where her home does triple duty as the New Tricks office and as the Urban Oasis Bed and Breakfast. A converted loft, it represents the life she left. When she hosts WordPress meetups, her home welcomes others into the life she has created.

“With these new tools, I’m seeing people starting new businesses and finding themselves happier than they were,” she says. “I love being a part of that.”

Ben Smith is a freelance writer based in Decatur. He can be reached at [email protected].