The Atlanta Dream will soon be under new ownership.

Kathy Betty — a prominent Atlanta businesswoman, sports advocate and widow of former EarthLink CEO Garry Betty — will become managing partner of the Dream, pending league approval. She is first woman in Atlanta history to own a professional sports team.

The team will be owned by Dream Too LLC, an investment group led by Betty.

In addition to serving as the CEO of the Garry Betty Foundation, established by her late husband to fund cancer research, Betty is a former partner with Ernst & Young and previously was the executive vice president of Scott Madden Inc., an Atlanta-based management consulting firm. She also is a major contributor to Georgia Tech’s men’s and women’s basketball programs. 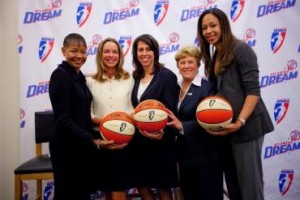 “The opportunity to own the Dream, which is all about providing accessible and affordable world-class entertainment for the families of Atlanta, is what excites me,” Betty said. “In addition, the fact that these women serve as role models for youth, and especially young girls, is something I feel strongly about.”

In 2009, the Dream recorded the second-largest one-year turnaround in WNBA history, finishing with an 18-16 record after going 4-30 in its inaugural campaign in 2008 to earn the second seed in the Eastern Conference and their first-ever WNBA Playoff berth. Forward Angel McCoughtry, the top pick in the 2009 WNBA Draft quickly emerged as a star and earned adidas Rookie of the Year honors, while Marynell Meadors was named WNBA Coach of the Year this past season.

The Dream was owned by Ron Terwilliger, a multifamily residential real estate developer who helped bring the WNBA to Atlanta in 2007.

But the Dream came precariously close to no longer being in Atlanta. Terwilliger, chairman of Trammell-Crow Residential had let the women’s basketball team revert back to the WNBA. There had been discussion that the team would be moved to Tulsa, Oklahoma, but a concerted effort by Atlanta leaders kept the team in Atlanta.

They approached Kathy Betty, a sports enthusiast who is the widow of Garry Betty.

WNBA officials did not disclose the purchase price for the team. Two years ago, Terwilliger had said he would invest $10 million to buy the team, but that was to be given over a period of years.

Donna Orender, president of the of the WNBA league, said the current purchase price was “comparable.”

At the end of the press briefing, Geller made a point of giving credit to Borders for making the deal possible.

“This would not have happened but for Lisa Borders,” Geller said. “In the middle of an intense mayoral campaign, she helped secure some sponsorship dollars. She raised the money we needed. We would not have made it without Lisa.”