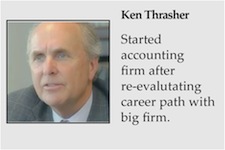 In 1979, Ken Thrasher was enjoying a successful career at what is now PricewaterhouseCoopers in Atlanta when he and his wife heard a Sunday sermon that prompted him to re-evaluate his life and to start his own business. Today, Bennett Thrasher is the ninth largest accounting firm in the city and its origins can be traced back to Ken’s Moment in the pews at Westminster Presbyterian Church in Snellville.

Ken and Cathy – then his wife of three years who was succeeding in her own career as a sales representative – were not unlike other couples: Busy climbing the corporate ladder without much perspective on their long-term paths.

As the couple listened to Pastor Fred Moore describe the importance of setting priorities in life, recounting how people often get so caught up in their careers that they neglect more important things such as family, Ken began to recall a Friday night during his high school years.

A teenager growing up in Macon, Georgia, Ken was reluctantly working the cash register at his local Kmart Foods, when he’d much rather have been out with his girlfriend. After observing his cursory attitude toward the customers, his boss, Mr. Whirley approached. “He looked me right in the eye and said, ‘Ken, I know you can do better than that.’ ”

A decade later, as he listened to his pastor, Ken heard an echo of Mr. Whirley, this time weaving into the lessons from that day’s sermon.

The pastor told an anecdote about a man eagerly climbing the corporate ladder and, when he finally reached the top, learned the ladder had been leaning against the wrong wall all along. The problem with a rat race, he said, is that at the end of it, you’re still a rat.

Ken reflected on his own career path at Price Waterhouse and realized he could do better for himself. “It made me think about the wall my ladder was leaning against. Hearing that sermon instigated me into thinking about what was really important in life and what Cathy and I wanted in life,” Ken told us during the filming of our accompanying Moments video.

The Thrashers didn’t have a family yet, but they planned to at some point. Ken’s own experience as a kid – moving to different towns with his father’s career promotions – didn’t allow him to put down roots in any community. He realized he didn’t want that same experience for his family. Staying at the big accounting firm could take him to an exciting life in New York, but he and Cathy wanted to put down roots in Atlanta.

“Price Waterhouse was a fabulous firm and I learned a lot there and am very grateful for that – but I decided I wanted a change,” he said.

He began to talk with Rick Bennett, one of his work colleagues, whom he discovered was of like mind. Within six months of hearing that sermon in Snellville, he and Rick quit their jobs and started Bennett Thrasher.

“We sort of had a vision of a different kind of firm – we wanted to take the quality of the professionalism of the big firm, but do it more in a local firm type of environment,” Ken said.

They started with one client – a close personal friend – but their firm grew as the Atlanta market boomed in the decades that followed. Today, Bennett Thrasher has 22 partners and 164 associates.

“The firm has prospered here in Atlanta,” Ken recalled. “We have been fortunate to be in a great market and a great environment and have had a lot of people join us in an effort to grow the firm.”

Their values have remained constant. Posted prominently in the firm’s lobby are the words “Integrity, Family, Clients.”

“We put in simple terms what we think envelops a great firm,” Ken said.

Ken and Cathy eventually grew their own family. They have three sons – each of whom graduated from Ken’s and Cathy’s alma mater, the University of Georgia, and now live in Atlanta in pursuit of their own careers.

“We are very happy about that,” Ken said. “It’s been so gratifying to raise a family here in Atlanta and the opportunities to be involved in the community through things with our children – we all grew up here.”

In his free time, Ken has served as a volunteer coach for a youth baseball league, Lovett Lionbackers, Northside Youth Organization and was president of the Buckhead Baseball. He is a member of the Board of Directors of Leadership Ministries Inc., and Chairman of the Leadership Ministries Foundation. He also serves on the alumni board for UGA’s Terry College of Business. He also has served as chairman of the Southern Federal Tax Institute.

“If it were not for that Moment in 1979 when I heard that sermon, I can’t imagine the different course my life might have taken,” Ken said. “My whole life would have been different.” 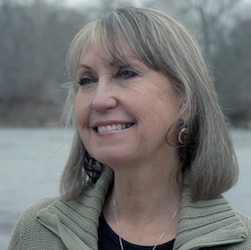 Next week in Moments: Sally Bethea

Next week in Moments: Sally Bethea, Founding Director of Chattahoochee Riverkeeper, when she was inspired to action by Robert Kennedy Jr.