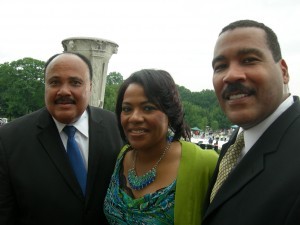 Martin Luther King III, Bernice King and Dexter King on the 50th anniversary of the March on Washington on Aug. 28, 2013

The King Estate has voluntarily dismissed without prejudice its lawsuit against the King Center, Dexter King, according to a press release issued  Thursday afternoon.

“It has become apparent that my brother, Martin King III, chairman of the King Estate, has had a change of heart in recent days as it relates to the lawsuit filed in 2013.” Dexter King said,. “And therefore I instructed the Estate’s attorneys to withdraw the lawsuit.”

The lawsuit was filed in 2013 at the behest of Martin King III and Dexter King, after the results of an internal audit of the King Center allegedly showed that hundreds of items that once belonged to Dr. Martin Luther King, Jr. – now property of the King Estate – were being housed in unsafe, unsecure conditions, and in jeopardy of fire and water damage.

Martin Luther King III, Bernice King and Dexter King on the 50th anniversary of the March on Washington on Aug. 28, 2013 (Photo by Maria Saporta)

In 2013, on the same day as the 50th anniversary of the March on Washington, the King Estate sued the King Center for the safe return of its property, as well as for violating the terms of a 2007 Licensing Agreement allowing it to house and display King memorabilia belonging to the King Estate.

Speaking about the move to dismiss, Dexter King said, “For me this is a show of good faith as we, as a family, enter into talks to resolve these issues outside of the courtroom.”

The case of the King Estate versus the King Center was set to go to trial on Jan. 26. Martin King III, chairman of the King Estate, had called for a meeting of the board to propose a “grand resolution” of their differences.

Dexter King, working through the King Estate’s lawyer, William Hill, had tried to block such a board meeting from being held by filing and  receiving a Temporary Restraining Order.

Fulton County Superior Court Judge Todd Markle dismissed the Temporary Restraining Order late Tuesday afternoon – giving Martin King III the ability to call another board meeting. Martin and Bernice would have a majority vote if they were united on the same side of the issue.

The press release from the King Estate stated that the family will be meeting later today to begin settlement discussions.

“We do have some very serious issues to address and resolve, and I hope that we will be successful in doing that amongst and with each other. I understand my brother’s apprehension days before a public trial, and I share those concerns,” Dexter King said in the statement. “None of us want to see the legacy of my parents, or our dysfunction, out on public display. But at the end of the day, I work for, and in the best interests of the King Estate. I got into this with Martin, and hopefully we’ll get out the same way.”

No decisions have been made regarding the King Estate’s suit against Bernice King as it relates to ownership of Dr. King’s Nobel Peace Prize and his traveling Bible. However, Dexter King hopes that those issues too will be resolved prior to a public trial.

“I’m sure that that lawsuit will also be a part of our settlement discussions,” Dexter King said in the statement. “Luckily that trial is not set to begin until the end of February. But it is my hope that those issues will be resolved long before then.”