An artist’s walk through the valley of censorship

After censorship, can there be reconciliation?

That was the question for Atlanta artist Ruth Stanford on a recent visit with her to the re-installation of  “A Walk Through the Valley” at Kennesaw State University. A month ago, the university’s president ordered her artwork removed from the Bernard A. Zuckerman Museum of Art as controversial. 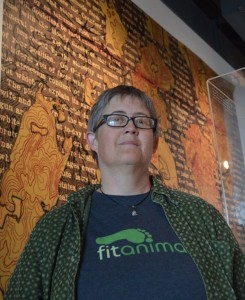 Artist Ruth Stanford, whose artwork, “A Walk in the Valley,” made headlines when Kennesaw State University removed it. It has since been restored.

It’s back after the sides found common ground, but the notoriety forced Stanford to scrutinize her comfort zone as an artist and sort out the ambiguities exposed by an issue of censorship that seemed so undebatable.

Is it possible for an introvert to take a stand as an artist?  That question came up early.

When Stanford met with KSU president Dan Papp after the university’s decision to have the piece pulled because it “did not align with the celebratory atmosphere of the museum’s opening,” she brought a mentor. George Beasley is professor emeritus of fine art at Georgia State University, where Stanford is a professor.

“Ruth’s a bit of a turtle,” Beasley said. “She doesn’t like to draw attention to herself.”

Stanford couldn’t deny the truth in the joke. Her art has never invited controversy. Far from a Mapplethorpe, she’s more of a flannel shirt, under-the-radar creative type.

“It’s one of my shortcomings as an artist,” she recalled during our trip to see the artwork.

But now that KSU had drawn attention to her, she couldn’t pop back in her shell. She had to figure out a way to navigate her way without losing herself.

“The reaction was crazy. For two weeks Facebook was buzzing, my phone was ringing off the hook,” she recalled. “I had never dealt with that kind of publicity before.”

Stanford said she heard from a petition group that had gathered signatures from as far away as Finland and Australia.

“The support from the Atlanta arts community and from entities nationwide was immediate and strong and I knew I would do them a disservice for not speaking up,” Stanford said. “But I wanted to act with honesty and without making any rash decisions.”

She was in a position of complexity, which is where her artwork had begun.

The legacy of Corra Mae Harris

“A Walk Through the Valley” draws attention to Georgia writer Corra Mae Harris (1869-1935), who owned the farm which the university now owns. In a parallel to Stanford, Harris took a stand a century ago and seized a national platform—not through visual art, writing. 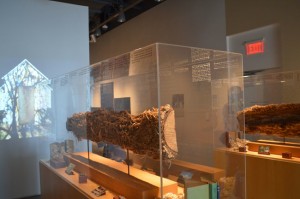 The display includes fragments found on Corra Mae Harris’ property, quotations from her work, Ivy-covered pieces of wood and a video of the exterior of the author’s house.

The display includes two Plexiglas encasements containing shredded novels, shards of pottery and pieces of wood covered on one side in English Ivy found on her property. The encasements are marked with quotations from some of Harris’ novels and nonfiction. Among them are a warning about eating biscuits made north of the Mason-Dixon line, musings about the gap between human and divine justice as well as her thoughts on mortality.

One of the display’s most prominent features is a large mural featuring a Bartow County topographical map that includes Harris’ home, overlaid with text of Harris’ 1899 letter to the New York Independent. In response to an editor’s letter condemning a lynching that occurred in Georgia,

“In the South every white woman lives next door to a savage brute who grows more intelligent and more insolent in his outrages every year,” Harris writes. “At no time, in no place, is the white woman safe from the insults and assaults of these creatures.” 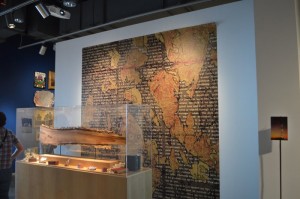 This mural blends a topographical map of the area where Harris lived with a racist screed she wrote to a New York magazine in 1899. The entire artwork was temporarily removed because of this part of the display.

“The negro is the mongrel of civilization,” Harris writes. “He has married its vices and he is incapable of imitating its virtues.”

Stanford is blunt about the content: “You read that 1899 letter and it is really ugly,” she said. So repugnant that in 2009, many KSU faculty members and students protested the donation of the writer’s 56-acre Bartow County homestead.

So who was the real writer: the racist Harris who penned the racist letter to the editor, or the gifted author of popular novels?

“I checked out a few of her books from the library, and when I opened those books, on the first page I’d often see something that was really poetic and beautiful,” Stanford said. “And it was interesting to me. How did those two things exist in the same mind?”

A resonant answer came from Catherine Oglesby’s biography of Harris, which described her as “a complex and contradictory character,” Stanford recalled. “I latched onto that idea. I began to see metaphors for complexity and contradiction.”

On that artistic tightrope, Stanford said, “I didn’t feel like I could honestly eliminate the letter.”

She didn’t realize she would be taking a stand until KSU decided her piece had to go. That’s when she had to push past her introverted nature to explain what she had made and why it was important.

When KSU pulled down the exhibit, Stanford opted to attend the opening of the Zuckerman Museum, which had been supportive of her, but skipped the V.I.P. reception.

Instead of shouting through a bullhorn, she used a pen to lodge her protest. 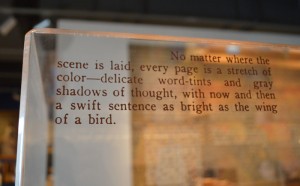 While Corra Mae Harris may have harbored ugly sentiments about race, she could write prose that was “poetic and beautiful,” Stanford says.

“No honest person — whether an artist, academic, or university president — could comment on such a legacy [as Corra Mae Harris’] without acknowledging it in full, and the work I produced included text from the 1899 letter,” wrote Stanford in Creative Loafing on March 11. “My work also acknowledged the beauty of the land, the mystery of found objects, the grace of some of Harris’ other writings, and even the texture of the air in the homestead chapel.

“Harris meant every word of her 1899 letter, a profane, ignorant, and inhumane explanation of lynching,” wrote Stanford. “She also was a fan of the work of W.E.B. Du Bois. I struggle to wrap my head around those two conflicting truths, but I know for certain that there is something I can learn about myself and perhaps the world we all share from trying.” 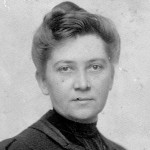 When the university reversed its decision and offered to restore “A Walk in the Valley,” Stanford didn’t jump at the offer. She mulled whether the controversy had altered the context of her work. Would people see it the way she had originally intended?

“I ultimately decided that the university’s decision to remove the piece in the first place was a decision not to trust the viewers,” Stanford said. “I decided I would trust the viewers and welcome any and all opinions. Also, the museum had no role in what happened. The decision was imposed on them. Not to restore it would be to question their mission.”

Stanford also said the experience taught here the virtue of coming out of her shell. It is a lesson that has influenced how she teaches her GSU sculpture students.

“When something like this happens, it puts you in a position where you have to talk about your work,” Stanford said. “An artist should always be prepared to talk when it becomes this public. When it becomes an issue that is this important to people, it magnifies that responsibility not only for me as an artist but as an educator.

“The other thing is that it is equally possible I can learn something from the way people perceive my work,” Stanford said. “I welcome that.”