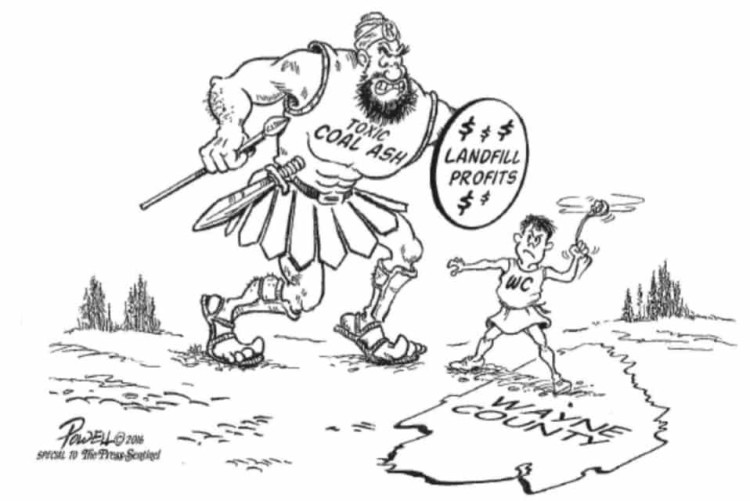 This David and Goliath editorial cartoon is one in the series published in The Press-Sentinel, which is owned by Dink NeSmith's Community Newspaper, Inc., which opposes the coal ash pond proposal. File/Credit: Dink NeSmith

By Guest Columnist DINK NESMITH, a Jesup native who is president and co-owner of Athens-based Community Newspapers, Inc., publishers of newspapers in Georgia, Florida and North Carolina

How far back can you remember? 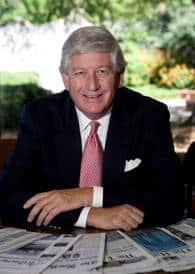 Our three children, Alan, Emily and Eric, joke that I can remember the day I was born in 1948. Actually, I can’t. I tease them that I do recall the ride home from Ritch-Leaphart Hospital in Jesup, 40 miles from the Atlantic Ocean. My undertaker dad was behind the wheel of the 1947 black Cadillac hearse that doubled as an ambulance for Harrison Funeral Home. In the back, I was nestled on a feather pillow – stuffed inside a starched white pillow case – inside a chocolate-brown wire basket. Mother was sitting beside me, cooing to her second-born, who would get his father’s nickname.

But if I close my eyes tightly, I can see my tiny hands clasping Big Dink and Margie’s as they lead me up the wooden steps of the old First Baptist Church that once squatted on the corner of Macon and Plum streets. If the doors flung open, my folks, my sisters and I were stepping inside. For years, the Rev. Floyd Jenkins’ sermons skimmed over my buzz-cut head. However, many of the biblical stories stuck. One of my favorites was from 1 Samuel 17:32.   I could picture little David whirling a stone in his leather slingshot. I could hear the thud of Goliath hitting the ground.

And since the 1950s, squirming and polishing those hard pews with my skinny behind, I’ve been a fan of underdogs. Think back to your playground days. Remember the taunting smirks on the faces of bullies? My great-grandpa was a pint-sized mule farmer with the feisty attitude of a bantam rooster. “If he’s bigger than you, son,” he’d say, “pick up a lever and knock the hell out of him.” 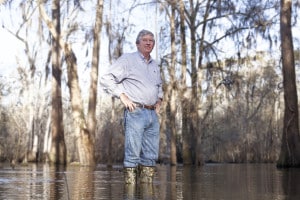 Since mid-January, I’ve been swinging my lever to keep a multibillion-dollar waste-management bully from dumping up to 100 railcars of toxic coal ash – 10,000 tons per day – into the piney woods outside my hometown. If you’ve been following the news, you know that coal-ash-producing utility companies are looking for ways to get rid of the stuff. Poor rural communities – i.e., Uniontown, Ala. – are prime targets for coal-ash dumping. Local leaders are seduced by millions of “easy” money, without considering the downside of turning their towns into an environmental prostitute. There’s a corporate Goliath that could become my hometown’s coal-ash pimp.

Welcome to the coal-ash fight in Southeast Georgia.

Republic Services, a Phoenix-based conglomerate, owns a private landfill in Wayne County. Since acquiring the facility in 1996, it has been quietly enlarging its footprint to 2,200 acres. Between 2006 and 2014, its Broadhurst Environmental Landfill accepted 800,000 tons of toxic coal ash from Florida’s Jacksonville Electric Authority. This revelation, along with a 2012 heavy-metals leak of dangerous beryllium into the groundwater, went more or less unnoticed until January. That’s when our newspaper, The Press-Sentinel, caught wind of Republic’s gargantuan plan to make our community the national albino lab rat to test how much contamination can be piled into one spot, our ultra-sensitive ecosystem. 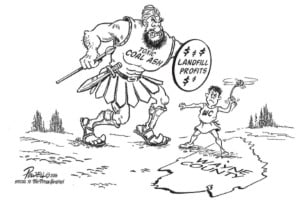 This David and Goliath editorial cartoon, by Jim Powell, appeared as one of a series published in The Press-Sentinel, owned by Dink NeSmith. Credit: Dink NeSmith

Broadhurst sits atop the Floridan Aquifer, which supplies millions with drinking water. Republic’s landfill borders the Little Penholloway Creek, which flows into the Penholloway Creek, which joins with the Altamaha River, which wraps around Little St. Simons Island and empties into the Atlantic. Plumbers will attest: “Hot water goes on the left and stuff must run downhill.” If Republic gets its wish, the Golden Isles – downhill from Wayne County – needs to get ready.

Our coast’s marshes and estuaries face further contamination. Seafood could be tainted with mercury, lead, arsenic and beryllium, just to name a few. Georgians should be outraged over what is about to be dumped into Wayne County’s sandy, leaks-like-a-sieve soil. Republic argues that its lined landfill won’t leak. Passengers sailed on the Titanic, with the assurance that the ship was “unsinkable.” Why should we trust Republic’s claims? Facts prove landfills can and will leak, eventually.

So, how did this horror of horrors happen?

On Jan. 4, Central Virginia Properties, LLC, an unknown subsidiary of Republic, filed an application with the U.S. Army Corps of Engineers to destroy about 25 acres of wetlands to install a massive rail spur to accommodate mile-long CSX trainloads of toxic coal ash. Add to that countless quantities of garbage from faraway places, including Republic-served New York City. 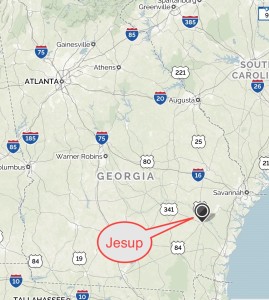 Jesup is located in the Altamaha River basin, which the Nature Conservancy has identified as one of “America’s Last Great Places” and has established the Altamaha Bioreserve. Credit: mapquest.com, David Pendered

Nine days into the 30-day public-comment period, Republic’s sneaky, public-be-damned scheme was uncovered by The Press-Sentinel. Life hasn’t been the same since. Public outcry has been deafening. The Corps listened and extended the public-comment period twice. Now, we await its decision.

On March 16, more than 500 citizens overflowed Jesup’s college auditorium. They wanted answers from the Corps, Georgia’s Environmental Protection Division and Republic. The people went away, further riled, with even more questions. By now, locals are aware of how Republic snookered officials in 2005, seeking “minor” contract modifications to streamline and “clean up clutter” in the wording.

Instead, Republic slipped in major changes, opening the door to today’s mess and restricting the county’s challenge of the company’s future plans. It’s a horrible, lopsided 50-year contract. Now, some county commissioners sigh, “Oh, well. Our hands are tied.”

Thousands of Wayne Countians are just as incensed as I am. I am not about to back away from a bully that’s trying to endanger my family, my friends and our environment. My stubborn mule-farmer DNA, inspired by David’s fearless stand, won’t allow it.

I threw my heart into this nasty fight. My wallet followed. Today, my lever is a slingshot. The stone to bring down this Goliath is information – the right information.