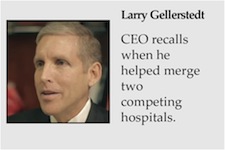 In 1995, Larry Gellerstedt III had a difficult choice to make. For nine years, he had been CEO of Beers Construction, a $1 billion firm his father had led before him. The firm had successfully served two long-standing clients that were also bitter rivals by dividing Beers’ healthcare division into two teams. (Skanska acquired Beers in 1995.)

Larry led the team that managed construction at Scottish Rite Children’s Hospital, while his dad led the relationship with Egleston Children’s Hospital and also served on its board of trustees. That seemed to work just fine until Larry Jr. retired from the Egleston board in 1995.

Things got awkward when the Egleston board asked Larry to follow his father onto its board even though he had led construction for its biggest rival.

“I went to the chairman of the board and CEO at Scottish Rite and asked if this would be OK,” Larry said. “And they said no, it would not be OK – they wanted me to be on the Scottish Rite board.’”

This is when Larry had his Moment.

“I thought about that, and I said, ‘Why don’t I join the Egleston board with one of my goals to be to improve the communications between these two hospitals?’” he told us in our accompanying Moments video interview.

Not only were both hospitals facing exploding patient care costs, the two nonprofits competed fiercely for their own livelihoods, i.e., fundraising. Now the two were also locked in a building war, each raising technologically advanced towers in DeKalb County: Egleston at Emory, Scottish Rite in Dunwoody near St. Joseph’s Hospital, an area many call “Pill Hill.”

Though the philanthropic community had long since tired of the competing fundraising campaigns, no one had stepped forward to fix it – until Larry joined the Egleston board.

“There was very little crossover between borders,” he said. “I happened to have credibility in both camps.”

So Larry arranged a dinner at the Capital City Club. He invited three Egleston trustees and three Scottish Rite trustees.

“It was a tense meeting.” Larry said. “There was a lot of passion from both sets of trustees about their individual institutions.”

As the evening came to a close, Larry moved to narrow the differences. He asked if he could offer three statements to which both groups might agree. Everyone turned to the evening’s host.

The first known truth, Larry proposed, was both hospitals had validated that children had better medical outcomes in independent pediatric hospitals than they do in pediatric floors that were part of larger, adult healthcare systems. The second truth he proffered was, given the direction healthcare was going, Atlanta would not be able to sustain two successful and independent pediatric hospitals. The group reluctantly nodded in agreement.

At that Moment, the territorial zeal of the rival hospitals began its slowly dissolve. A year later, in 1998, the committee managed a merger between Egleston and Scottish Rite to form Children’s Healthcare of Atlanta (CHOA). Larry served as chairman of its first board.

In 1995, neither Scottish Rite nor Egleston ranked in the top 20 for any measurable standards in children’s healthcare. Today, CHOA ranks in the top five for every measurable standard, Larry said. In 2006, in another merger of competing children’s hospitals, CHOA assumed responsibility for the management of services at downtown’s Hughes Spalding Children’s Hospital – growing the system to three hospitals and 17 neighborhood locations.

Today, Larry serves as president and CEO of publicly traded Cousins Properties. His business and philanthropic leadership was recognized this past week when Business to Business magazine named him CEO of the year, an honor previously bestowed upon him by Atlanta Business League. The Greater Atlanta Chapter of the Association of Fundraising Professionals named him its Volunteer Fundraiser of the Year last year.

Larry joined Cousins in 2005. Since he became its CEO in 2009, he has helped turn the stock price around after significantly trimming the firm’s workforce and reshuffling its portfolio.

In 2011, Larry migrated Cousins’ Atlanta headquarters from the 36th and 37th floor to the 5th floor in the 191 Peachtree tower, which Beers Construction built in 1990 and Cousins purchased in 2006. After Larry announced the move, some employees took notice of the smaller, “more efficient” office space that provided fewer offices and fewer windows.

Sensing an opportunity to lead by example, Larry designed his CEO suite near the elevators, squarely in the middle of the floor ­– with no windows – allowing his employees to be nearer the exterior glass.

Glancing around his office, Larry smiles knowingly as he recalls the selection of his interior office. He sits below large framed photos of the skeletal steel construction of Midtown’s Bank of America tower – still the tallest U.S. tower outside Chicago and New York – that Beers built under his watch in 1992.

“It just seemed to be the right thing to do,” he said. 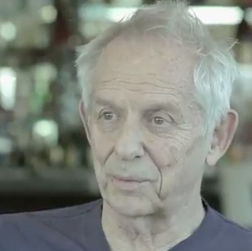 Next week in Moments: Jerry Farber

Next week in Moments: Jerry Farber, longtime Atlanta comedian, when he unexpectedly performed his first routine for 300 guests.