How many of the combat veterans returning from Iraq and Afghanistan will pick up a new sport, turn professional and win three of that sport’s most prestigious trophies?

That far-fetched fairy tale happened to an Atlanta soldier drafted into Vietnam. In the foxholes, Larry Nelson heard guys talking about golf. When he returned to Cobb County, he set about becoming the best – and did it.

This weekend, as Atlanta Athletic Club in Johns Creek hosts the PGA Championship (golf’s final major title; the Masters in Augusta is the first), Nelson’s remarkable career is a fantastic shadow story from that same course 30 years ago.

By starting golf at age 21 and winning two PGAs (the first in 1981 at Atlanta Athletic Club) and the 1983 U.S. Open, Nelson’s career stands as even more improbable today.

The most elite athletes — think Tiger Woods, son of a Vietnam veteran, named for his father’s combat pal — are specialized early in life, branded and commercialized. The burning question isn’t to serve one’s country, but when to leave school for the pros. 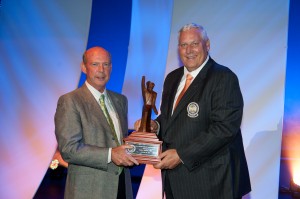 On the eve of this weekend’s tournament, golf pros from all over the country – as well as U.S. Sen. Johnny Isakson (R-Ga.) — packed the Cobb Energy Performing Arts Centre to honor Nelson. They gave Nelson their Oscar — the PGA Distinguished Service Award — for what he’s done for the sport.

At 63, Nelson’s legacy only starts with the major golf titles. He blended his sport with his faith, both globally and at home. He helped start the Fellowship of Christian Athletes junior golf camps, a recreation center in the Philippines, the First Tee of College Park (which helps introduced disadvantaged kids to the game) and numerous other projects.

“I want my boys to turn out like Larry Nelson,” said Lanny Wadkins, who lost the 1987 PGA to Nelson in a playoff.

“He’s the kind of individual who will do anything and everything to give back to his community,” said Dr. Daniel S. Papp, the president of Kennesaw State University, which was a junior college when Nelson enrolled on the GI Bill.

Nelson brought his quiet, unassuming nature, to the microphone in accepting the PGA honor. He thanked by name dozens of people who helped his career, from Bert Seagraves, the pro at Pine Tree Country Club in Acworth who gave him his first golf job, to Mallory Crosland, the PGA event planner.

He compared himself to the proverbial turtle on a fencepost. “I didn’t get there by myself,” Nelson said. 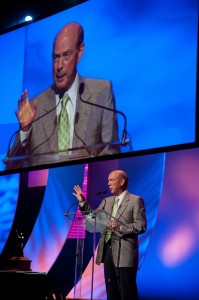 He came from a family so unschooled in golf that after watching him play a poor round, his father remarked, “Son, I don’t know much, but if I were you, I’d hit it closer to where those flags are.”

He told a typically Atlanta story of how he happened to meet his early investors, without whom he could not have afforded the costs of professional golf. These were men in the footsteps of Henry Grady, who saw a raw Southern product that was worth pushing to a national audience.

Nelson was playing alone at Pine Tree when he came to a foursome on the ninth tee and asked if he could play through. He ripped a drive from the way back tees, and the foursome – Delta pilot Larry Bacon, club manager Larry Houston, electrical contractor Bill Grice and chicken processor Chet Austin — eventually became his sponsors.

In 1970, they and Pine Tree members threw him a party right before he left for his first mini-tour, the minor leagues of golf. “We walked in, and there was a tree covered in money,” Nelson recalled. “That’s how we got started on Tour.”

By 1974, he had his playing privileges. By 1979, he won twice and finished second on the money list. In 1981, he drove in much less traffic from his home at Atlanta Country Club to what is now Johns Creek. He took home his first major by four strokes over Fuzzy Zoeller.

Another part of Nelson’s fairytale features a princess. He met his wife Gayle at age 5 in church. They like to say they dated for 14 years. They married just after her high school graduation, a few months before he left for 111 days in Vietnam.

In late 1967, the Tet Offensive had begun, and at age 20, Nelson was an E-5 infantry sergeant in combat just south of Chu Lai.

“He was introduced to golf by the guys in the foxhole who couldn’t stop talking about it,” said Josh Nelson, one of his two sons.

“He told himself if he made it home, he’d tried to play himself… after what he had been through, with lives truly at stake, having a one-shot lead in a major championship did not have the same impact on him [as it might on other players].”

“He did not get shaken,” said Joe Inman, a Tour player with Nelson who is now the golf coach at Georgia State. “He was flat-lined. You could not tell if he was 8 under par or 8 over. That’s when you know you have a champion.”

A day after the big award, Nelson teed off at the PGA. He shot 78, his bag carried by oldest son Drew. On Friday, he shot 75, with son Josh as his caddie. Nine shots lower, and Nelson would have made the cut.

Sports are about numbers like those, but the statistics never tell the whole story. On Sunday, the lowest score will take home the 93rd PGA Championship trophy, while the next county over, the veteran with a most remarkable PGA story soldiers on.

Michelle Hiskey is a freelance writer based in Decatur. She can be reached at michelle.hiskey@gmail.com.