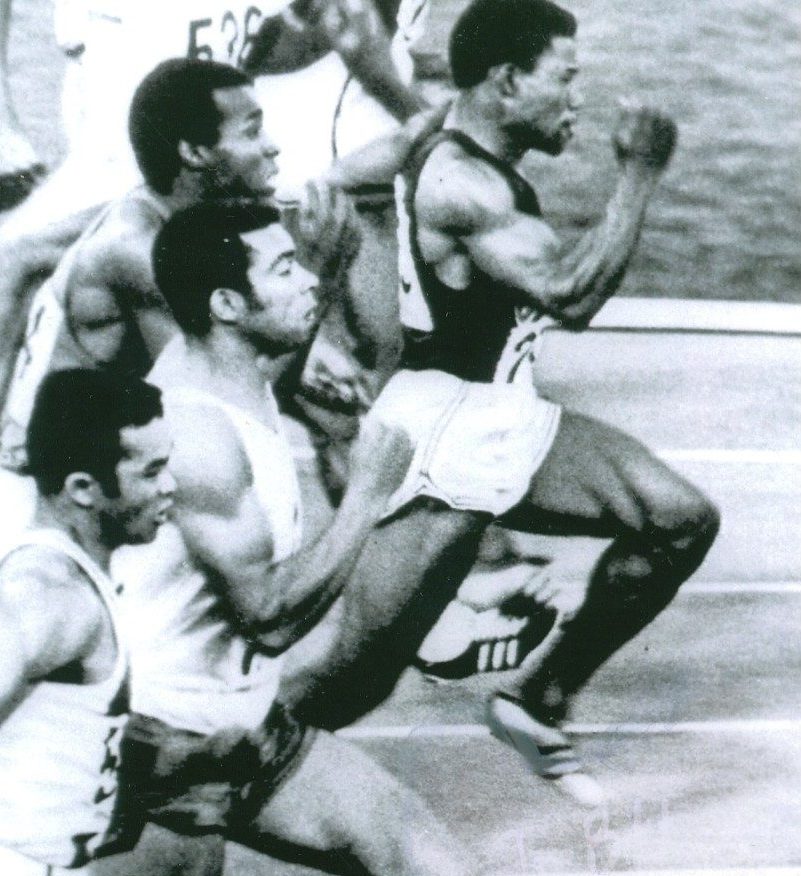 Mel Pender, leading the pack of sprinters, at the 1968 Summer Olympics in Mexico City

Jamil Zainaldin recently identified eleven characteristics of leadership and reminded readers about some of the sterling leaders who have lived and worked in Georgia. He left us with a question: “what leaders would you add to my list?” I would add Melvin Pender of Kennesaw, whose name may be unknown to many, but whose deeds as a veteran, Olympic champion, and leader in business and civic affairs speak to the best of the American promise and Georgia motto, “wisdom, justice, and moderation.”

Melvin Pender was born on Halloween in 1937 as a “Grady baby,” and grew up in Lynwood Park in DeKalb County, which is now part of Brookhaven. His father, a World War II-era navy veteran, came from Dalton. In his memoir Expression of Hope, Pender describes the churches, schools, Cub Scout troop, and neighborhood businesses that shaped life in segregated Lynwood Park. His grandfather worked at a dairy, and his “Wowa” cooked and cared for the children. Other neighbors, like Mrs. Idell Jones, would attend baseball games and sell fish sandwiches for refreshments. She would also keep an eye on the children, and if they misbehaved, they would face consequences from parents, teachers, and Mrs. Idell.

Despite the challenges of Jim Crow, the community emphasized faith and patriotism. Each school day began with the pledge of allegiance. Veterans were influences on Pender, from his father, to the veteran who showed movies for community entertainment, to the disabled veteran who was a cab driver. He also idolized Audie Murphy, whom he learned about from newspapers and films. 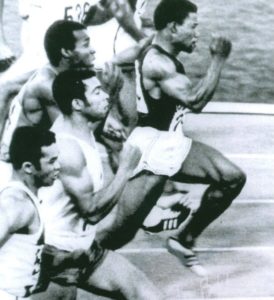 Mel Pender, leading the pack of sprinters, at the 1968 Summer Olympics in Mexico City

Before his 18th birthday, Pender enlisted in the army. He was married and had a child, so he had responsibilities. He also envisioned that the army would provide opportunity and perhaps a departure from segregation. Those illusions were quickly crushed, but he moved up as an enlisted man through hard work and discipline. He took particular pride in his uniform and polished shoes, and the sharp appearance garnered him opportunities to advance from manual labor building runways in England to driving trucks and eventually becoming the company commander’s driver.

Later, Pender served with the 82nd Airborne with jumps in the Philippines, Korea, Alaska, and Okinawa. He advanced to sergeant. Though he was only 5’6” and slight of stature, he began to participate in athletics in the military playing football. In 1961 at the age of 25, military higher-ups sent him to a military track meet on the island of Nago, Japan. It was a friendship meet against the Japanese Olympic track runners. Though he had never competed in track before, he followed the advice of his coach “just follow the other guys and do what they do. They won’t beat you any way.” Pender won the meet and became the Pacific champion.

The army sent him to train for the Olympics, and he qualified in 1964. Due to an injury, he did not medal. He was 27 years old, beyond the age of the typical sprinter, so he thought his athletic career was over. However, his experiences with military athletics gave him confidence and he applied to Officer Candidates School.

Once he finished OCS at Fort Benning, the next stop was Vietnam. He led the 9th Division providing security for the Mekong Delta. Later, he became company commander of Charlie Company 325 in the 82nd Airborne, where he had previously served as an enlisted man. He would then be given orders to return to Vietnam for his second tour.

Pender was pulled out of Vietnam to train for the Olympics in 1968 of which he would become part of the gold medal and world-record setting team in the 4 x 100 relay. He roomed with 200 meter bronze-medalist John Carlos, who lowered his head and raised a black-gloved fist, along with gold medalist Tommie Smith, during the national anthem as a protest against social injustice. As an active duty military personnel, Pender had been warned that he could not be part of any protests. Other track athletes had worn black tams to show subtle support. Pender asked Adidas for black track shoes with gold trim, which was a way of showing his support for the track team as well as the U.S. Army. 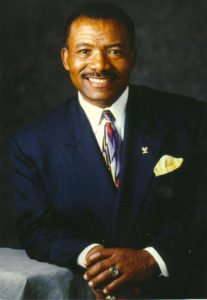 After a second tour in Vietnam, Pender was assigned to West Point as an assistant track coach. He was the only faculty member at West Point who did not have a college degree, so he quickly finished that at nearby Adelphi University. He was also the only officer on staff who had advanced through OCS. The incumbent head coach died, and the athletes advocated that Pender be promoted. A superior told Pender that “West Point was not ready for a black head coach,” and they hired a white head coach. That head coach did not stay long. During the next search, West Point extended an offer to Pender, but he was no longer available. West Point hired Ron Basil, their first African American head coach. West Point’s athletes and colleagues would however note Pender as their great motivator and friend.

Pender retired from the army and moved back to Atlanta, where he applied his leadership, motivational, and entrepreneurial skills. He opened an Athletic Attic store in South DeKalb Mall, and he later designed track shoes for Mitre, which they named Mexico, in honor of his Olympic gold medal venue.

Pender gave back to his community by implementing and coaching a track team for girls. The National Football Players Association then hired him to organize summer youth development camps. This led to an opportunity as regional director of Job Corps. Eventually, the Atlanta Hawks hired him as president of their foundation and director of community affairs.

He continues to speak and consult along with his wife, the Reverend Debbie Pender. His life has seen many challenges, particularly emerging out of racial injustice, but his faith and hope have kept him going, assured that “dreams can come true.” He has been inducted into halls of fame for sports, military service, and community affairs.

On November 5, the Georgia Institute of Aging and Leading Age Georgia will present Pender with a 2017 Positive Aging Icon Image Award during a gala at the Atlanta History Center.