Two of Atlanta’s top professional golfers will end the 2011 season by starring in atypical competitions this weekend.

You’ve probably heard of Matt Kuchar, who will tee off Thursday at East Lake Golf Club in the Tour Championship.

Kuchar, who lived in Brookhaven before moving to St. Simons a year ago and starred as an amateur while attending Georgia Tech, knows his scores at East Lake will also count toward the FedEx Cup – the PGA Tour’s prize for season-ending points playoffs.

Meanwhile, across the Atlantic Ocean, Rosie Jones of Sandy Springs will be leading the best American female pro golfers into the Solheim Cup against all-stars from Europe. This team match play (modeled after the men’s Ryder Cup) will take place at Killeen Castle in Ireland starting Friday.

Jones, 51, is one of my favorite athletes. She is fiery, insightful, and fearless. She was a great player (No. 12 on the LPGA career earnings list with $8.4 million). Today she runs a successful golf travel business. See rosiejones.com.

She came out in 2004, taking a risk in what today remains a conservative sport. 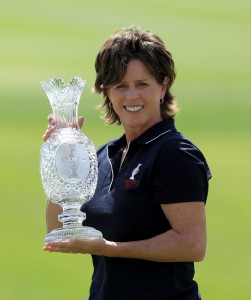 Rosie Jones and the 2011 Solheim Cup. The Solheim Cup is a biennial team match play event between the best women professional golfers. Jones will captain this year's American team, which will play the team from Great Britain and Ireland. (Photos courtesy of Rosie Jones)

Before she left for Ireland, we chatted about her captainship. She talked about breaking barriers, both personal and in golf, the LPGA possibly returning to Atlanta and the challenges of molding the stars of an intensely individual sport into a team.

Did you do anything different to get your team ready?

Rosie: Before the team was finalized, we looked for an American course that would pose similar terrain and difficulty to the one in Ireland where we will play. We took the top 16 players on the qualifying points list up to Pine Valley in New Jersey, a course with no women members that has traditionally only allowed women to play on Sunday afternoon. Jack Nicklaus showed up there once and his wife Barbara was not allowed anywhere near there.

With connections through my assistant captain Sherri Steinhauer, we became the first women to stay on site. We had several meals in the clubhouse and we stayed at the lodge, and we played on Monday morning. It was exciting. We did break barriers for that night, although I’m not sure it’ll go any further than that.

How do you coach a team of individual superstars? The Solheim Cup is known for high emotion, too.

Rosie: What happens in a team event like this, and I have to warn my players against this, is that there’s so much energy and excitement going on than when you are at a normal tournament on your own. They’re usually on their own plan and schedule. But this week, they’re eating and traveling and practicing together, and their captain is giving them this huge schedule. They’re running in this pack for a week. I find that after about three days, you have to be careful. These talented professional athletes need some alone time. They need to get little pockets of time to be calm and quiet. Hopefully I will be able to recognize [this need] before any meltdowns or anything. I think that’s the fun part about it, to recognize the appropriate times for energy and not so much at other times. The fun part of being captain is to balance that, and most of the players say it’s the funnest, most exciting week of their lives.

Will we see the Rosie who gets really fired up?

Rosie: I want to be passionate and I know my players are ready and excited. All I can do is put the experience I’ve had in my last 20 years into the way I am out there for them. They are the ones who have to go out and play, and the best I can do is be supportive and positive.

What’s your favorite memory from the seven times you played on the Solheim team?

Rosie: In 1996 in Wales, we were so far behind, we had to win nine out of the last 12 matches to overtake Europe and we did it. That was one of the most amazing comebacks ever. And in 2005, the last Solheim Cup I played in, I was paired with Meg Mallon. I made a 45-foot putt to tie the last match on the first day. If I had not made it, we would have gone into the final day behind. It was a huge motivational putt, and you dream of making putts like that as a kid. 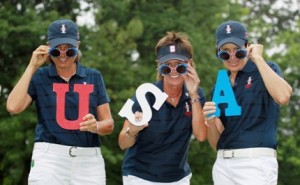 You took a risk by coming out near the end of your playing career. How has that decision played out for you?

Rosie: You know, basically my main identity has been as a pro golfer for over 30 years. Almost that entire time, I was gay and not out. In 2004, I decided to come out and part of that decision was my affiliation with Olivia, a travel company. I am not connected in a contractual way with Olivia now, and I’ve moved on to start my own business with golf vacations, and that’s kept me busy. And you know what? It was a perfect transformation for me ¬– coming out – because I do live a more open existence from that experience. I think the LPGA Tour and sponsorships out there are hopefully less critical and selective. I’ve had a totally positive experience with coming out. I have great relationship with the LPGA, and it’s been a really rewarding decision.

Do you think the different menu at the end of the season — PGA Tour playoffs and the Solheim Cup – is important for golf?

Rosie: I do. It’s a big dimension for fans and their level of interest in watching, especially after the majors are over. There’s some tradition going forward and always some new goal for the players and fans and that’s great. It adds more to the flavor of watching golf.

Will the LPGA Tour return to Atlanta?

Rosie: We’d sure like them to, wouldn’t we? Golf’s a tough racket here. There are so many other sports grabbing the corporate dollar here. It’s tough for the men and women pros. Eagles Landing [Golf Club in Stockbridge] is trying to bring the LPGA back. It would be great to get a women’s senior event back in Atlanta. Atlanta is an awesome place for women’s golf. I know that there’s a lot of fans here, and a lot of great golf companies.

Tell me about your favorite place to eat in Atlanta.

Rosie: I have to go to Taqueria del Sol once a week for fish tacos. I’m from New Mexico, and I love the charro beans and cole slaw. I had been going there two years before I met the owner, Mike Klank. We are members at Ansley’s Settindown course. We have a connection back in New Mexico, too. It’s been a fun relationship.