Lee May, 73, taught us lessons of life – whether it be from news or the garden

Journalist Lee May was one of those rare human beings who was universally loved.

Whenever anyone talked about Lee May, a warm glow and a smile inevitably followed. He was an old soul with a kind heart and a contagious spirit of good will.

So it was with great sadness when I learned on Tuesday from his equally amazing partner in life – Lyn May, that he was at home under hospice care just two months after being diagnosed with cancer. One day later, on Dec. 3, he passed away.

Oh Lee May – a man of the earth who covered some of the hardest-hitting news stories of his day – and then spent his later years writing about and indulging in his passion of gardening. A metaphor of life and death.

In his book – Gardening Life, Lee May wrote poetically about discovering his art:

I began seeing that all the lessons of life grow in the garden — everything from birth to growth, nurturing, love, passion, and sometimes heartbreak. As a writer, I saw a wonderful challenge and opportunity: Tell those lessons, and others, through gardening — mine and others’. Focusing on these life stories, I hoped, would make my writing accessible to gardeners and non-gardeners alike. 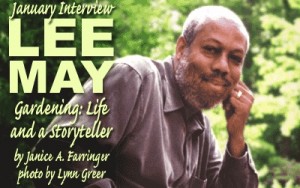 Lee May in January magazine 1999

Lee May and I worked together at the Atlanta Journal-Constitution – a place where he was idolized, respected and loved by his peers.

An obit prepared by Lyn May said he had spent 25 years as journalist working for the Atlanta Journal-Constitution and the Los Angeles Times.

During his tenure with the L.A. Times, he wrote on a variety of issues including immigration and economics, and he covered the White House during the Reagan administration. He moved from Washington, D.C. to become the Atlanta bureau chief for the L.A. Times in 1989.

As a news writer and editor for the Atlanta Journal-Constitution, Lyn May said she believes he was the first African-American editorial writer for the newspaper.

Later he became the food and gardening columnist who was featured in the newspaper’s Sunday Home & Gardens section. Lyn and Lee May – a special love

During his career, Lee May also was a senior contributing editor for Southern Living and an essayist for US Airways’ in-flight magazine – Attaché, as well as numerous home and garden publications.

Born on April 15, 1941, Lee May was a graduate of the Columbia University Graduate School of Journalism. He won countless awards during the span of his life, including the National Conference of Christians and Jews’ Gold Medal Award and the Robert F. Kennedy Journalism Award Grand Prize. In addition to writing Gardening Life, Lee May also was the author of the book – My Father’s Garden.

Lee and Lyn May were fortunate to find each other in mid-life after previous marriages joining forces in 1985.

Lyn – whose formative career was as a television journalist, was communications director for the 1996 Olympic Games and executive director of the Georgia Campaign of Adolescent Pregnancy Prevention (the nonprofit started by Jane Fonda).

My colleague, Lyle Harris, who called me Thursday to tell me Lee had passed away, spoke of how Lee and Lyn May were such a special union of two incredible individuals.

“I always wanted to be them when I grew up,” Lyle said. I knew exactly how he felt.

When I spoke to Lyn on Thursday afternoon, she coyly admitted their love had continued to the end. She would tell him stories, how Mayor Marion Barry had died – sharing a cynical comment that comes easily to journalists. She heard some groans from Lee. “Are you laughing,” she asked. He nodded his head.

Another moment she shared – on the day he died, Lyn leaned over and kissed him – telling him she loved him – and that’s when he took his last breath.

One of my great regrets is that I had not seen Lee in years. Lee and Lyn recently had moved back to Georgia after spending years in Connecticut. And I had no idea he had cancer (he had survived Hepatitis C for more than a decade).

At least I had the good sense to suggest that Lee May would be a good person to interview for the Atlanta Press Club’s Hall of Fame video on the induction of Celestine Sibley.

Lyn told me that taping the APC-Celestine video was one of his last outings before he got so sick. So if you click on this link, you can see a four-minute video that honors both Celestine Sibley and features Lee May – a woman and man for the ages.

The two had a similar spirit – a love of nature and people mixed in with a bit of mischief – the good kind.

Lyn sent me a photo of Lee she said I could post – it was one that made her both laugh and cry because it captured the sweet devilish spirit that was one of his charms. Lee May with a devilish smile

I also combed facebook and found some other lovely pictures that really show both the inner and outer beauty of Lyn and Lee.

In an email to friends, Lyn thanked them for helping “honor the divine Eddie Lee.”

“Please know that he was as good in his private life as he was publicly and professionally. I will miss him every day,” she wrote. “I didn’t say anything here about funerals because we aren’t having one.  He’ll be cremated in the next few days and there will be a celebration of his life in February in Roswell and one in Connecticut in April.”

I want to end this ode to Lee May with his own words – taken from an article written by Janice Farringer in September 1999 for the magazine called: January.

She commented to him that he spoke publicly about his feelings as easily as he wrote about them. Was he always able to be so verbal and open with his feelings?

“I was not always so open,” Lee answered. “Aging is a freeing process; it teaches me that revealing feelings can be instructive to others, entertaining sometimes — rather than dangerous, which is what I thought as a younger man.

A caveat: There is a danger in revealing too much. Some things a reader just doesn’t need — or want — to know. Certain revelations can embarrass both the reader and the writer. So, the writer has to know when to stop… revealing.” Previous Article
Tyler Perry-Fort McPherson deal may not be dead, but it is “on the rocks”
Next Article
Column: Atlanta will host ‘pre-summit’ on health, quality of life in May