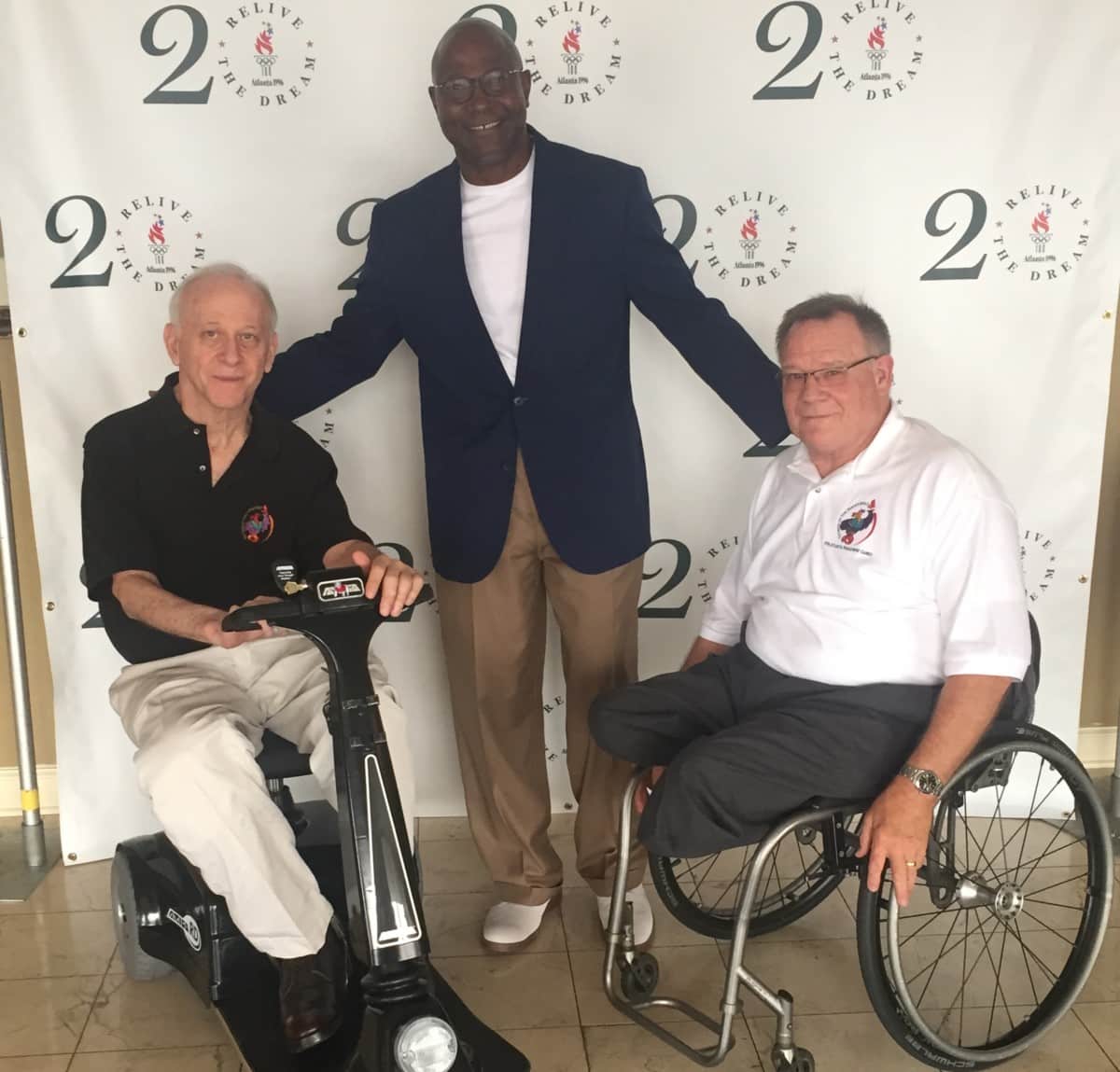 Twenty years ago Aug 15, the opening ceremony of the 1996 Atlanta Paralympic Games left a lasting impression as Mark Wellman, a paraplegic, pulled himself up 40 feet up a rope, using only his hands, while a flaming Olympic torch was tucked between his legs before he dramatically lit the Olympic caldron.

The Paralympic Games in Atlanta were a turning point for both the Olympic movement and for Georgia becoming a leading center for people with disabilities. 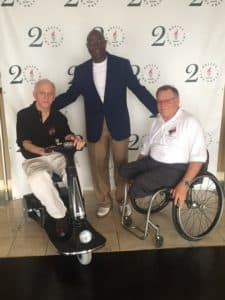 Before 1996, the Paralympics “were kind of an after-thought,” according to James Shepherd, co-founder and chairman of the Shepherd Center, one of the nation’s largest hospitals for people suffering from a game-changing disability.

The Center was founded after James Shepherd graduated from the University of Georgia and was on an international trip. He was only 22, and he had been body surfing off a Brazilian beach of Rio de Janeiro, when a strong wave knocked him to the ocean floor – causing a traumatic spinal cord injury and paralyzing him from the neck down.

Because there were limited rehabilitation centers for spinal chord injuries in the South, James and his parents – Alana and Harold Shepherd – decided they would build a center in Atlanta. Two years later, in 1975, the Shepherd Center opened.

Alana Shepherd was just getting started. She was determined to make sure society welcomed people with disabilities and respected them for their abilities. 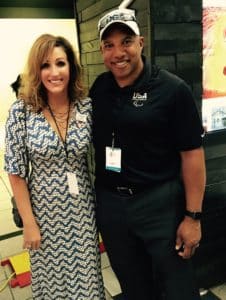 Cynthia Frisinia of BlazeSports with John Register, a former Paralympian who is the U.S. Paralympic Director of Community Development (Photo: Courtesy of BlazeSports)

Up until 1996, the Olympics and the Paralympics were always divided. But Alana Shepherd had another plan in mind.

At an Olympic venue in Barcelona during the 1992 Olympics, Alana Shepherd was sitting next to Juan Antonio Samaranch, president of the International Olympic Committee.

“Samaranch agreed that from that moment on, the Olympics and the Paralympics would be wed,” James Shepherd said in a phone interview on the 20th anniversary of the Atlanta Paralympics. “Atlanta was the first city to host the full Olympic Games.

Before that, they were always kind of divided.”

Atlanta, however, had a special challenge because the Paralympics had no formal relationship with the Atlanta Committee for the Olympic Games. It had to raise its own money to help host the Paralympics, yet it initially was limited to only asking existing Olympic sponsors for funding.

Despite that hurdle, the Paralympic Games raised $84 million in cash and inkind contributions, ending up with a $4.5 million surplus – enough money to create a legacy organization – the U.S. Disabled Athletes Fund.

At the time, Andy Fleming, who served as president of the Atlanta Paralympic Organizing Committee, said: “Our mission was to stage the most successful Paralympics in history and leave a legacy for the movement. I want to make Atlanta and Georgia the very best place in the world for young people with a disability and an interest in sports.” 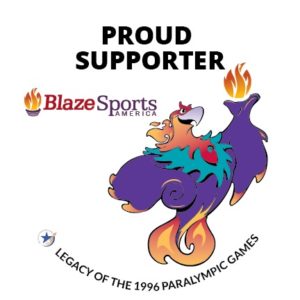 Logo of BlazeSports, which uses mascot of 1996 Paralympic Games

The U.S. Disabled Athletes Fund eventually became Atlanta-based BlazeSports America, a nonprofit built on a foundation of Paralympic ideals – helping cultivate grass roots support, training and education, advocacy and opportunities for those with physical disabilities to be engaged in organized sports.

“In light of the Paralympics being held in Atlanta 20 years ago, Georgia is at the forefront nationally in providing adaptive sports opportunities for people with physical disabilities,” said Cynthia Frisina, executive director of BlazeSports.

The logo of the organization features “Blaze” – the official mascot of the 1996 Paralympic Games. “We use this mascot today, and it is why we are named BlazeSports America,” Frisina added.

BlazeSports has a “legacy white paper” on how the 1996 Paralympic Games changed the landscape.

A sold-out Olympic Stadium with 65,000 people attended the opening ceremony, watching 3,310 athletes with physical disabilities from 104 nations, were welcomed to Atlanta for the 10th Paralympic Games.

By the end of the two weeks of competition, 268 world records had been set, hundreds of thousands of tickets had been sold and viewing of the Games exceeded 50 million.

“Since the 1996 Paralympic Games, Georgia has blazed the way advancing opportunities for people with physical disabilities to participate in sports in both  community-based and school settings,” the white paper stated.

“Georgia is among the top three states advocating for people with disabilities,” Frisina said. “We will have athletes competing in the Rio Olympics. There are four from Georgia.”

The 2016 Rio Paralympics will be held from Sept. 7 to Sept. 18. It will be the first time since Atlanta that there will be significant live TV coverage of the Paralympics, with NBC announcing it will air 66 hours during the Games.

But like his mother, James Shepherd believes more could be done to promote the Paralympics.

In fact, at the 20th anniversary Olympics celebration at Centennial Olympic Park, James Shepherd told Scott Blackmun, CEO of the U.S. Olympic Committee, that the Paralympics should be held before the Olympic Games as a way of building up to the event rather than held afterwards when venues are suffering from Olympic fatigue.

While Blackmun seemed to appreciate the idea, he told Shepherd: “We are still trying to live up to all the things that Samaranch promised your mother.”

No matter what, Atlanta’s Paralympics legacy lives on. 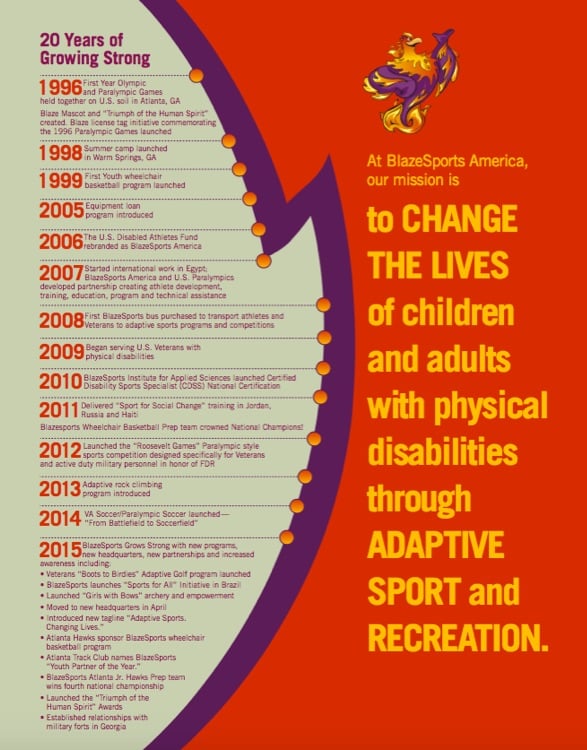