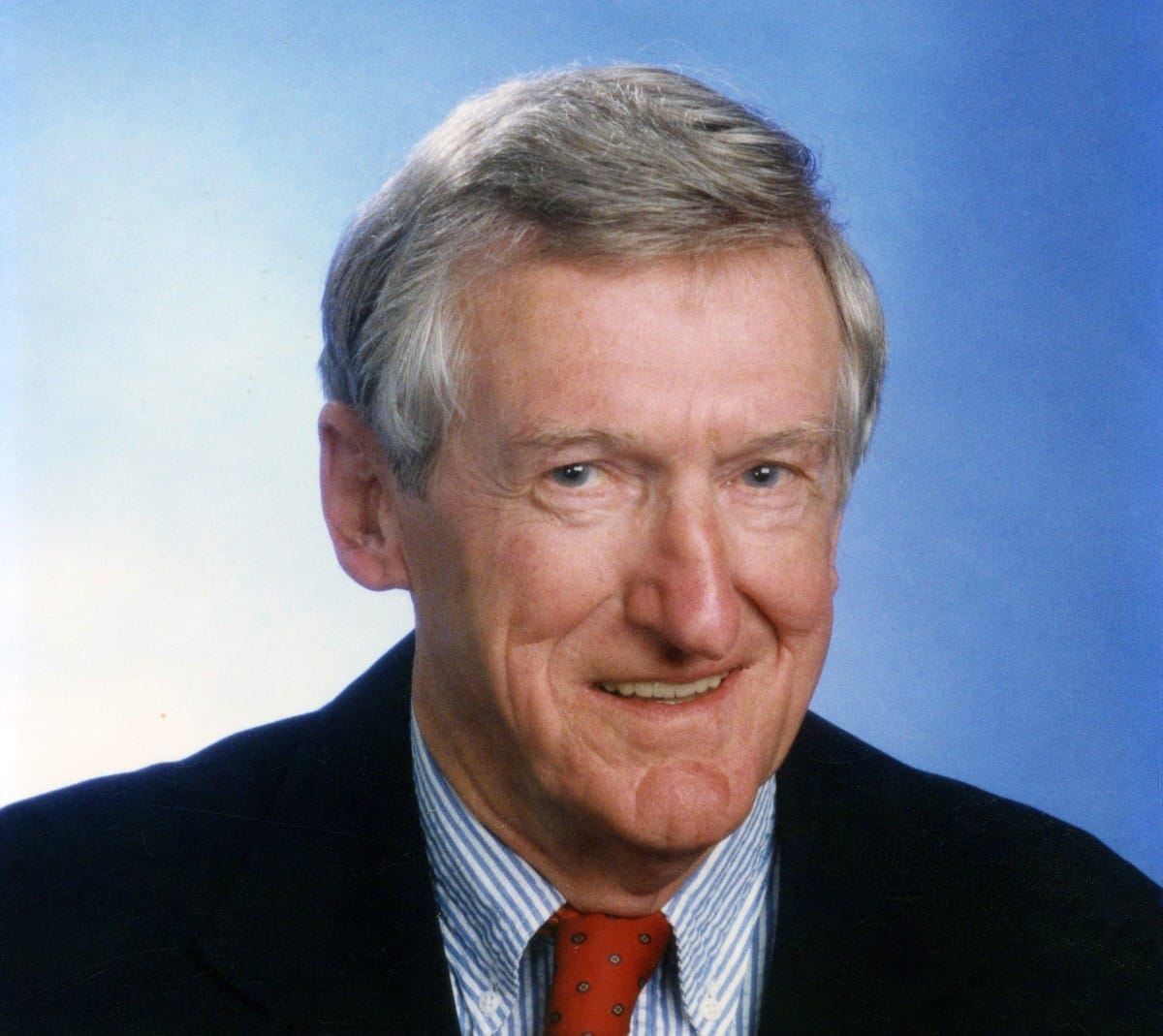 One of the quiet heroes of the Civil Rights movement – Dr. Leslie W. Dunbar – passed away Jan. 4, just three weeks shy of his 96th birthday.

Dunbar, a political science professor at Emory University professor until 1951, when he joined the Atomic Energy Commission as chief of community affairs.

But he returned to Atlanta in 1958 to join the Southern Regional Council, becoming its executive director in 1961 through 1965. He recounted his days the SRC in an interview for the Southern Oral History Program. 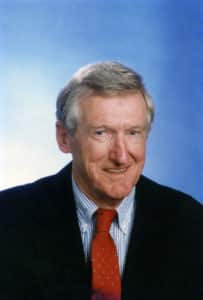 “My father liked a Atlanta a lot,” said Tony Dunbar, his son who was born when his dad was teaching at Emory. “I especially remember when we moved back to Atlanta in the 1950s…. Atlanta had a lot of community-minded people engaged in a common love and dangerous mission.”

That dangerous mission was working to create an integrated society where everyone had equal rights and the unfettered ability to vote and participate in life.

Dunbar left Atlanta to become head of the Field Foundation in New York City, and he was able to continue to support grassroots organizations working on civil rights, voter registration and education as well as numerous other initiatives.

“There were lots of genuine white Southerners who didn’t like the racial climate in the South,” said Andrew Young, of Dunbar. At the time, Young was working in the movement alongside Martin Luther King Jr. Later Young and King visited the Field Foundation seeking funding for a voter registration program.

“I remember he was always with us – not matter what we did,” Young said of Dunbar. “But he never raised his voice or showed any sign of emotion. He was compassionate towards us. He was compassionate and confrontational at the same time – without being hostile to people who were racist. He rationalized everything. He would calmly explain the complexities of something.”

It was his personal style, which Young described as being similar to the character Atticus Finch in To Kill a Mockingbird, that made Dunbar close personal friends with Atlanta Constitution columnist Ralph McGill and young civil rights attorney Vernon Jordan. 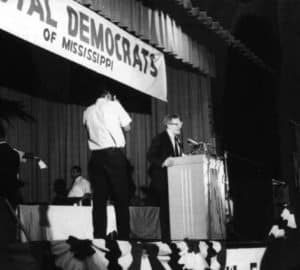 Les Dunbar speaking to the Loyal Democrats of Mississippi Convention in 1968 (Source: a book with friends reflecting on Dunbar’s life)

“He was an amazing man,” said Connie Curry, a civil rights leader who moved to Atlanta in 1960. “Les Dunbar was just really helpful, giving me materials and helping get my office set up. He was always there for us. He was there to support people.”

As an example, Curry remembered getting threatening calls from members of the Ku Klux Klan. “He would calm me down,” she said. “He was so important to Atlanta’s young people in the Civil Rights movement.”

And those relationships continued after Les Dunbar left Atlanta.

When John Lewis had a falling out with the Student Nonviolent Coordinating Committee, Dunbar offered him a job with the Field Foundation in New York City.

“Les was a political scientist with a tremendous interest in race relations, just a good, decent human being,” Lewis wrote in his book Walking with the Wind (1998). “He had been head of the Southern Regional Council, and he was well aware of me and the work I’d done with SNCC. He said he might have something for me to do in New York if I was willing to leave the South.”

Lewis recounted that the Field Foundation’s staff was small – just five people including him and Dunbar.

“On one occasion, Andy Young and Dr. King came by to talk about an SCLC citizenship education program. It felt odd, to say the least, to be facing them across a table and hearing them describe what they needed to me and to Les. I never imagined I’d be in a situation like that. It was just another sign of how much times were changing for all of us.” 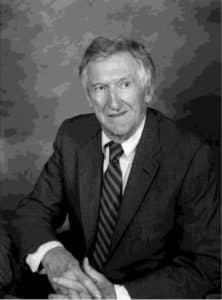 A black and white photographic portrait of Les Dunbar

It was in that role that Dunbar helped get the Field Foundation to provide substantial support King’s Poor People’s Campaign. Dunbar also was instrumental in providing financial sustenance to the fledgling Children’s Defense Fund under the direction of Marian Wright Edelman.

Curry said Dunbar preferred to be an associate rather than a leader seeking the limelight. He seemed to prefer being among the people – looking for ways he could help strengthen the causes in which he believed.

Here is a more complete obituary of Leslie Dunbar provided by his son, Tony Dunbar, who is a writer living in New Orleans.

Dr. Leslie W. Dunbar passed away peacefully in New Orleans on January 4, 2017, three weeks shy of his 96th birthday. Dr. Dunbar was the youngest of ten siblings – and a native of Greenbrier County, West Virginia.   His family was an early victim of the Great Depression and left the Greenbrier Valley for Baltimore, where he met his future wife, Peggy Rawls.  He attended the University of Maryland until World War II began when he left the University to supervise the assembly of B-26 bombers at the Glenn L. Martin aircraft plant.  His clandestine  (so they thought) marriage to Peggy, a nursing student, was reported in a Baltimore paper and caused her expulsion according to the rules of her school. After the war, and without a college degree, he was admitted to Cornell University where with a young baby he earned a Ph.D. in political philosophy and Constitutional law.

He went on to teach political science at Emory University. In 1951 he moved to the Atomic Energy Commission as Chief of Community Affairs  – overseeing the sudden arrival of workers and scientists in Aiken, South Carolina, as the AEC’s immense Savannah River Plant was brought online. He returned to academia to teach at Mount Holyoke in Massachusetts, where he chaired the political science department.

But, in 1958, he answered his true calling, motivated by what he called “Southern-born common sense,” and retuned to Atlanta to join the staff of the Southern Regional Council. “It was a time of mind-changing in the South,” he said, “and SRC was central to that.” He was with the Atlanta-based Southern Regional Council during the tumultuous days of the civil rights movement, as its director of research (1958 to 1960) and its Executive Director (1961 to 1965). He was a passionate voice for acknowledging and following the black leadership of the southern struggle. With Southern Christian Leadership Conference’s Martin Luther King Jr. and the NAACP’s Roy Wilkins, he helped to create the Voter Education Project; using the funds of the SRC to sponsor it. He hired Wiley A. Branton and later, Vernon E.  Jordan, Jr., to direct the Project which is credited with registering two million African American voters in the 1960’s.   Dr. Dunbar was a guest at the signing of the Voting Rights Act at the White House in 1965.

Also in 1965, Dr. Dunbar moved with his family to New York to direct the Field Foundation, a philanthropy founded by the Chicago department store family and dedicated to child welfare and civil rights. In that role, and until 1980, he championed (and funded) many causes critical to the enduring Civil Rights struggle. These included major financial support to maintain the existence of the Friends of the Children Head Start program in Mississippi in the face of state efforts to eradicate the program. He steered Field Foundation funds to provide substantial, probably primary, support for Martin Luther King’s Poor People’s Campaign, which continued through organizational difficulties after Dr. King’s assassination.  He was instrumental in providing financial sustenance to the fledgling Children’s Defense Fund under the direction of Marian Wright Edelman, and he was an early supporter of Cesar Chavez’s United Farm Workers’ Association, and of La Raza, a leading Latino advocacy organization.

At the time of his passing, Ms. Edelman said, “He has made such a difference in my life and so many others. I still gain strength thinking about his creative philanthropy and persevering friendship and support. There would unlikely be a Children’s Defense Fund without his investing in the seeds of the  Washington  Research Project that sprung from the Poor People’s Campaign and evolved into CDF. He enabled all of these. His risk taking and creative and long term investment philanthropy is unmatched today. So many of the anti-hunger and anti-poverty fighters today are his children.”

Dr. Dunbar was an early and passionate objector to the War in Vietnam – leading to his being escorted by the Capitol police, in a dignified way, from a sit-in at the House of Representatives protesting funding for the War.

He was a “scholar-at-large” with the United Negro College Fund in 1984-1985, and taught at Xavier University in New Orleans. His working career concluded at the Ford Foundation, where he published, Minority Rights, What Has Happened to Blacks, Hispanics, American Indians & Other Minorities in the Eighties. This was one of several books he wrote, one of the last being Looking for the Future, A Meditation on Political Choice, a commentary on American militarism and democracy published in 2012 when he was 91.

“Retiring” to Durham, North Carolina, and well into his seventies, Leslie became a volunteer in the “guardian ad litem,” or CASA, program and narrowly lost a campaign for election to the Durham School Board. He became active in the social justice ministry of the Watts Street Baptist Church, and in 1992, along with its pastor Rev. Mel Williams, founded the Religious Coalition for a Nonviolent Durham. Throughout his adult life he maintained a commitment to dozens of grassroots civil rights, labor, and political groups.

Dr. Dunbar’s wife, Peggy Rawls Dunbar of Baltimore, Maryland, his daughter Linda Kravitz Knox, and foster son Van Nha, pre-deceased him. So did his brothers and sisters. He is survived in New Orleans by his son, Tony Dunbar with partner Nancy J. Shoemaker, and by his grandson Samuel Rawls Price Dunbar; by his granddaughter Rachel Kravitz of Bethesda, Maryland; his son-in-law Hugh Knox; and his “adopted” Knox grandchildren Kate and Tim and Rebecca and her husband George Rice.

Previous Article
Column: Task Force for Global Health takes No. 2 spot on Forbes charities list
Next Article
Rockspinner public artwork to depart Midtown, successor to be in place in May