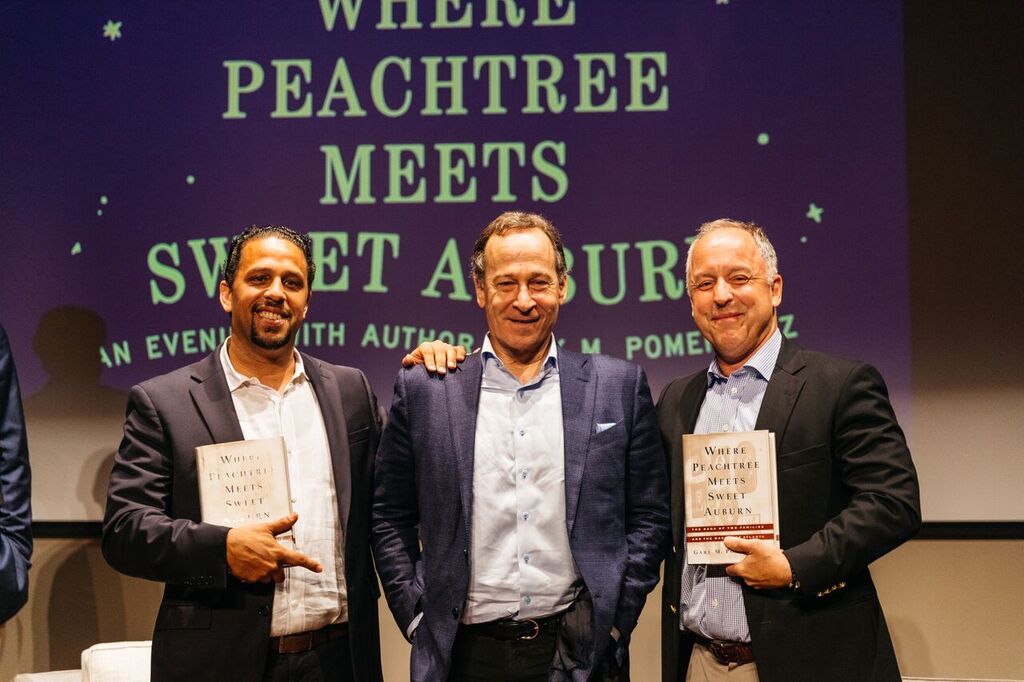 Before leaving office, Atlanta Mayor Kasim Reed announced in late November that a statue of boxer Evander Holyfield would be placed near Woodruff Park at Peachtree and Auburn Avenue.

With all due respect to Holyfield, Woodruff Park is the wrong spot to honor the boxer, who fought Bert Cooper on Nov. 21, 1991 at the now demolished Omni Coliseum – the site of Philips Arena.

The corner of Peachtree Street and Auburn Avenue, however, is the perfect place to honor two Atlanta mayors – Ivan Allen Jr. and Maynard Jackson. 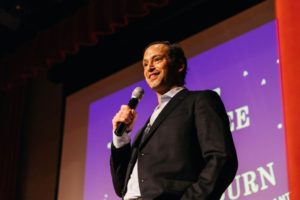 The idea really was reinforced last week when Gene Kansas invited Gary Pomerance, the author of “Where Peachtree Meets Sweet Auburn,” to speak at the Auburn Avenue library. Kansas, who has restored two historic buildings on Auburn Avenue, hosted the evening presentation on May 31 to mark the next day’s opening of Constellations, a shared work space that he hopes will be a gravitational force for the Atlanta community.

During his talk, Pomerantz articulated the significance of both Atlanta mayors on the arc of history. His book was published in May 1996, on the eve of Atlanta hosting the Summer Olympic Games.

Over the past two decades, the book has emerged as one of the best historical descriptions of Atlanta – weaving the family histories of both mayors in a way that tells the story of our city. In fact, Auburn Avenue Films, founded by Maynard “Buzzy” Jackson III (the late mayor’s oldest son), has optioned the movie rights of the book.

For years, I have envisioned two statues – one of Mayor Allen and the other of Mayor Jackson – shaking hands or conversing – at the corner of Peachtree and Sweet Auburn. A historical marker could help explain the significance of that intersection and how both men helped shape Atlanta of today.

Pomerantz did an excellent job during his talk explaining why we must remember, and I’m sharing excerpts from his talk so readers can understand why we need to memorialize both men at that intersection.

Once upon a time, in the days of segregation, there was a powerful sense of community and hope on Auburn Avenue.
At that time, there were two Atlantas – black Atlanta and white Atlanta.
Auburn was the commercial and spiritual hub of black Atlanta. There was a certain magic there…
Money made Auburn sweet.

Pomerantz spent more than five years “chronicling the lives of twoAtlanta mayors, Ivan Allen and Maynard Jackson, and their families – the Allens and the Dobbses – the Dobbses being Maynard Jackson’s maternal line.” The story of the two families was the basis of the book.

Ivan Allen Jr. was the human bridge from the old South to the new in Atlanta – and when he got to the distant shore, there stood Maynard Jackson waiting to take the city into modern times.
In the stories of these two men and their families, I found a narrative of Atlanta and its historic rise from the ashes of the Civil War.
Atlanta is a city built on black hope and white pragmatism.
It began on that course at the end of the Civil War when freed slaves and broken Confederates poured into the city to seek a fresh start.
Over the arc of time, Atlanta’s character was best revealed in answer to the question: How can African-Americans truly be free within a white Southern society?
It’s a moral question that Atlanta answered, not with morality, but with pragmatism. The answer was a truce between white and black leaders. If not a full and just peace, the truce would become at least a fruitful cessation of hostilities.
It did not eliminate the prejudice of the white southerner – it only kept it out of view. It did not guarantee blacks a better life – it made such a life seem possible.
Though African Americans and whites gained from such a truce, the gains were small during the 20thcentury in terms of tolerance and understanding.
There were gains of profit in business and politics. Whatever trickled down from that profit, in terms of human relations, was a bonus.
Maynard Jackson and Ivan Allen personified black hope and white pragmatism. They – and their families – personified Peachtree and Sweet Auburn, the yellow brick roads for dreamers in the South.

The book provides a wonderful window on how Atlanta was able to become a beacon for the South – a city that pivoted from segregation to integration without the violence and resistence seen in other Southern cities. Much of the credit belongs to both Allen and Jackson.

Ivan Allen Jr. and Maynard Jackson were so different and yet so much alike.
They were of different generations. They hailed from different sides of town. One was a Morehouse Man, the other a Georgia Tech man and Chamber of Commerce stalwart.
Both were chivalrous and courtly in their manner. To spend 15 minutes with them was to understand why they got elected. They were charmers.
They were also quintessential Atlantans from defining families. That either – or both – emerged to lead this city was no accident.

Pomerantz said it was important for Atlanta to remember both men and their contributions.

Î was pleased to see the Atlanta airport renamed to honor Maynard Jackson. I think it’s absolutely appropriate – and even more than that – essential for Jackson to be honored. He rates as one of the defining Atlantans of the 20thcentury.
I think it is also important that Atlanta does not forget Ivan Allen Jr.
He too is one of the defining Atlantans of the 20thcentury.
His deeds – the way he shaped the modern city – the way he saved Atlanta from itself during the 1960s – seems to have been lost in the collective memory. It seems to have been lost to time.
Let me put it this way: if Lester Maddox had defeated Allen in the 1961 mayor’s race, Atlanta would not have hosted the 1996 Olympics.

Pomerantz also described how Allen’s views towards race had evolved.

Consider this trajectory:
In 1957, Ivan Junior made a run for governor as a segregationist. He bowed out of the race quickly.
In 1963, only six years later, Allen became the only elected public official in the South to testify for President Kennedy’s Public Accommodations bill, a precursor to the 1964 Civil Rights Act.
Allen’s testimony before the Senate Commerce Committee stands as one of the greatest moments in the history of Atlanta mayors.
As the Rev. William Holmes Borders once told him: “Don’t worry Mr. Allen, we Negroes don’t like anybody better than a reconstructed Southern white man.”

Then Pomerantz, amazingly, shared his idea of how we need to remember both men – strikingly similar to what I have been advocating.

Ivan Allen and Maynard Jackson belong to history now.
They represent a higher ideal – one Atlanta.
They represent the possibility of harmony. As mayors, they did not achieve harmony in this town, but they certainly aspired to it.
In death, they embody the soaring idealism of Peachtree Street and Sweet Auburn Avenue.
Here is what I would like to see: A symbolic archway – we’ll call it the Harmony Arch – placed at the intersection of Peachtree and Auburn, an archway named for Ivan Allen and Maynard Jackson – two men who drew strength from the spirit of those two famous boulevards – and in turn gave some of their own strength and spirit back.

The event on May 31 marked the continued interrelationship between the Allen and Jackson families – with members of both families coming to the event, taking pictures and sharing stories.

Samara Minkin, manager of public art, for the City of Atlanta, did sound as though the city might consider an alternative site for the Evander Holyfield statue

“The City continues to work with partners to determine the best siting for the Evander Holyfield statue,” Minkin wrote in an email. “We will share updates as they develop.”

Now we just need someone – a company, foundation, government or individual – to commission statues of Allen and Jackson and place them in their rightful spot – at Peachtree and Sweet Auburn. 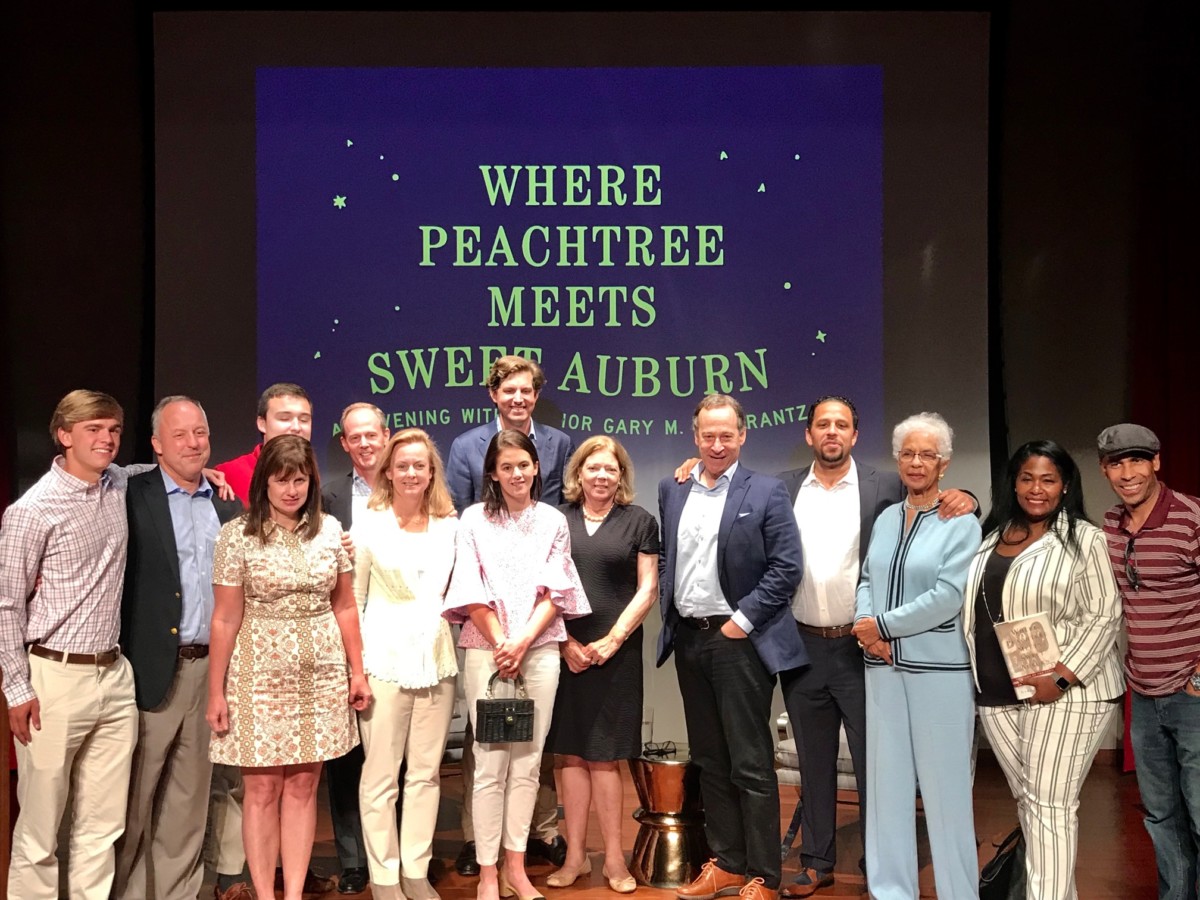 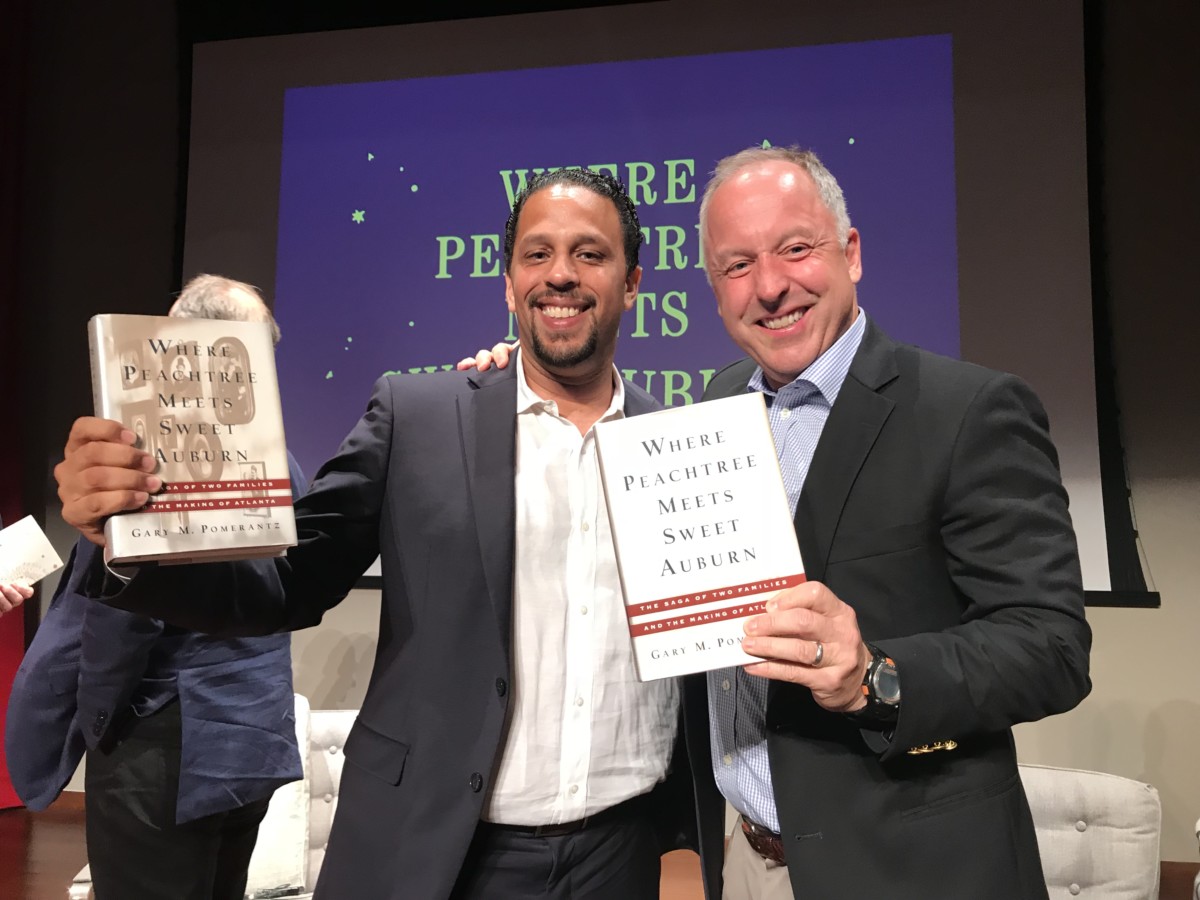 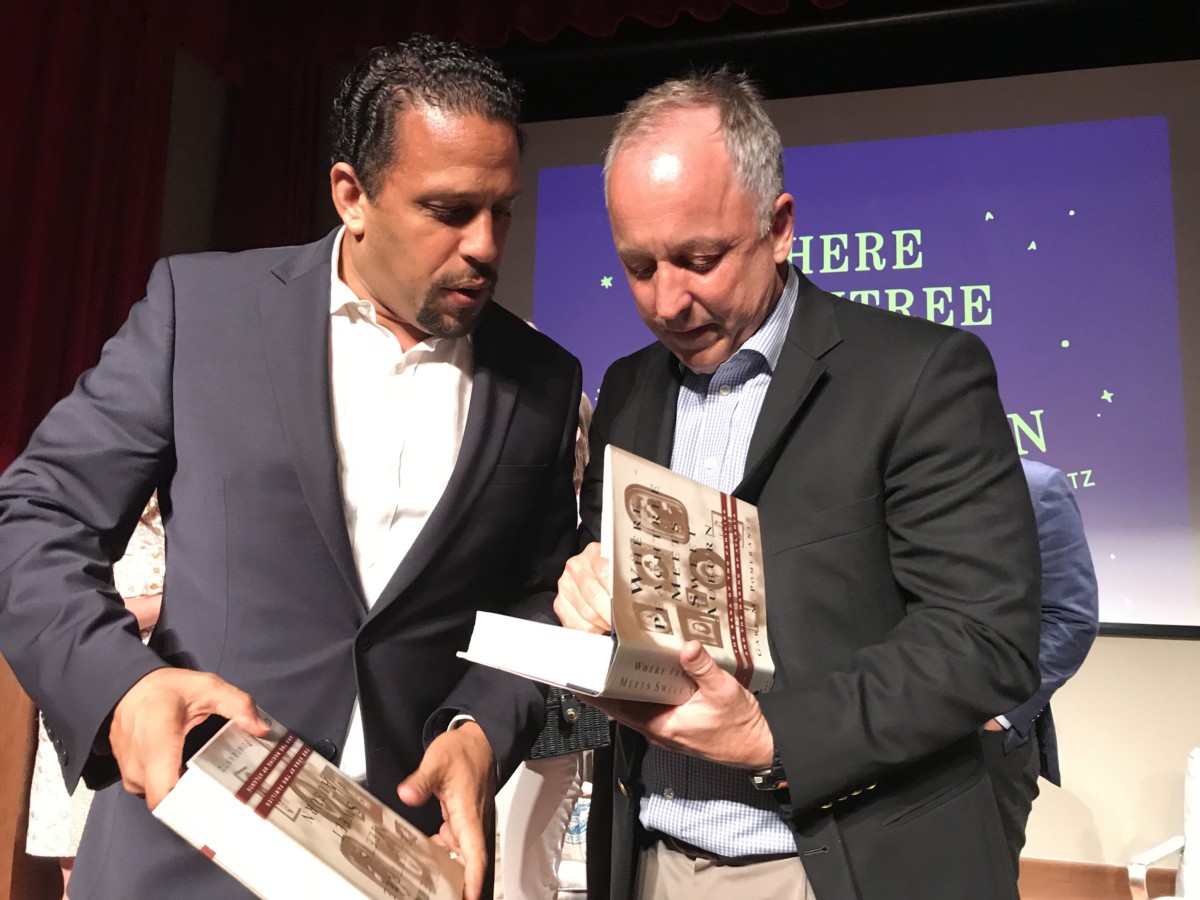 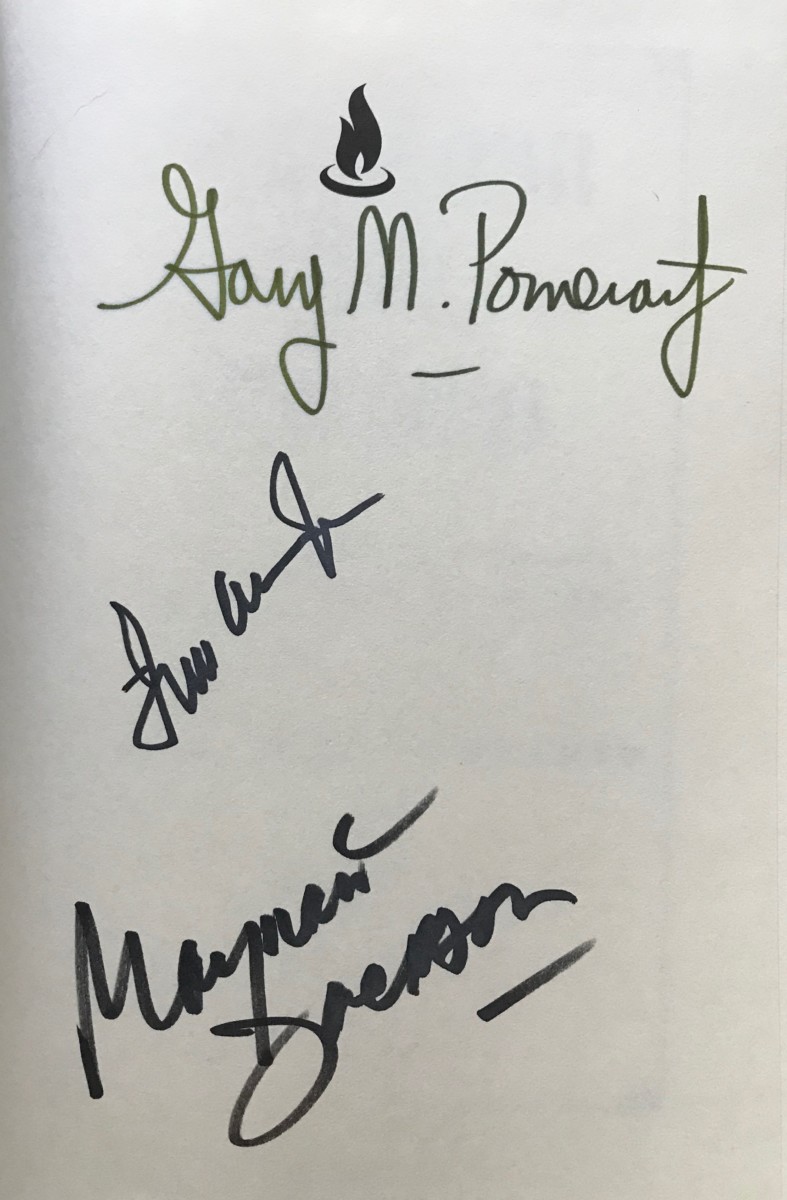 At the release of “Where Peachtree Meets Sweet Auburn,” we were each given a copy that included signatures from both mayors and Pomerantz. Here is a picture of my treasured copy (Photo by Maria Saporta)

Previous Article
Georgia wins a water lawsuit, contends federal foot-dragging is slowing progress
Next Article
Candidate tax returns show up in politics, but not in law