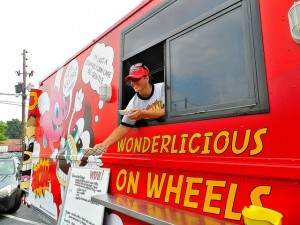 When Wendy Cross and her Wow! Food Truck roll into Suwanee’s town square Friday, she expects a super busy and profitable evening selling arepas, a type of Venezuelan sandwich so delicious that Wow! is often listed at the top of  Atlanta’s best food trucks. Suburban eaters show up ready to spend, passionate about delivery of freshly-made food and eager because the trucks usually stay intown.

Cross had a lot of passion and excitement in 2011 when she got out of real estate, bought one of the first food trucks in Atlanta and taught herself the grueling work of operating and marketing a mobile restaurant. Compared to selling property, this one was going to be fun. If it didn’t work out, she had her life savings to fall back on.

That’s when her food truck went from fun to fundamental to her survival. Where now, through the small sliding windows, she is rebuilding her belief in the goodness of others.

“I’m not as light anymore,” she admitted. “I don’t trust people like I once did. Something like this rocks everything you thought you knew, and you have to try to find the good in the world again.”

By law, food trucks must operate out of a restaurant or commercial kitchen, and Cross parks hers at a commissary in Roswell where her ingredients are stored. Four blocks away is where the Sandalwood Apartments once stood, where she grew up. There she vowed to work hard enough to not struggle like her family.

“I grew up on food stamps and got clothes and furniture from the Salvation Army,” said Cross, 48, who was young when her father, a British chef, left her jobless mother and three kids. “It was engrained in me from when I was very, very little that you have to save your money for the future. I always saved to a fault and didn’t splurge on normal things like other people would.”

She handled the stress with innate fearlessness (“I was never afraid of trying things”) and a personality she described as “goofy” and “happy go lucky.” She was close to her sister Juli and brother David, a comedian and actor known best for playing the character Tobias Funke on the TV show “Arrested Development.”

“ I have some weird memories of Roswell, with David and I being very young and hanging out,” Wendy Cross said recently, the same week she would set up the food truck on Roswell’s square. “A lot of David’s early comedy was about us growing up in Roswell.”

After attending Crestwood High School and Northside High School of Performing Arts, she ended up in real estate, making “really, really good money” and banking as much as she could.  When the economy started to tank in 2008, “I decided I wanted to follow a passion.”

She found it while visiting her brother in Manhattan’s East Village. They were discussing where to eat that “wouldn’t break the bank.” He mentioned arepas, but she misheard him.

“A rape bar?” she asked. “You go somewhere and pay to get raped in New York? That’s crazy.”

No, he explained. Ah-RAY-pas. In Venezuela, “the arepa is multipurpose as it is used as an appetizer, a side dish or a main dish,” according to the Venezuela Cooking Blog. “Arepas can be prepared for breakfast, brunch, lunch or dinner. The arepa varies in cooking technique, main ingredient, color and filling depending on the region of the country where it’s prepared.” 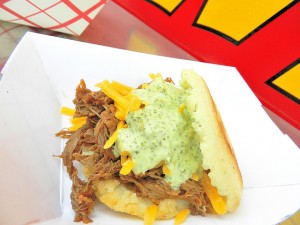 “Oh my God, this is the best food I’ve ever had,” she recalled saying. “When I came back to Atlanta, I’ve got to eat those again. They are really great.”

Only there were no arepas in Atlanta. “There was a place way up in Gwinnett, and theirs were terrible,” she said. “The mother of invention is necessity.”

She spent a year testing recipes on her friends’ taste buds until she pinpointed the mouth-watering flavor of a 20-hour smoked pork, 12-hour slow-cooked beef, and savory shrimp and chicken filling. She developed a signature Kicky Sauce, her answer to sriracha or ketchup.

They didn’t sell right away because no one knew what an arepa was. “We’ve got to dumb this down,” her business partner said. “Let’s call them Venezuelan sliders.” Once they caught on, she changed back to the real name.

Her business name—short for Wonderlicious On Wheels—didn’t start out that way. Right before the sign painter was to start, a blogger called her and said the name she wanted (OMG) was already claimed by another truck. She needed another three-letter word, pronto.

OMG turned into WOW, and those exclamations also fit for what happened next.

Cross, now 48, kept a close eye on her savings, which in 2012 amounted to about $400,000 and was growing steadily.  But there were things she didn’t know, like accessing the online database of financial advisors who have committed fraud. She had met her money manager through Bank of America. He worked with a man she knew as Lee. The two of them left BofA to go to another brokerage, and then started their own business.

Where they went, so did her savings, with her blessing. She trusted them.

“I was probably their favorite client, never taking a penny out of my account, always put money in and never bothering them,” she said.

One luxury was a boat on Lake Lanier, and in 2012 she was finally feeling secure enough financially to contact her advisor about buying a lake house. 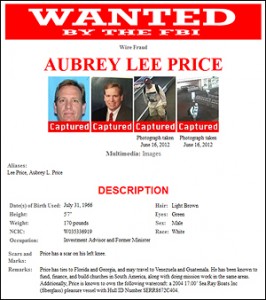 A few days went by, and the advisor didn’t reply.  “The shocking part was this was my advisor who I had dealt with for nine years,” she said. “A lot of trust was built up. There were some red flags in hindsight, but I just didn’t know, and I am not ashamed that I didn’t know.”

Lee turned out to be Aubrey Lee Price, who in June 2014 would plead guilty of bank, securities and wire fraud that involved a federally insured bank and dozens of investors. You might remember him as the guy who faked his own death. According to the FBI, part of Price’s scheme involved raising approximately $51 million from approximately 115 investors from across the country and unsuccessfully invested funds in various equity securities, options, and real estate, including (oddly enough) property in Venezuela. One of those 115 was Cross.

“I got the call on a Wednesday morning,” she recalled. “I just dropped down on my knees. Understanding that everything was gone took a few days to sink in … It was terrible to be brought back to the hole where I grew up.“

One of her main assets was her food truck, worth more than $40,000. If she sold it, she might be able to keep paying her mortgage. Instead, her brother offered financial help so she could keep her business. “He wasn’t just there financially,” she said. “He was a huge support.

The pressure to succeed became intense. It matched the inside of the food truck itself. On a hot August day facing the sun, with burners and griddles on, the temperature can hit 130 degrees.

“What was a passion project turned into something much more important after I found out I was completely broke,” she said. Wow’s arepas had to be “not just great. The business had to work. People will come once, but will they come again and again and again?” 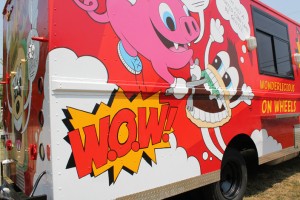 The truck was supposed to be named OMG, but that didn’t work out, either. (Credit: Wow! Food Truck)

“My taste buds are still trying to figure out what happened,” The first Yelp reviewer had written in 2011. “These small, stuffed corn cakes pack a punch. I actually had to go back for seconds… I started with the pork arepa and a donut. I inhaled both before I could even cross the street, so I came back for a chicken arepa and a donut. Yes, I had to get another donut…. Super nomz! Super cheap!”

Their attachment was underscored earlier this month when the truck had an accident on Ga. 400 and was shut down for a few days. “We’d love to help in any way that we can,” Jim Cortina posted on Facebook. “Atlanta needs arepas!”

Today there are around 100 food trucks in Atlanta but there is only one Wow! It survived partly because Cross saw it as her only way forward.

“I didn’t really have a choice but to get through it,” she said. “It was possible to go to that dark terrible place and give up, but I wasn’t going to do that. I had to find it in my family, my wife, and in the people I was around. I have to stay the course.”

Some of her close friends withdrew as if she had contracted a contagious disease. Rebounding from losing her life savings meant regaining some measure of faith in others.

Her business recovered (she estimates this year’s gross to be $450,000) and she is looking for an investor who wants to open a bricks-and-mortar areperia on Atlanta’s Westside. That kind of deal takes trust on both sides. Her customers have helped her believe again by choosing her truck, lining up and complimenting her food. Her life savings may be gone, but the life savoring is returning.

“It’s a work in progress… and those small moments, where someone is kind just to be kind, are restoring my ability to give back.”

Michelle Hiskey can be reached at michelle.hiskey@gmail.com.