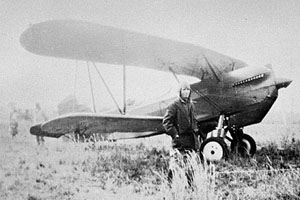 In 1923 a quiet and withdrawn 21-year-old college dropout rode his motorcycle from Florida to Sumter County, Georgia, just outside Americus. He had a dream to purchase a biplane, which were being sold in crates as surplus left over from World War I.

Charles Lindbergh stands beside an airplane on Sapelo Island, around 1929.

In 1917 the U.S. Army had purchased some land and constructed an aerodrome that became an aviation training detachment, dubbed Souther Field. The military left quickly after the Armistice, leaving an inventory of materiel that a man named John Wyche, of Macon, auctioned on weekends. The young motorcycle rider — Charles Lindbergh — learned of the auctions from a newspaper ad.

Charles Lindbergh was not new to the air: he had made pocket money as a wing-walker and parachutist at the aerial circuses that dotted the countryside of the Midwest. Now he wanted to learn to fly. After purchasing a boxed JN-4 Jenny with a few extras, he paid locals to put it together. Then he taught himself to fly it. Nearly penniless at this point, he slept under the stars and in the abandoned World War I-era hangars. Since the field was practically deserted by this time,  he had his run of the place with his beloved biplane.

Two or three weeks later, he flew off from the field into history, heading southwest in time for the barnstorming  season. His love of aviation, combined with a genius for tinkering with machines of any kind and a natural gift for understanding the elements of air and flight, helped him develop into a remarkably skilled pilot in just a few years.

In 1927 he set his sights on being the first to cross the Atlantic nonstop in a plane he named the Spirit of St. Louis, flying alone and using the stars for navigation. Taking off from Roosevelt Field in New York and flying to Le Bourget Field outside Paris in 33 and a half hours, he did what no other person had done before. 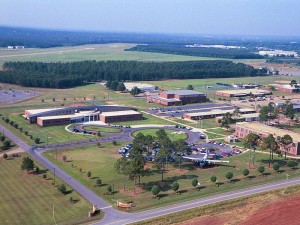 Lindbergh’s spectacular flight of daring changed the world. When he returned home, he went on a speaking tour in every U.S state capital city, including Atlanta, where he promoted civil aviation.

And did he ever succeed. In just a few years, an occupation that was generally berated as a deadly way for daredevils to make a few dollars barnstorming was transformed into a respectable industry that we now know as commercial aviation. At the center was Charles Lindbergh, and where it all started was an airfield in Sumter County that still exists.

That landing field has another distinction: it is the oldest continuously operating airfield in the United States that participated in two world wars (the army used the field for training during World War II). Surely one of the most important heritage sites in aviation anywhere is Souther Field, today named Jimmy Carter Regional Airport.