After decades of being ignored and abused, Proctor Creek’s time has finally arrived.

Proctor Creek begins downtown in the concrete jungle located around the railroad gulch and the Georgia Dome. Like all good headwaters of creeks, it only comes alive during major storms, and even then the runoff often finds it way to the low spots of the Vine City neighborhood.

The Proctor Creek disappears into tunnels off and on during its journey to the Chattahoochee River — becoming a vital part of our city’s water system.

Park Pride began a visioning process, led by Walt Ray, two years ago working with community leaders to find ways to clean up and revitalize Proctor Creek, rejuvenating the neighborhoods along the way by creating a series of green spaces along the creek. 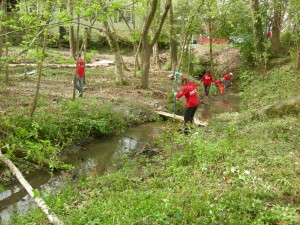 In fact the theme of Park Pride’s 2014 Parks & Greenspace Conference was “Pipes to Parks: Creating Greenspace with Rainwater” — in other words, how to build a closer relationship between our green ways and water ways.

As of Friday, April 4, we can declare victory on one of the first projects to emerge out of the Proctor Creek visioning process.

The Lindsay Creek Park, the only park in the English Avenue neighborhood, was born. And it came about in all the right ways for all the right reasons. 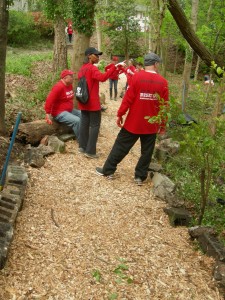 It truly was a grassroots, community-led effort that involved a host of nonprofit partners who worked tirelessly with nearby residents to design a park that they wanted.

“We started two years ago with community engagement,” said Shannon Lee of the Conservation Fund. “We wanted to make sure we provided assistance.”

The Conservation Fund, namely state director Andrew Schock and real estate director Stacy Funderburke, actually ended up implementing a vision that had been tried by State Rep. Able Mable Thomas, a resident, about five years ago.

Through contributions from the Arthur M. Blank Family Foundation, the Fund was able to acquire six pieces of property for less than $100,000 for the new Lindsay Street Park. On a good day, Proctor Creek flows through the middle of the new park, which will include rain gardens, a playground, a children’s garden and several overlooks. 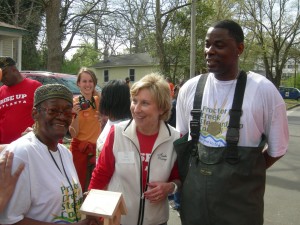 Nearly 200 volunteers from the Atlanta Falcons and Blank’s various business and philanthropic entities as well as community residents came out on Friday to turn a weeded, overgrown piece of land into a park that will be able to be enjoyed by the community.

Juanita Wallace, who grew up in English Avenue community, could not have been happier. She has lived in the area for most of her life, and she has seen the deterioration of both Proctor Creek and the neighborhood. 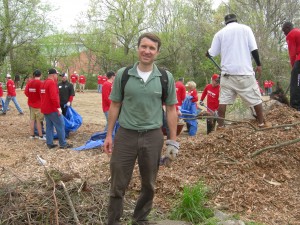 Stacy Funderburke next to where the lawn will be

“I remember when Proctor Creek was so clear you could see the fish,” Wallace said. “We used to have baptisms in Proctor Creek. This was a thriving community. But people moved away.”

Then looking at all the volunteers working to improve the property and clean up Proctor Creek, Wallace said: “It makes me happy to see people pulling together and coming to the community.”

But Proctor Creek today is anything but a clear water way, but Wallace has not lost hope it will return to its clean natural state one day. “I’ll be glad to see it before I leave this world,” she said. 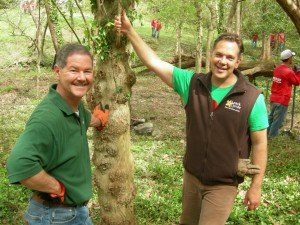 Funderburke said that getting community involved in designing and building a park is essential if it is going to be maintained and adopted by the neighborhood for the long-term.

“It’s about how you build a sustainable park in a community,” Funderburke said. “Without that upfront engagement, it won’t survive.”

The Lindsay Street Park, located near the dead end of North Avenue on the west side of town on less than two acres of land, is a wonderful starting point — a microcosm of what needs to happen all along Proctor Creek as it makes its way to the Chattahoochee — and all the other creeks and streams that travel throughout the city. 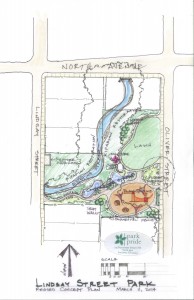 “We like to say – block by block, park by park,” Schock said.

Combining parks and creeks makes all the sense in the world.

Imagine how much more beautiful and healthier our city would be if we were tapping into our waterways and turning them into greenways; if we were day-lighting our streams and exposing their natural beauty, and if we were  turning our  flood zones into attractive water features that doubled as parks (like the Historic Fourth Ward Park).

Lindsay Park is a great beginning. Let’s keep on going — block by block, park by park, creek by creek.

Note to readers: This is the first in an occasional series of articles that I will be writing about Proctor Creek and various community efforts to improve the waterway in the near future.

Previous Article
Natasha Trethewey: poetry of place
Next Article
When the jury hugs the plaintiff, that’s not a good sign