LINK delegation soon will head to Baltimore and Washington D.C. to get ideas for metro Atlanta

On April 18, a group of about 100 influential metro Atlanta leaders will embark on the annual LINK trip — this year to the Baltimore and Washington, D.C. metro area.

This will be the 16th annual LINK trip — an annual opportunity to take a look at ourselves while studying another community that’s facing many of the same issues as metro Atlanta. (LINK stands for Leadership, Involvement, Networking and Knowledge).

The comparisons and contrasts between Atlanta and Washington, D.C. are striking.

Chris Leinberger, a developer and urbanist who is a senior fellow with the Brookings Institution, put it this way during a recent talk to the Rotary Club of Atlanta.

“Let me give you a few comparisons. You have the same population — exactly 5.7 million,” Leinberger said. “Both are Southern towns that were invaded by Yankees. Both are capitals. Both have a stable economic base. Both received grants to build urban transit systems in the 1970s. Both have been part of the Sun Belt boom, and both have terrible traffic, especially in the suburbs.” 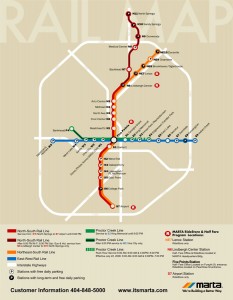 But while metro Atlanta quit investing in transit, Washington, D.C. never stopped. And as a result, the two cities have grown up in dramatically different ways. Leinberger said that Washington went from two walkable urban communities to more than 40 — mainly located around the Metrorail stations. Atlanta, on the other hand, has about five walkable urban areas.

The big reason? MARTA’s skeletal rail system is virtually the same as its initial investment. There have been about four or five extensions of existing lines, but the building out of a complete rail transit system has been left on the drawing boards.

But to track the growth of Washington’s Metrorail, Leinberger said it takes 29 computer clicks to see the evolution of the system (in other words, Metrorail has expanding and integrated its rail system 20 different times).

“Today, when I take a look at the D.C. skyline, I count 24 cranes,” he said. Most of the growth is in high-density, mixed-use, walkable communities connected by transit. By comparison, with just a few exceptions such as Midtown which is well served by MARTA, development has come to a standstill. “You are not offering the market what it wants.”

Leinberger will be the closing speaker later Friday afternoon during the LINK trip to Washington, D.C.

But between Wednesday and Friday, the group will hear and learn about several initiatives that are being tried in Baltimore and Washington.

Doug Hooker, executive director for the Atlanta Regional Commission, said a big question will be on how Baltimore, Washington, D.C. and northern Virginia operate as a region.

“We want to find out how they make regional decisions given the complexities of multiple levels of government,” Hooker said.

Education will be a centerpiece of the 2012 LINK trip. One of the main speakers will be Kaya Henderson, chancellor of Washington, D.C.’s Public Schools. She had joined the system as part of reformer Michelle Rhee’s team. She is now seeking to find ways to encourage innovation and entrepreneurship into the public school system.

The LINK delegation also will learn about the concept of “place-making.” The concept is to create places where developers, public officials and residents work collaboratively to create thriving, profitable and sustainable environments to live work and play..

Although the LINK delegation will not be exploring federal policies toward metro regions, there will be a session with Georgia’s two U.S. Senators — Johnny Isakson and Saxby Chambliss. Also Georgia members of the U.S. House have been invited to attend.

It’s also possible that there will be a visit from a couple high-ranking officials from President Barack Obama’s administration, but that has not been confirmed.

On the last full day of programs, the group will head to Virginia’s Fairfax County and explore the relationship between Arlington and Washington, D.C.

A session will explore how the two communities have benefited from good planning and strategic investments — individually and together.

All these are considered key lessons for Atlanta’s regional leaders to bring back home.

Just to mention a handful of those who will be on the trip:

On the business side: executives from the Metro Atlanta Chamber, the Cobb Chamber of Commerce, the Gwinnett Chamber, the Henry County Chamber, the North Fulton Chamber, the DeKalb Chamber, Central Atlanta Progress, Midtown Alliance, the Buckhead CID, Gwinnett Village CID, the Stone Mountain CID, and the Perimeter CIDs.

And here is the chronological history of the cities where the LINK delegation has gone:

Note to Readers: I will be filing daily reports during the LINK 2012 trip on SaportaReport, and then I will write a wrap-up of what we learned for the Atlanta Business Chronicle.