A 390-acre green oasis sits in the western corner of metro Atlanta, with miles of streams, ponds and wildlife that have sat untouched for over 14 years. The folks at the Southern Conservation Trust (SCT) envision opening the space to the community.

Once known as the Bear Creek Golf Course, the 18-hole property in Douglas County closed its doors in 2003, and the land sat unmanaged until 2017 when a Buckhead developer donated the plot to SCT. Now, the team envisions creating a Little Bear Creek Nature Area, with five miles of hiking trails and spots for birdwatching and fishing. 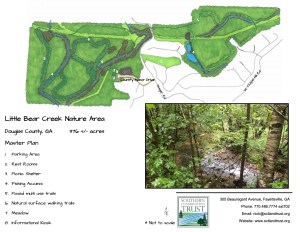 “It’s an amazing property. We just absolutely love it, and the moment we saw it, we knew it needed to be a public area,” SCT CEO and Executive Director Katie Pace Quattlebaum said. “We’ve spent the last five years working with the county and going through the zoning requirements to make that happen. We finally got rezoned in May.”

Founded in 1993, SCT has over 65,000 acres under conservation in 13 states throughout the Southeast. Property sizes range from Atlanta’s 1.75-acre Lake Claire Community Land Trust to an 8,000-acre plot in South Carolina.

Left unattended for a decade and a half, the flora and fauna at the former Bear Creek Golf Course are thriving — home to three miles of perennial streams, two lakes, significant elevation changes, and plenty of coyotes, deer, birds and amphibian.

“It’s a really surprisingly diverse and healthy property, coming from a golf course that was left to its own devices for many, many years,” SCF Conservation Biologist Brian McKnight said. “[The beaver ponds] were golf course ponds that were not kept up and because they weren’t being treated and fertilized, they became a wetland. We see beaver chewing on the trees around those ponds. They’re not natural, but they’ve created a very natural situation.”

Under this agreement, the landowner still owns the property and can live there or sell it, but the development guidelines remain in place. Essentially, GPLT monitors the property to ensure that SCT is following the easement’s guidelines which state that the land cannot be developed outside of a public nature area.

“We picked this specific land trust because we knew they would keep us in check,” Quattlebaum said. “It’s a unique property that needs to be protected, so we wanted to ensure that we had our checks and balances in place. That’s a reason that land trusts should not hold their own conservation easement.” 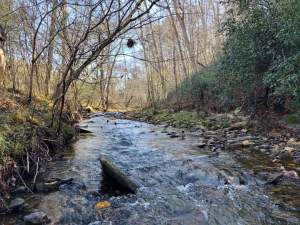 The 390-acre plot is home to three miles of perennial streams that flow year-round. (Photo courtesy of the Southern Conservation Trust.)

Metro Atlanta sits in the Piedmont Region, which is home to 16 habitats marked as high-priority by the 2015 Georgia State Wildlife Plan, and these areas are most important to most local trusts. According to the SCT team, Little Bear features five high-priority habitats — compared to the average two or three — and falls under the Southeast Conservation Blueprint of important places for conservation.

“Very rarely do we get donated a property that has so much potential,” Quattlebaum said. “We get properties donated all the time but this property has more habitat than any property we’ve ever had donated. It’s a gem.”

The SCT is fundraising for the first of two development phases, which includes replacing invasive species with native plants, restoring the streams and wetlands and clearing the existing paved paths. Quattlebaum hopes to fully complete and open the nature area in five years.

Once open to the public, the team knows Little Bear will offer a much-needed green oasis for the metro Atlanta community.

“[Little Bear] is a refuge for plants and animals, but also the more people there are, the more demand for green space and hiking trails,” McKnight said. “All you have to do is go to Stone Mountain Park and see the thousands and thousands of people there a day. It’s one of those places that’s loved to death because there aren’t enough trails or green space. [Little Bear] has already been repairing itself over time, so I think it’s a win-win scenario for park goers and the habitat.”