As a demonstration facility of all things sustainable, Southface Institute showcases many operational features, including methods to process food and gardening waste. Due to its age and exposure to the elements, Southface’s outdoor composting system had started to break down, making it difficult to properly maintain the right nutrient balance for successful composting. Fortunately, thanks to the hands-on commitment of a group of dedicated young people from the Atlanta community, Southface recently became the beneficiary of a new outdoor compost bin system.

Will Johnson, a local high school student and Boy Scouts of America Eagle Scout candidate, needed to lead a service project that benefitted his community as part of his work to earn the rank of Eagle Scout. After being introduced to Southface and learning about the shared vision between Southface and the Boy Scouts to build stronger communities that are both engaging and create positive benefits for future generations, Johnson understood that the idea of building a new compost bin for Southface was a natural fit for his project. 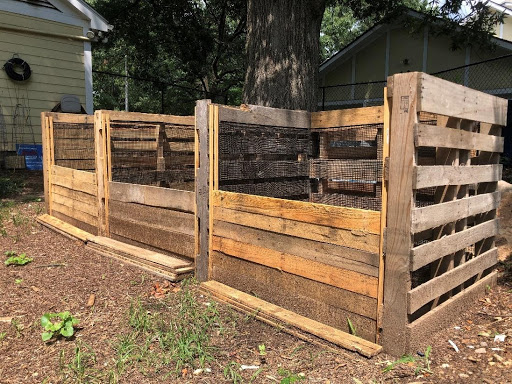 The composting bins are built from repurposed wood pallets and mesh netting.

Johnson led a team of Scout members and fellow high school students in the effort to build Southface a new outdoor composting system that was fully functioning, easy-to-use and visually appealing so Southface could continue its demonstration of another way to compost, as well as enhance its waste diversion program. First, he proposed the project and had it approved by his troop leader, sourced repurposed wood from used wood pallets and designed the new and improved compost bin system that was larger and had an additional third chamber. Then he led his team in leveling the ground at the bin’s new location, building the bins and adding an interior mesh liner.

From conception to completion, Johnson used his diligence, creativity and leadership skills to lead his peers through a meaningful service project that delivered hands-on experience in the ease of building and, eventually, starting composting systems within their own communities.

The Impact of Composting at Southface

At Southface, food and yard trimmings account for more than 50% of generated waste—up to 700 lbs. of food waste per month (pre-COVID) and, depending on the season, up to 900 lbs. of yard trimmings. Through its waste diversion program, including recycling and composting, Southface diverts an average of 90% of its waste away from landfills. By composting, the sustainability nonprofit is able to reduce the greenhouse gas emissions that would have been created by that waste by diverting it away from landfills and, instead, converting it into healthy, nutrient-rich, organic soil that is used on the grounds and in the vegetable garden.

The outdoor composting bins rebuilt by Johnson and this team are one of two composting methods implemented at Southface to bolster sustainable operations. The other method is a pick-up service for food waste through partner organization CompostNow.

Southface and Johnson are already discussing plans for future partnership opportunities for young people to engage in and promote sustainability that are beneficial, meaningful and engaging for the local community.

Community organizations, businesses and nonprofits everywhere could greatly benefit from the drive and determination that young people have to build a more sustainable future. Are there any local groups in your community that would benefit from a partnership opportunity to help further your sustainability goals? If your organization would like to learn more about improving its sustainable operations, please learn more at Southface.org.