Campers hard at work on their bird houses. (Photo courtesy of the Atlanta Preservation Center.)

For the second year in a row, the Atlanta Preservation Center teamed up with Zoo Atlanta and the City of Refuge to host a summer camp for local elementary school students. Last week, 30 children spent the week getting to know Atlanta, touring some of its iconic landmarks and learning the history that makes the city unique.

The campers started each morning at the Center’s headquarters — L.P. Grant Mansion, the oldest house in the city — then hit the town touring local landmarks, and wrapped up the day with their favorite furry and scaly friends at the Zoo.

The campers were selected by the City of Refuge — a local faith-based organization that provides services to individuals and families in crisis — and the camp is free of charge for the families.

Throughout the week, the campers checked out some of Atlanta’s most famous and oldest landmarks, like The Madame CJ Walker Museum/WERD Radio, the Plaza Theatre and Grant Park. 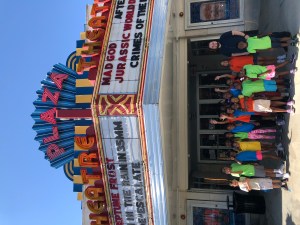 While at the Plaza Theatre, campers watched 1961 the Yogi Bear cartoon and silent films accompanied by organist Ken Double of the Fox Theater. (Photo courtesy of the Atlanta Preservation Center.)

“Everything is anchored in preservation because without these things being protected [and] preserved, you wouldn’t have all this,” Atlanta Preservation Center Executive Director David Mitchell said. “Hopefully [the camp] starts the foundation of stewardship and shows that preservation isn’t just simply old walls or old buildings, it’s far more. It’s about culture and it’s about identity.”

That was the inspiration behind the trip to Grant Park, for example, where the campers were joined by the Georgia Audubon Society for a birdwatching tour.

“L.P. Grant, who gave us Grant Park, made all of his grandchildren join the Audubon Society,” Mitchell said. “[The park] has since evolved and changed, but nonetheless, that continuum was maintained. By exposing kids to this now, you hopefully are imprinting upon them that it’s not a removed experience from them, [these landmarks are] as much theirs as anyone else’s and it’s also their responsibility.” 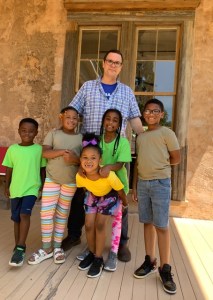 In the digital era, some may think that kids are bored without their devices, but Mitchell had a different experience. Instead of a lunchtime movie or downtime playing video games, the team pulled out old-school games from the 1800s or crafts for the kids to enjoy.

“It’s not all digitized. We have a more traditional approach,” Mitchell said. “This year post-birdwatching, everyone got real serious about making their birdhouses and painted for like an hour. The things that maybe now, people would look at and say, ‘Nobody wants to do that,’ these kids were on it. It was really great to see that.”

Ultimately, the team hopes that the kids walked away with a sense of pride in their city, and a desire to help protect what makes it special.

“We really created something that I think is unparalleled, because it’s not using a campus or singular space for the camp. [Instead,] Atlanta is the camp,” Mitchell said. “There’s a lot of challenges going on and it doesn’t ever seem to relent. So it’s nice to provide an experience where an open door is an open door, and you’re part of that. I think having the oldest door in the [city] open up and say, ‘come on in,’ sets a nice path.”