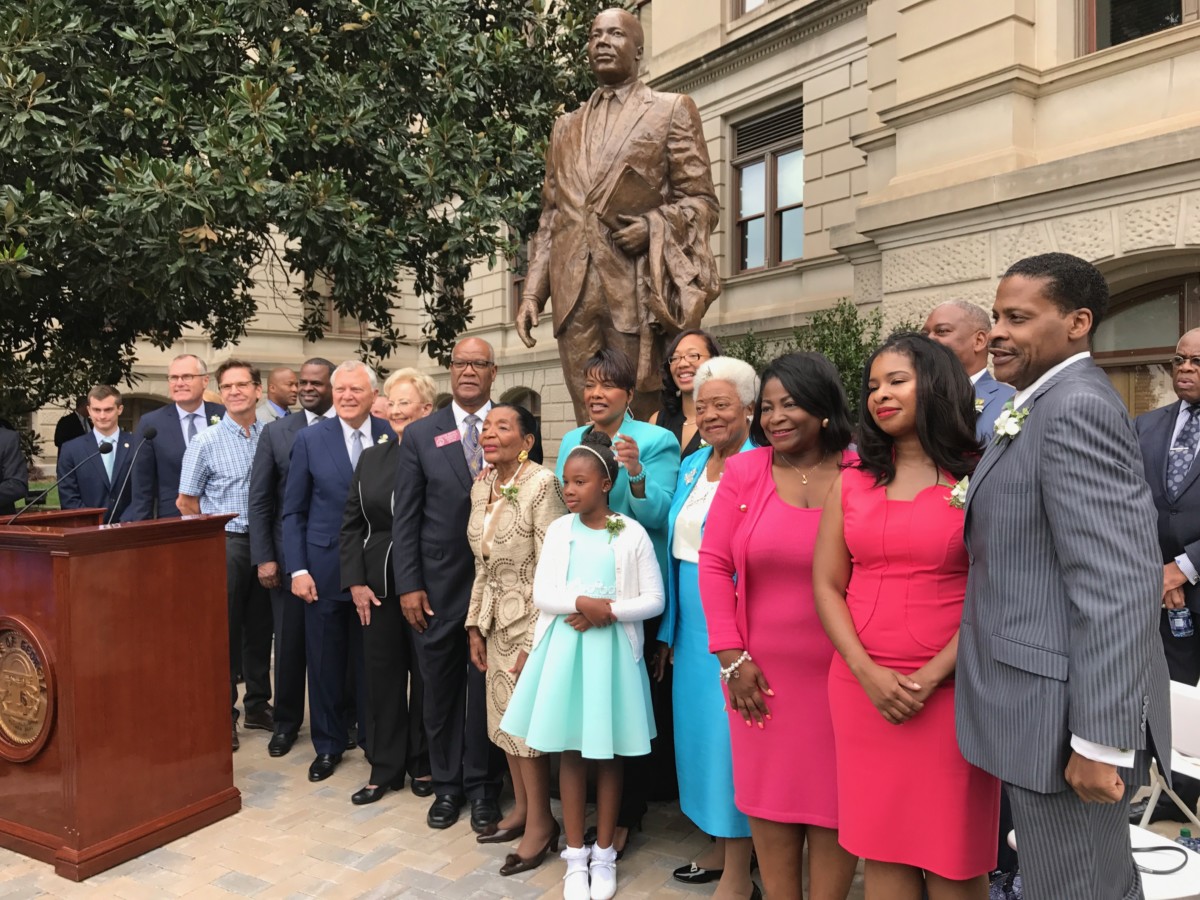 Members of the King family stand in front of the new statue of Martin Luther King Jr. (Photo by Maria Saporta)

A statue of Martin Luther King Jr. was unveiled Monday morning on the grounds of the State Capitol – exactly 54 years after the slain Civil Rights leader delivered his “I have a dream” speech during the March on Washington.

For Georgia, it was a moment of celebration.

The statue is located on the same spot where the replica of the Liberty Bell stood from 1950 to 1976 (it is now located across the street in Liberty Plaza). 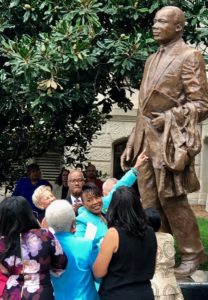 “The bell remained silent for several decades – and it’s only been rung on three occasions,” Deal added. “Now today, it will ring for the fourth time as we unveil this beautiful monument.”

The bell then rang four times.

“This is a day the Lord has made,” said Bernice King, the youngest child of the Civil Rights leader who also is CEO of the King Center. “It is a glorious and grade day in the State of Georgia, in the United States of America and all over the world.”

She  spoke of how her father inspired the nation during a time of turmoil.

“Through the symbol of this statue, I believe it also provides a sense of hope to a nation that is in turmoil once again,” Bernice King said. “It is apropos that in the state of Georgia, once a Confederate state, that we are erecting a statue.” 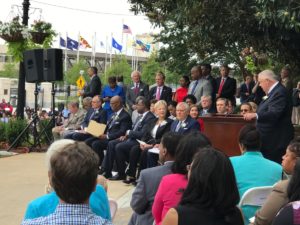 David Ralston, Georgia’s Speaker of the House, expressed the feelings many were thinking.

“This day took much too long to get here,” Ralston said. “We have the responsibility and duty to see equality and justice. We it comes to righteousness, we still have a long road ahead of us.”

Ralston also said it was fitting that the statue of King faces east so he will be the first to see the sun rise every day. The statue is on the northeast corner of the State Capitol grounds at the intersection of Martin Luther King Jr. Drive across from Liberty Plaza.

State Rep. Calvin Smyre (D-Columbus) had been instrumental in getting the state to approve the King holiday and for making sure the Georgia erected a statue to honor King, one of the state’s greatest leaders.

“Today is a defining moment in our state’s history,” Smyre said. “Let’s not fumble. Let’s take advantage of this moment.”

Among the dignitaries in attendance were U.S. Senator Johnny Isakson (R-Georgia) as well as several congressmen, including Sanford Bishop (D-Columbus) and David Scott (D-Atlanta).

Placing the statue on the Capitol’s grounds has taken on even greater significance since the protests in Charlottesville, Va. – where the possible removal of a statue of Robert E. Lee, a Confederate General, ignited demonstrations of white supremacists, Nazi sympathizers and alt-right advocates clashed with counter-demonstrators. 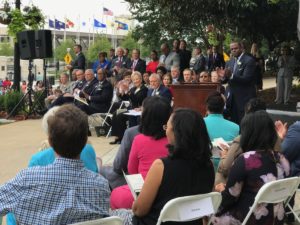 Since then, there have been discussions all over the South, including in Atlanta and Georgia, on whether we should remove monuments and statues that honor leaders of the Confederacy.

“This statue also means something ore in the shadow of the Gold Dome – across from Liberty Plaza,” said Atlanta Mayor Kasim Reed. “There’s God in that. It will provide essential balance to the story of Georgia.”

Former State Sen. Vincent Fort, who is now running to become mayor of Atlanta, acknowledged that statues and symbols do have substance. But they are not enough.

Fort also observed that many of Georgia’s top leaders have not denounced the comments of President Donald Trump, who called some of the alt-right protesters good people. 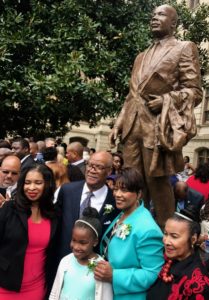 “Gov. Deal has not said one word about Donald Trump’s intolerance,” Fort said, “not one mumbling word.”

State Rep. Park Cannon also pointed out an irony. While state leaders were unveiling the statue in honor of Martin Luther King Jr., which was completely privately funded, the state had removed its annual $100,000 contribution to the King Center from the budget.

Fellow State Rep. Billy Mitchell (D-Stone Mountain) also noted the need for the state to support the King Center – at the same time it was unveiling a statue in King’s honor.

“I will be advocating for the King Center,” Mitchell said. “I don’t believe there’s a will in the State Legislature and with the governor right now to remove those funds. There are those of us in the Legislature who believe it should be increased.”

Several members of the King family assembled at the event on Monday morning, including MLK’s sister – Christine King Farris. The youngest King family member in attendance was Yolanda Renee King, the only grand-child of the late Civil Rights leader and the daughter of Martin Luther King III and Arndrea King..

When asked how she felt about the statue, Yolanda King said: “I loved it. I cried.” 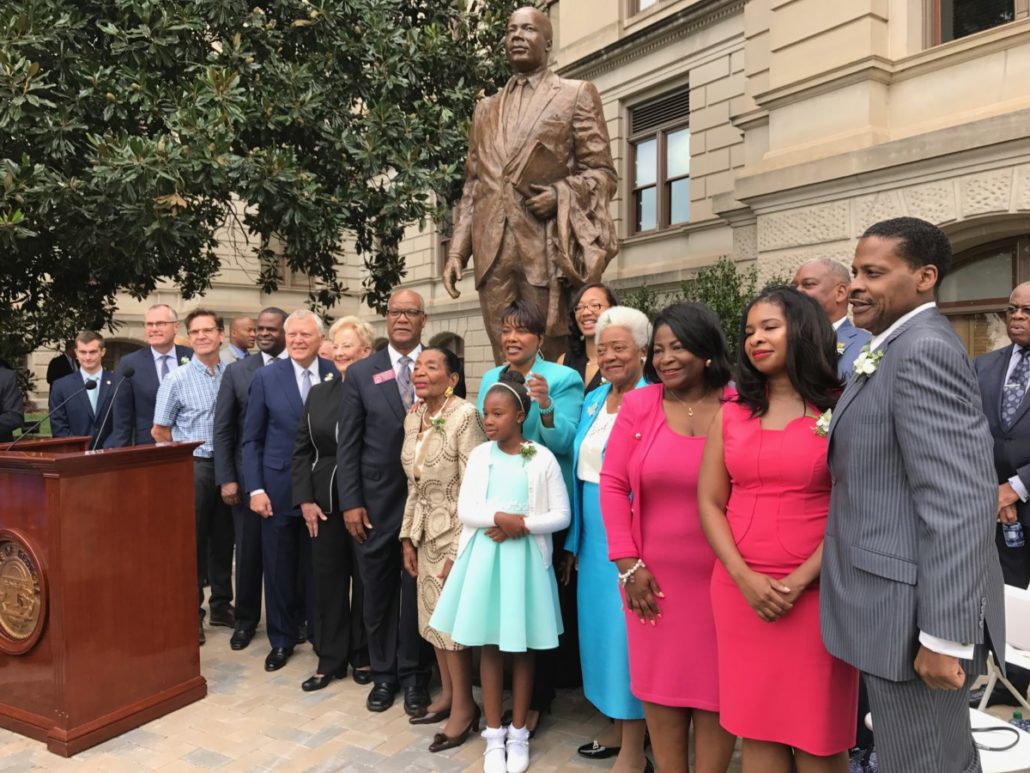 Members of the King family and other dignitaries stand in front of the new statue of Martin Luther King Jr. (Photo by Maria Saporta) 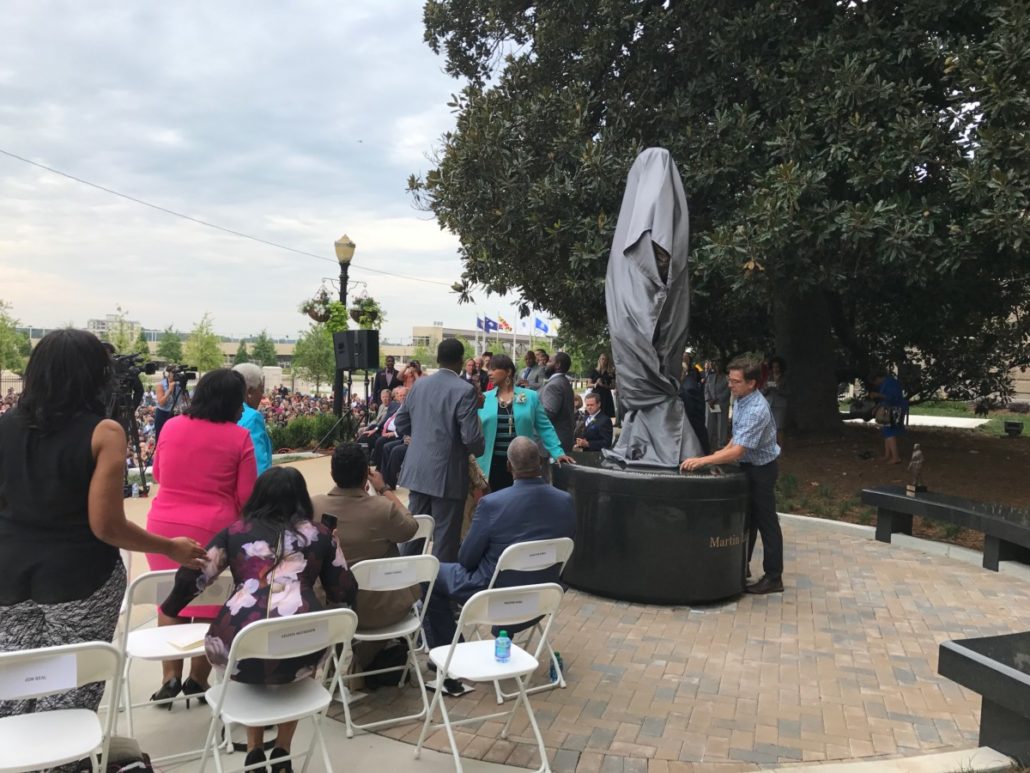 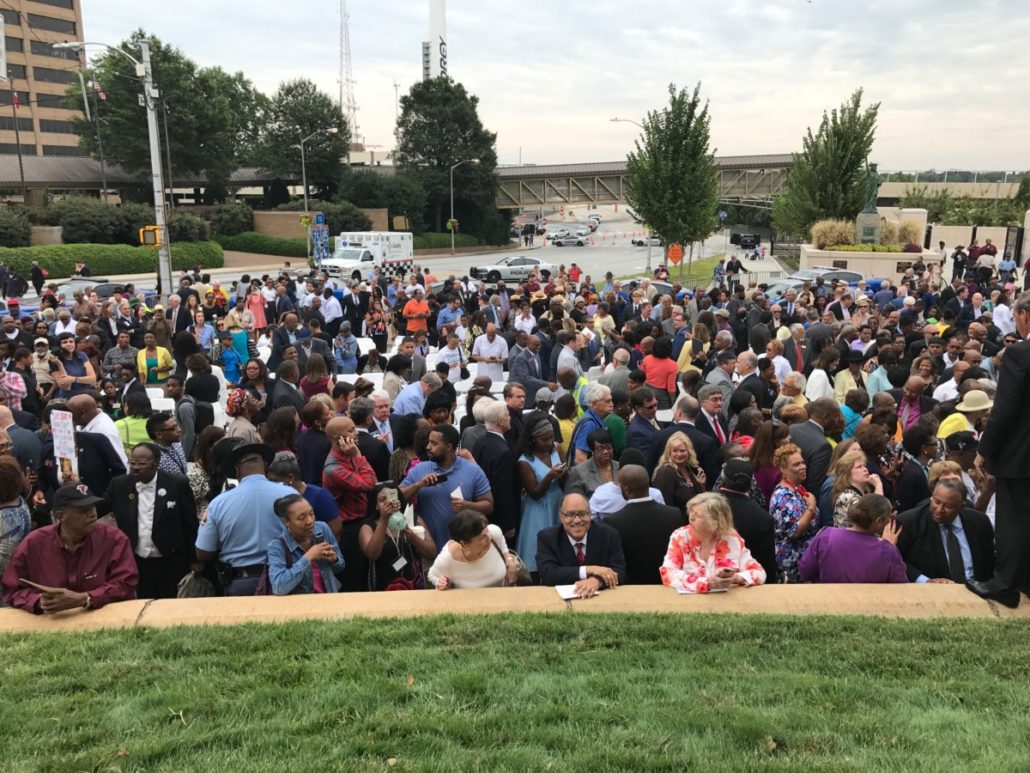 Hundreds of people came for the unveiling of the new statue of Martin Luther King Jr., including former state Sen. Vincent Fort in the middle of this photograph (Photo by Maria Saporta) 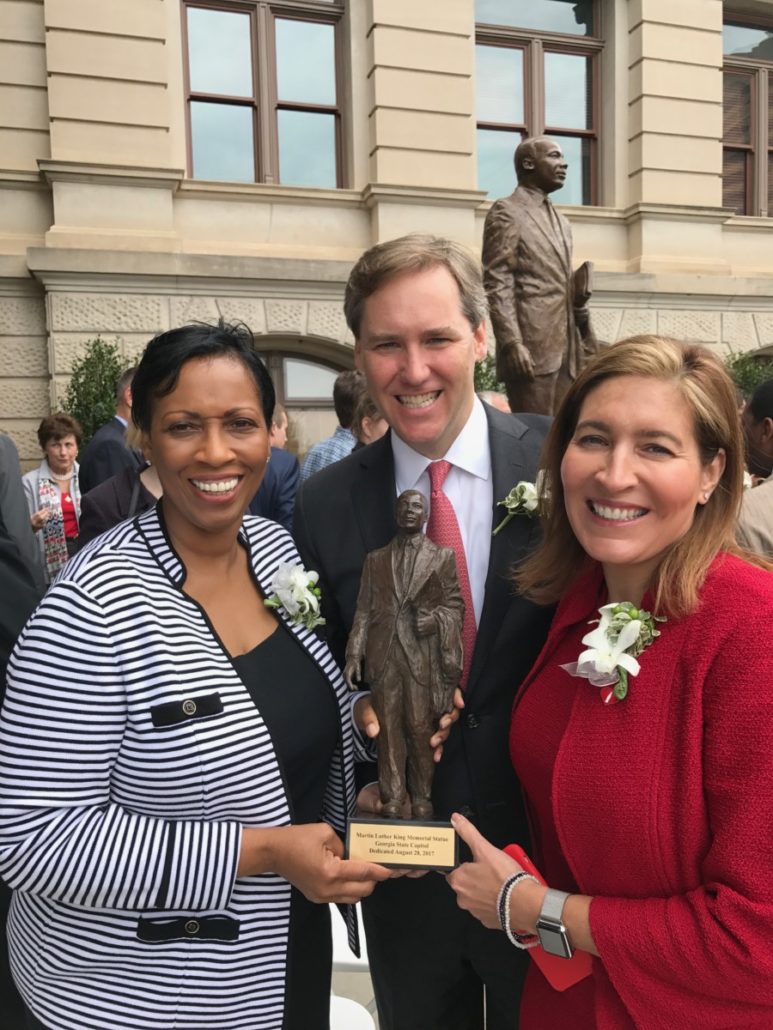 The statue was paid for by private contributions, including Atlanta’s Coca-Cola Co., which received a replica of the statue. (left to right: Coca-Cola’s Helen Smith Price, Matt Echols and Bea Perez (Photo by Maria Saporta) 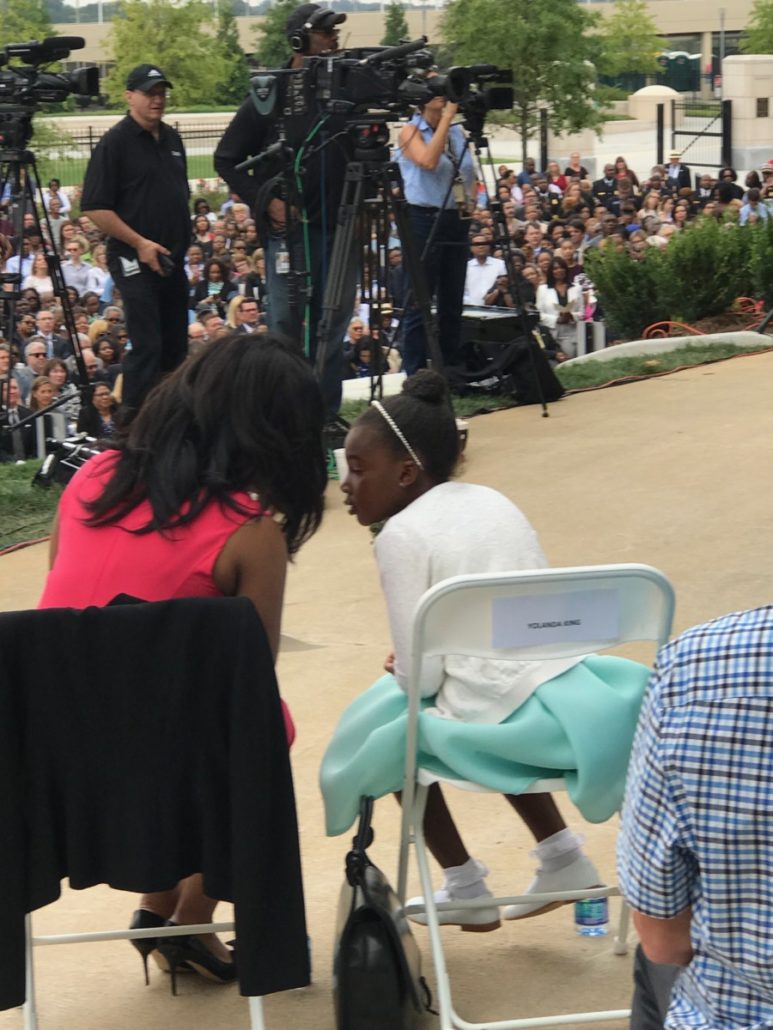 Yolanda Renee King leans over to talk to her mother – Arndrea King, the wife of Martin Luther King III. She said she cried when she saw the statue (Photo by Maria Saporta)