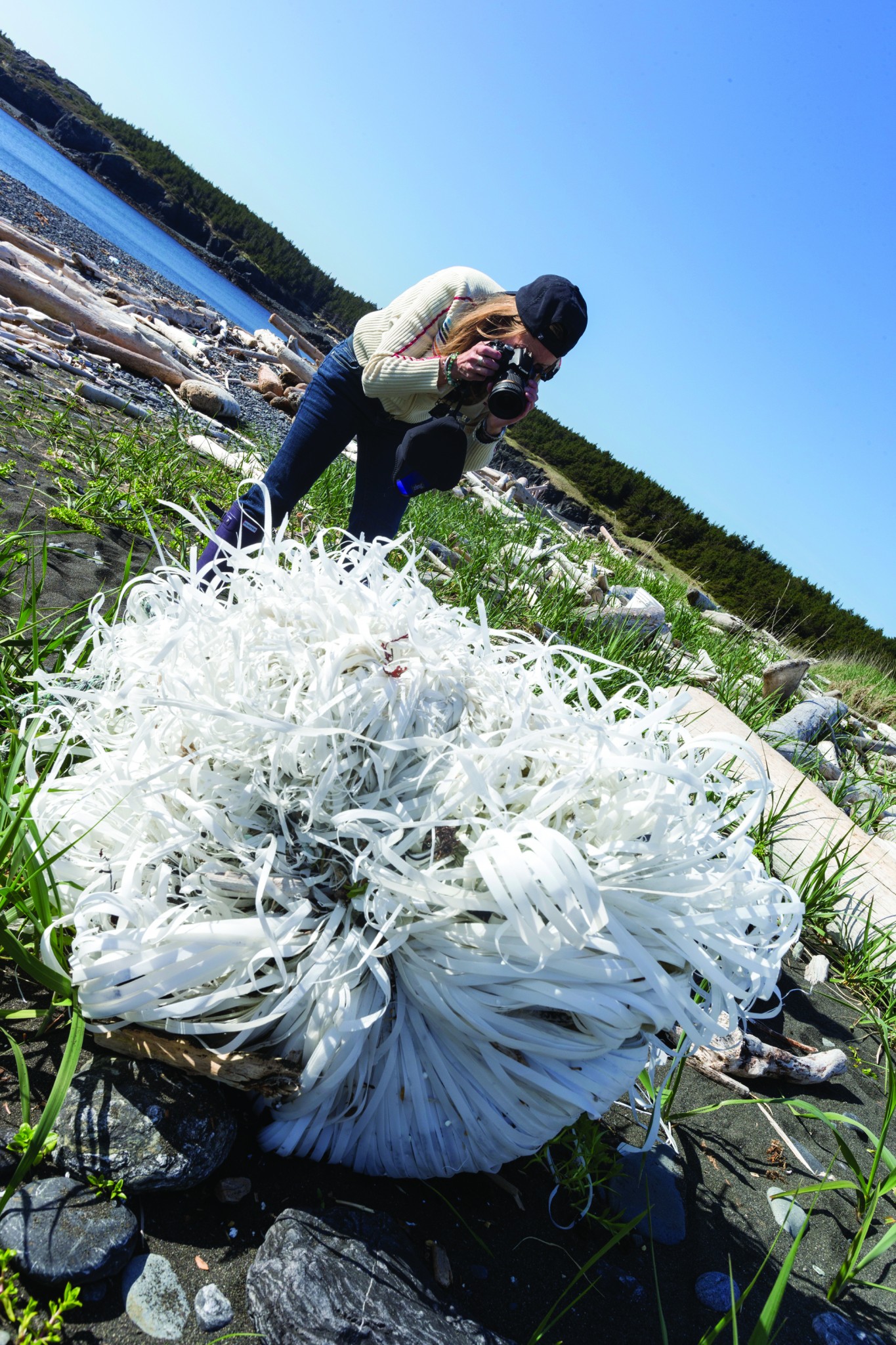 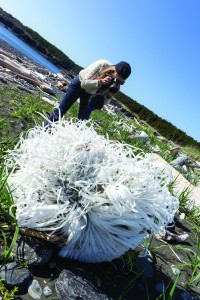 The persistence of marine debris, carried by enormous ocean currents, inspired the provocative sculptures and assemblages at the odd museum in CDC headquarters. If you swim in the ocean or admire its immense power, seek out “Gyre: The Plastic Ocean” before it closes June 16 at the David J. Sencer CDC Museum.

Georgia State University art professor Pam Longobardi fashioned a giant cornucopia titled “Bounty, Pilfered,” the largest and most complex sculpture of her career. It features only a fraction of the tons of trash gathered from remote inlets in Alaska—garbage that became the palette for three of the 25 “Plastic Ocean” artists. The rest use marine debris from other locations, sometimes working within one medium, like broken plastic rulers and other measuring devices. An artist can be picky when so much washes up.

It’s fascinating and disturbing to see life-sized “Sled Dogs,” captured in mid-stride like the animals in a Narnia winter, frozen instead in plastic that Cynthia Minet assembled from her base in Los Angeles. In Alaska, Longobardi and four artists collected material on an expedition by charter boat to create their works. These five took advantage of the great range of plastic flotsam and jetsam, from doll heads and NFL-branded flyswatters, to bottles of Coke and Clorox, to flip flops and fishing nets. Mark Dion’s “Cabinet of Marine Debris” displays his beach souvenirs as carefully as Darwin did his species.

None of the art is small (like “Thongs,” John Dahlsen’s 9×4 foot print of more than 1,000 flip flops collected on Australia’s remote beaches), which emphasizes the scope of the problem. Perhaps the most visceral piece is a photograph of intricately designed circular mosaic. Its small plastic pieces were found inside the stomach of an albatross chick that had died; artist Susan Middleton observed the chick’s parents feeding it garbage for two months. She titled her work simply, “Shed Bird Stomach Contents.” 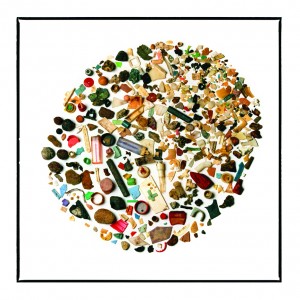 “From the most untouched and remote places to the teeming cities of earth, plastic pollution is pounding us all,” Longobardi said by email from Greece, where she is pursuing her work at the intersection of art, science and the environment. The CDC exhibit shows that “incredibly talented artists have a multitude of powerful visions for expressing their anger, frustration, desperation, pain, hope and challenge to humans to wake up to this problem, change our behavior and halt the plastic tsunami before it envelopes the entire planet.”

Another astonishing aspect of the exhibit is how the ocean currents carried this trash for thousands of miles before spitting it out on some of the most unspoiled areas of the world. A film that introduces the exhibit explains how a giant marine vortex called a gyre (starts like “giant,” rhymes with tire) collects floating plastic and corrals it into ginormous islands of floating trash that can be thousands of miles wide. A study conducted by an international research team and published in the open access journal PLOS One estimates that at least 5.25 trillion plastic particles weighing 268,940 tons are currently floating at sea.

Alaska’s southwestern inlets are on the northernmost arc of the North Pacific Gyre, which is two times the size of the United States. and the current pushes tons of marine trash into this remote, uninhabited area. 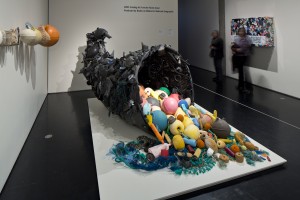 If it seems impossible to find a solution to “the ghosts of our consumption,” as Longobardi calls throwaway plastic, so did creating this powerful artistic message. It took five years for the artists to complete the expedition and exhibition that became known at the GYRE project.

Howard Ferren, MD, an Alaska conservationist, recruited Longobardi. “The grand scope of GYRE required buy-in from a vast group of sponsors and participating institutions, none of which were on board at the beginning,” she said. “Howard had to raise nearly a million dollars, and the scale of that seemed daunting and at times, absolutely impossible. It was unprecedented in many ways: the intensely remote geography—unihabited coastal Alaska, and its complexity—art and science with policy makers looking at the most complex and challenging problem of our day: plastic pollution.”

By the end of the project, Ferren had gained support from the Smithsonian, National Geographic, NOAA, and several significant foundations and institutions, both scientific and art/culture. “What I learned was that unyielding vision fueled by passion, knowledge and relentless pursuit can make something seemingly impossible happen,” Longobardi said.

Longobardi helped bring the exhibit to Atlanta by networking with CDC museum director Judy Gantt and curator Louise Shaw. Since its founding in 1946—the same decade that saw the first spread of plastic manufacturing—CDC has been concerned with environmental health issues. 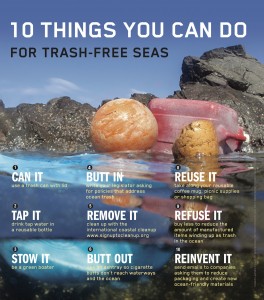 Today, the National Center for Environmental Health measures several plastic-related chemicals (or their metabolites) in human samples and studies their impact on health. CDC and its partners also explore connections between oceans and human health, and CDC’s Quality and Sustainability Office and the Go Green, Get Healthy initiative promote recycling and waste awareness and encourage change that will result in long-term solutions to environmental stewardship.

For travelers to the beach this summer and the rest of us can follow simple steps to keep plastic pollution from worsening. Use a trash can with a lid, drink tap water from a reusable bottle, picnic with reusable dishware and containers, and lobby public officials and corporations for policies and packaging that curb ocean trash. Perhaps most important: buy fewer plastic items.

“Much new and hopeful work is beginning to take hold all over the world,” said Longobardi, whose work will take her to Belize after Greece. “We are part of a global and international movement that is underway in many different forms and in many different places that will transform society from its unawareness of the toxic and deadly use of plastics, not only for ourselves but for the fellow creatures of the planet.”