By Maria Saporta
As published in the Atlanta Business Chronicle on February 26, 2016

Atlanta’s top booster at AT&T, Ralph de la Vega, is moving to Dallas as part of his promotion to vice chairman of the international telecommunications company.

But Atlanta will continue to be a critical hub for AT&T, De la Vega said in a telephone interview before heading to Barcelona, Spain, for the annual Mobile World Congress, where he was a speaker on Feb. 22.

“Atlanta will be fine,” De la Vega said. “We have a huge operation in Atlanta, and that operation doesn’t change. Our mobility business is doing great.” 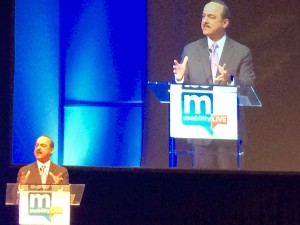 De la Vega should know. He became president of Atlanta-based AT&T Mobility in 2007, and later he was given added responsibilities over AT&T’s consumer markets.

Most recently, De la Vega has been CEO of AT&T Mobile and Business Solutions, a role where he described the world of the future with the “Internet of Things” — a world that’s already here.

Every electronic item in our homes, from televisions to air-conditioning to security, and aspect of our lives from our cars to smart phones to entertainment devices will be connected through mobile communications, the cloud and the Internet.

“We are trying to really revolutionize the way entertainment is consumed,” De la Vega said.

Given that he has been increasingly focused on the integration of mobile communications with the Internet of Things, Glenn Lurie has taken over the responsibilities of running AT&T Mobility as its president and CEO. Lurie continues to be based in Atlanta.

But the recent leadership changes at AT&T mean that Lurie no longer will report to De la Vega. Instead, he will be reporting to John Stankey, who is now the CEO of AT&T’s entertainment group and consumer mobility.

“Atlanta will be fine no matter who is running the show,” De la Vega said. “Glenn Lurie is great. It will continue to be a great hub for AT&T. The city has been good to us.”

“Everybody in Atlanta has been terrific,” De la Vega said. “Our chairman loves Atlanta. I think you will continue to see us invest in Atlanta in many ways.”

AT&T selected Atlanta to be one of its “spotlight” cities for its Smart Cities program. The company also has developed a number of partnerships with Georgia Tech, including an innovation center as well as special courses.

“It is a very significant assignment and an opportunity I couldn’t turn down,” De la Vega said. “Never did I dream it would be possible for me to become vice chairman of AT&T. But it will be tough to leave Atlanta.” 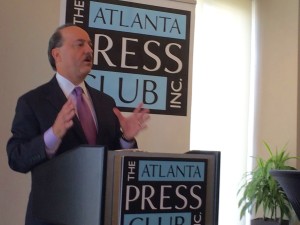 De la Vega also hinted he will be working on some other special projects that he can’t talk about at this time.

“It’s an exceptional opportunity and not one we could easily turn down,” De la Vega said. “It’s a good opportunity to expand. I used to run the international properties for BellSouth. I have lots of experience in that field.”

During his telecommunications career that spans more than four decades, De la Vega also has moved 13 times for his career. This will be move No. 14.

But over the decades, De la Vega has continued to find a way back to Atlanta.

When asked if he would move back to Atlanta after his stint in Dallas, De la Vega said, “I’ve come back five times. If there’s a sixth time, I don’t know.”

De la Vega was born in Cuba and his family decided to leave after the revolution. On July 1, 1962, they were all supposed to leave Cuba for Miami. But the paperwork only was for one person. That’s how then 10-year-old De la Vega ended up traveling alone to live with a family he barely knew. It took four years before he was reunited with his parents and sister.

Throughout his career, De la Vega has lived in or traveled to places all over the world. But he has always had a special place in his heart for Atlanta.

“It’s been a great place,” De la Vega said. “Atlanta has been foundational for me.”

And he has been a loyal business leader for the city, helping build its role as a hub for mobile communications and technology. In fact, De la Vega had been in line to serve as the 2018 chair of the Metro Atlanta Chamber before his recent promotion that will take him out of Atlanta. Lurie will be filling that slot instead.

Meanwhile, De la Vega is not putting any time limit of how many more years he intends to work.

“I will do it for as long as I can,” he said. “There’s no specific contract. There’s no written mandatory retirement age. I’m 64, and I feel terrific. My health has never been better. I have always loved to work.”