Look back in panic: Atlantic editor faces, copes with anxiety 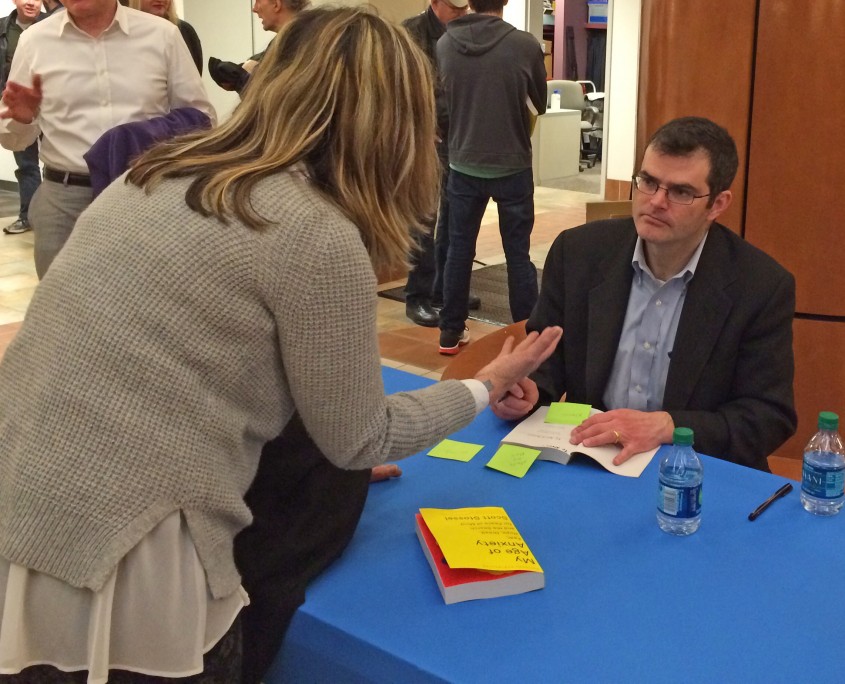 Scott Stossel at a book signing following his appearance at the Marcus Jewish Community Center in Dunwoody on Sunday, March 1. Stossel, who suffers from severe panic disorder, is the author of “My Age of Anxiety: Fear, Hope Dread, and the Search for Peace of Mind.”

Scott Stossel didn’t look like a nervous wreck Sunday night in front of more than 200 people at the Marcus Jewish Community Center. He talked a bit fast and used frequent hand gestures, but I expected far worse from an author with a lifetime of debilitating anxiety.

The editor of The Atlantic magazine, Stossel spoke and answered questions about his 2014 memoir, “My Age of Anxiety: Fear, Hope Dread, and the Search for Peace of Mind.”

As a child, he suffered “screaming bouts of nighttime panic.” He lives with phobias that include the fear of public speaking, heights, getting stuck in tight spaces, fainting, germs, vomiting, cheese, flying and, of course, throwing up while flying, among others. He is also a happily married man with two children and is a successful Beltway insider. How is high achievement possible with panic looming so near? How does he cope?  Curiosity drew many of us to hear his answers.

“I’m very capable of being kind of undone and completely subjugated by the ravages of the monsters inside my own mind. And sometimes I’m capable of crumbling under real pressure,” Stossel said to an audience of more than 200 at the MJCC. “But the weird thing is that I’m usually much better at dealing with real professional pressures that come with putting out a magazine every month.”

“It’s easier for me to deal with that than the imaginings of my own mind.”

A good storyteller, Stossel covered large swaths of his own personal history with severe panic disorder and the myriad treatments, psychological and psychopharmacological. Stossel writes that he “was the beneficiary or possibly the victim of seemingly every passing trend in psychotherapy and psychopharmacology,” an excerpt read aloud by event moderator Elizabeth Cohen, CNN senior medical correspondent. 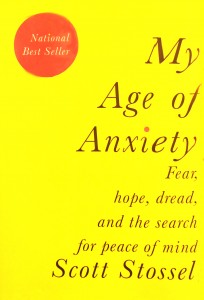 Those treatments included a litany of more than two dozen medications (familiar to many of us audience members with anxiety issues) and cognitive behavioral therapy, including exposure therapy. In hilarious and heartbreaking detail, Stossel described some of his experiences, including exposure therapy for emetophobia (fear of vomiting). As Stossel gave an impromptu lecture in front of a film of people retching and losing their lunches, he noticed graduate students turning green too.

For him, purging his fear of purging wasn’t that simple. In another related therapeutic experiment, Stossel took ipecac. He spent hours heaving on a rest room floor without spewing, but the sight did make his doctor lose it.

Loneliness but not alone

Then there was the tornado that hit Stossel’s Maryland home when his family was away. The twister touched down in his backyard, exploded his bedroom window, toppled a tree on his house and made the kitchen ceiling crash to the floor. Stossel recalled in that instant how he feared he might drown. And when the house was no more, he would be exposed to his neighbors without his pants—a ratcheting of anxiety familiar to many of us.

Famous people throughout history have been debilitated by anxiety, Stossel noted. They ranged from Charles Darwin to Sigmund Freud, whose train phobia was so intense that he would sit in a separate compartment from his wife and children so they couldn’t see him. Former NBA star Bill Russell’s habit of throwing up before games was a sure sign to his coach and teammates that he was going to have a good one.

Stossel pointed out studies that show, among other things, that the effect of having too much anxiety or too little can lead to similar results when it comes to performance under pressure.

“A panic attack is really an adaptive flight or fight response gone awry,” said Stossel. “In the right circumstances, like when my house was falling down or even more aptly if you’re in a state of nature and you’re being attacked by a saber-toothed tiger or you’re on the beach at Normandy, it makes sense that all of your blood should run away from your digestive system.”

So did he have any secrets for getting through this conversation with a couple hundred strangers? Before the night was over, Stossel acknowledged he had used Klonopin. It is used to prevent panic attacks, and helped him override his anxieties. That and his sense of humor demonstrated that on the edge of intense fear and uncertainty, a full life is possible.

Staff writer Ben Smith can be reached at [email protected]