At 78, my healthy mom’s guide to dying well

My parents both turned 78 last week, and they remain so fit that I am unsure, at 51, if I can keep up. I know that they won’t always be alive, but picturing them gone is hard to wrap my mind around. It’s too painful. So I rarely dwell on that reality. 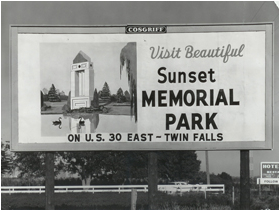 The cemetery where my parents will be buried used to advertise on billboards. (From Sunset Memorial Park website).

One surprising Sunday afternoon late last month cleared the hard-packed sand around my ostrich head, and helped me start accepting the fact of their eventual deaths. Especially if you’re in the sandwich generation and put off dealing with this reality, keep reading.

We were at a family reunion in their hometown of Twin Falls, Idaho. That afternoon, everyone else in our large family group was busy or declined when Mom announced her intention to go to Sunset Memorial Park, where many of her relatives are buried.

Family history is important to me, and I expected to feel peaceful putting flowers on my grandmother’s grave and paying respects to the other deceased.

But on the way there, Mom said matter-of-factly, “I also want to show you where your dad and I will be buried.”

So much for inner peace. 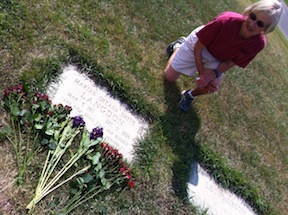 My mom Lorraine Hiskey, 78, at her mother Marian Langdon’s grave.

I felt this big hole open inside me. Like a butterfly, death can stay intangible until you pin it to a real place. I was scared. While I knew logically that the two people who have been rocks for me, my two brothers, eight grandchildren and three great-grandchildren would end up under the ground, seeing that spot meant it was a really going to happen.

Part of me wished I wasn’t along for this uncomfortable ride. But there was no turning back.

Twin Falls is a flat desert town that irrigation made bloom, and the sprawling lawn at Sunset Memorial Park is thick and deep green. These 32 acres had opened in 1937, the year after Mom was born.

In late 1996, we had buried her mom here on a cold December day. On this hot summer day, Mom placed fresh roses on Grandma’s grave and I mentally traveled back to the scent of Grandma’s Avon rose lotion that infused her home and made her junkyard seem so far away. 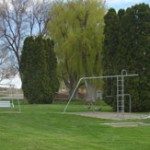 Time made me appreciate her even more—how she raised eight children, welded and ran her own scrap iron business, and was a force of faith and generosity. Seeing her gravestone, I thought of my cousins and their children and grandchildren, and Grandma’s silhouette in them. My sadness at her burial 18 years ago had transformed into deep awe and respect. Grief stayed a long time but did not win.

It was hard to stay morose as we looked around, especially when Mom noticed playground near the center of the cemetery. “That’s kind of strange,” she said, and we laughed at the juxtaposition as my fear of loss began to ease. 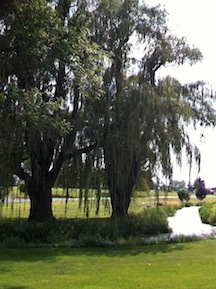 Where my parents will be buried. They are in excellent health, so this inevitability has been easy to ignore.

“Over there is where your dad and I have a plot,” Mom said, pointing to a lively stream where white and brown ducks paddled as if they were late to a party. It wasn’t adjacent to any of her relatives’ gravestones or plots, but only a matter of yards. My parents love to hike near water soothing like this.

“How did you decide that this was the place?” I asked. They had met in Twin Falls in first grade, but moved away from Idaho after marrying in 1958.

“Well, in the Bible it talks about taking your bones back home,” she said, referring to the story in Genesis of Joseph’s brothers returning his remains from Egypt to Israel. “It’s in our blood to go back to this land.”

I offered to take photos. “Oh that would be great!” Mom replied. “That will help me visualize it because sometimes it’s hard to remember the details.” When she returned to their home in Maryland, she planned to work on the wording of the gravestone she and Dad would share.

Steps to a milestone

Looking around at her relatives’ markers, I wondered what design my parents would choose. At Sunset, many of the gravestones depict outdoor scenes (like mountains or golf courses) or personal symbols (like the Mormon temple or Masonic star).

I couldn’t see how one chiseled stone slab could sum up their global mentoring ministry centered around the teachings of Jesus. Simple and direct text seems more like them.

Where had I felt and thought like this before? In the greeting card aisle, picking out the right sentiment for an important milestone. It’s the feeling of ritual, that there are certain prescribed steps we learn to take as we approach a threshold.

My parents have not designed their gravestone yet, but Mom says that’s next in her end-of-life planning. Her brother Archie, who is deceased, and his wife Mary Sue, who is not, designed this marker to highlight the mountains, fishing, and golf that they loved. The golfer figure is even left-handed just like Archie.

At 51, I was seeing my mom’s aisle of life in real time. The steps she was taking were what she needed at 78 to be ready for death. There’s power in choosing, and each decision helped her feel more ready. Watching her walk that path, I questioned my ability and strength to do the same. Her example always had been important to me, and I wanted to know more about her frame of mind.

A conversation about wisdom

About 10 days later, we talked on the phone. Another reason that I had avoided these end of life conversations was that many years ago they had told me that my older brother was their executor. I no longer wanted absolution; I wanted answers.

“Death is truly the biggest elephant in the room,” Mom said. “Individuals don’t want to admit that it’s a fact of life, so they can’t talk to their families about death. So we don’t open the door for others to talk about it, even though it’s a matter not of ‘if’ but ‘when.’ “

A big motivator for her detailed planning was the death of her mother-in-law (my dad’s mom) in 1995.

“I had just put your dad on a plane to Hong Kong, and when I came home the hospital called me,” she recalled. “By the time I got there, she was dead. I was so emotional, but everything had been arranged and your aunt only had to make one call to have it all taken care of. It was so wise.”

Wisdom became even more of a quest as she and Dad aged. For many years, she has been praying that God would prepare her for death, and specifically to “grow old gracefully.” Last year, she studied Psalm 90, which includes the verse, “Teach us to number our days, that we may gain a heart of wisdom.”

What that wisdom looks like today: “I have to face death realistically,” she said. “I have to accept and embrace that I honestly have so many days. That’s hard to think that I only have so many Christmases left—not in a morbid way but a realistic way.

“Some days I handle it well, but in some it’s also depressing. So I live in the present and appreciate people and tell them I love them and express my love and try to do as well as I can that day. I try not to get as upset about things as I used to.” 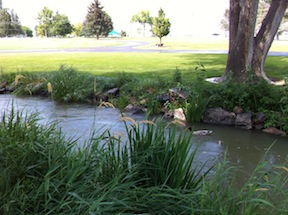 A stream with ducks runs near my parents’ cemetery plot in Twin Falls, ID.

Along with writing text for the gravestone, she and my dad are writing about their lives, what they have learned, and principles that have helped them. During their birthday week they wrote a lot. I asked her for an example.

“One principle is don’t back off,” she said. “My 40s were a real turning point for me. I went for counseling, and learned to visualize myself on a diving board. I can jump off the board, or back off and go down the steps.

And so she hasn’t backed off in the face of death. The cemetery trip was just part of the journey.

“Going with you was just another step,” she said. “That day, I felt so much peace. You taking those pictures helped me. Sometimes I have left there with sadness, but now I have more peace that Dad and I have made the right choice and that was a joy to me and a wonderful experience together, a blessing.”

Our time in the cemetery where my she and Dad will be buried gave me a clearer, more secure picture of our final goodbye. For that I am grateful that I said yes to going that afternoon.

More important was the conversation we ended up having about how to live with the inevitability of death. No matter what words end up etched into their gravestone, I always will hear her whisper three more:

Previous Article
Tensions mount on both sides of federal lawsuit opposing Tyler Perry’s studio plans at Fort McPherson
Next Article
Godfrey Barnsley’s dream: A southern Eden in the wilderness, its collapse, and a modern-day rebirth (Part 3)