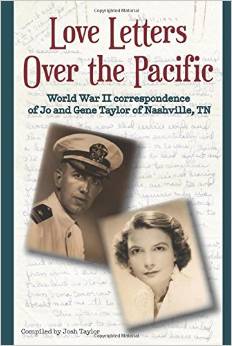 As the 71st anniversary of D-Day approaches Thursday, the memories of World War II are newly fresh for Josh Taylor, a semi-retired management consultant and longtime Atlanta resident. In a project that took almost a decade, he recently transformed a heavy box of 460 letters between his Navy dad and stateside mom into a published book. 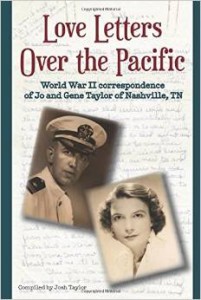 “Love Letters Over the Pacific” vividly portrays one couple’s separation for the final year of the war, him in Pearl Harbor helping plan the invasion of Japan, her moving between relatives and friends from Sarasota to Tucson, all while raising two sons (Josh and his brother Ben). The correspondence spans FDR’s last election and death, kamikaze attacks, V-E and V-J Day, the atomic bomb and more.

Amazon began selling the book May 7, and its publication is itself an act of love by Taylor, who spent about $15,000 on transcription, copy editing, design and publication. Its 756 pages represent the main message from the Greatest Generation that shaped him: “If you see a need, get involved.” So many families have a need to preserve important family history—especially if that history is on paper, not digitized. If sons and daughters don’t act, a lot of letters, photos and other important personal archives can be lost forever. That’s why Taylor got involved.

Taylor’s mother, Jo Taylor, lived an examined life; she had earned a master’s at Vanderbilt with her autobiography as thesis. She passed away in 1972. His father, Gene Taylor, was an actuary who had relocated to Nashville during the Depression. They married in 1939 and when the war broke out, he was eager to join up. Because of spots on his lungs, he was turned down the first few times he tried to enlist. His corporate connections got him into the Navy. 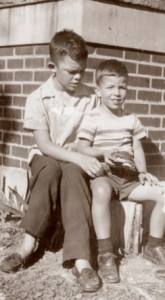 Josh Taylor (right) with his brother Ben, who were raised by parents separated by World War II.

Taylor first learned of the letters in 1995 from his father, who passed away in 2006 at age 96. They were filled with gems like Jo writing, “the first letter was just like butter on a hot biscuit to me,” and Gene’s response to her father’s deadly heart attack: “My confidence in you and assurance that you will do a ‘chin-up’ job is comparable in degree only to the love that I have for you.”

“I was fascinated because I’m a character in them, too,” Taylor said of the letters written when he was age 4, and included delightful specifics such as a fellow kindergartener who called him “Gosh.”

The letters’ content left Taylor with a great appreciation for the partnership and intimacy between his parents, expressed in the great number of abbreviations in the letters. These included “h.o.” for hangover and “S&S” for Scotch and soda. “Reading the letters made me a little bit overwhelmed with the alcohol consumption in my family,” Taylor said.

The letters also demonstrated a value his parents stressed to him: Details are important. When he set out on a journey to make the letters into a book, he kept that in mind. “This was a way to make a tribute to my parents, and I felt that if I was going to do it, I wanted to do it to a high quality standard,” he said. 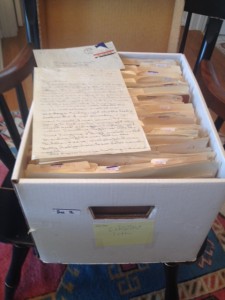 The box of original love letters between Jo and Gene Taylor.

Taylor does have a regret about this project, that his brother Ben Kingree, an Atlanta attorney, passed away in March before the letters were published. He was 80.

Some relatives have greeted the book with praise. “I am not just reading it, I am studying it,” a cousin in her late 60s said from Pittsburgh. “It is the most wonderful book of letters and all the details could never be captured in a novel.”

Taylor has this advice for family members who have paper archives like letters. “Save them, and if possible, have them transcribed into electronic format,” he said. “You don’t have to do a book.”

Even with a book, the original letters remain in the box.

“When questions come up, I have the originals,” he said. “I don’t know how I am going to pass that box along.” Perhaps with a copy of the book, for a thoughtful care package to future generations.